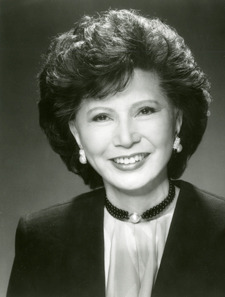 March Fong Eu often told the story of how she was born in the back room of the Chinese laundry owned by her parents, ensuring she would always be a clean politician. She became the first woman to be elected California secretary of state and the first woman of Asian descent to be elected to a constitutional office in the state.

A strong believer in the power of education, Eu earned a bachelor’s degree at UC–Berkeley and a master’s degree from Mills College prior to receiving her doctorate at Stanford. She worked as a dental hygienist and an educator in the Alameda County schools, and her interest in politics was sparked during her experience as president of the American Dental Hygienists Association. In 1966, she was elected to the California State Assembly, where she focused on education, the state budget, health, environmental protection, agriculture and equal rights. When, in 1974, she ran for secretary of state, she won with the highest vote total ever recorded. She was reelected to the office four times.

Eu worked tirelessly to support women’s and minority rights. One of her more memorable campaigns was a ban on pay toilets in publicly funded buildings in California. She took a sledgehammer to a chained toilet on the steps of the State Capitol to focus attention on what she viewed as a form of discrimination.

As secretary of state, Eu expanded voter outreach efforts and modernized election-night vote reporting, reformed notary public practices, streamlined the processing of corporate filings, and enacted the public disclosure requirements of the Political Reform Act. She brought attention to the California State Archives, a little-known division of the office, and remained its steadfast supporter throughout her life. In 1994, Eu accepted President Bill Clinton’s appointment to become the U.S. ambassador to the Federated States of Micronesia. After she retired from the political arena, she became a painter and calligrapher.

Eu’s daughter, Suyin Stein, remembers her mother’s ongoing involvement in politics and education when she was growing up. She also recalls how her mother took her to the Capitol on school breaks and holidays. “My mother ran for the board of education when I was 1, so I lived my whole life watching and contributing to her political career,” Stein says.

Eu was predeceased by her son, Matthew Fong. Survivors include her daughter; four grandchildren; a great-grandchild; and five stepchildren.

Julie Muller Mitchell, ’79, is a writer in San Francisco.

True to its roots, Stanford seeks to strengthen community bonds.