Six days a week, the men and women of Stanford Rowing slip their boats into the early-morning waters of San Francisco Bay and start cranking out the miles. They wouldn't have it any other way.

Two years ago, the Stanford men’s crew wanted to ease their morning crunch. Their early rows on the San Francisco Bay were leaving too little time for getting to class and — maybe more crucially — for consuming the piles of eggs, potatoes and waffles that two hours’ pulling an oar tends to make you crave.

And so they rolled back their departure time for the water to 5:45 a.m., 15 minutes earlier than had been the case, says Craig Amerkhanian, the team’s coach for the past 18 seasons. Problem solved. “It was the athletes’ idea,” he says. “I didn’t want to do it.”

It’s a solution only a rower could love — or at least one the average Stanford student would surely loathe, judging by enrollment in classes that begin before 10 a.m. But rowing at Stanford has long meant embracing a bleary beginning to the day. “Crew Arises While It’s Hazy; They’re Far from Being Lazy,” the Daily wrote in 1950, a headline still essentially true six days a week today.

It’s not just gluttony for punishment that inspires the early wake-up call. Open roads and open schedules make dawn the most efficient time to row. And most important, daybreak offers the best hope of a respite from the wind and chop that can force the slender boats from the heart of the Bay to the relative shelter of channels nearer the Redwood City boathouse.

“It’s very much worth it,” says junior Elizabeth Sharis, who sits in the women’s top boat, the first eight (teams race multiple boats, which are classified by number of rowers: eights, fours, pairs). “Especially at Stanford, the best water is in the morning. It’s extremely valuable for us.” 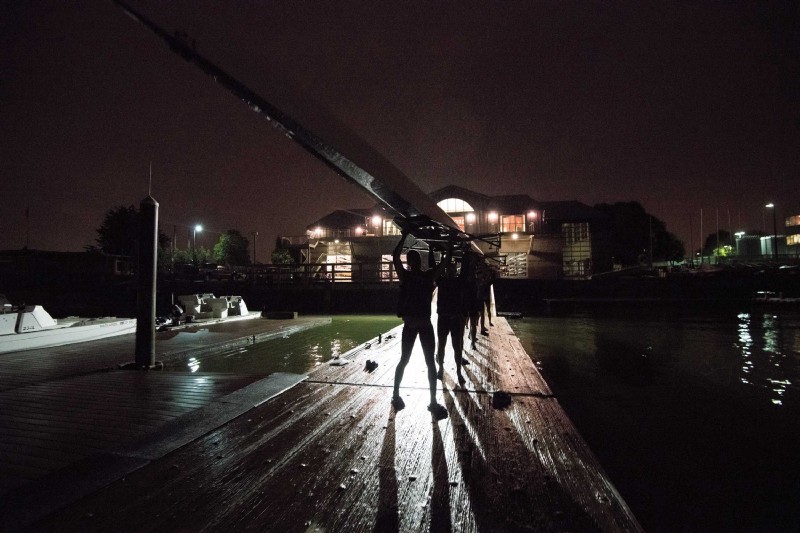 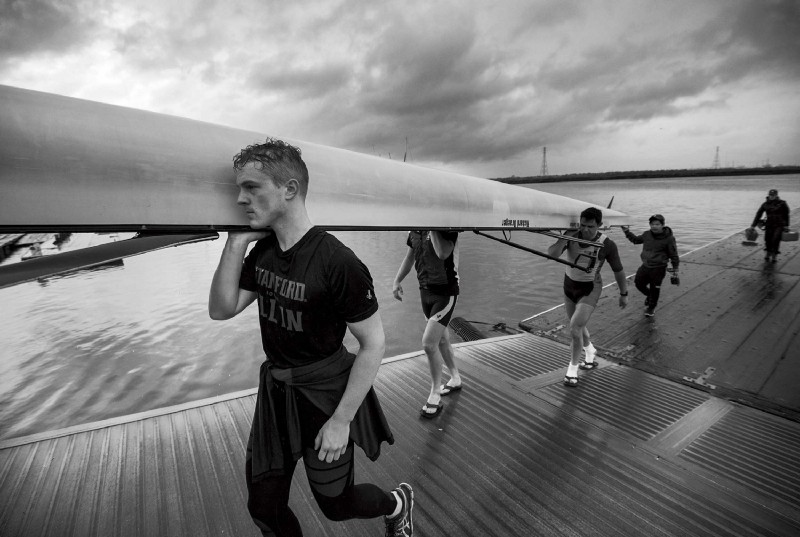 On this Wednesday in late February, the early hour is only one of the reasons a lesser spirit might pine for bed. A rare snow has fallen on Mount Diablo, looming in the east, and a soft frost covers the dock. Some of the coaches could pass for commercial crabbers in their cold-weather gear.

But the rowers from Stanford’s three teams — men, women and lightweight women — have on just thin second layers. As normal, they begin slipping into the darkness at about 6:10 a.m.; first, the men’s boats, followed by the lightweights’ and, finally, the women’s, one following the other in quiet choreography.

They’re still waking up, Amerkhanian says, watching two of his eights warm up to full strokes as he motors behind. To reach the day’s 25,000-meter goal — some 15 miles — the easy pace will soon give way to increasingly strenuous workouts pierced by Amerkhanian’s megaphone. “Throw it down, coxswains; throw it down, oarsmen; maul the water; maul it,” the coach yells.

Crew, he explains, is like cross-country on water. “Mileage makes champions. There’s really no other way.”

Rowing is among the oldest intercollegiate sports at Stanford, its racing roots extending to an inauspicious 1904 men’s duel against Cal. In front of some 1,000 spectators, two Stanford fours lost in separate races, the freshman boat suffering the double indignity of sinking at the finish. 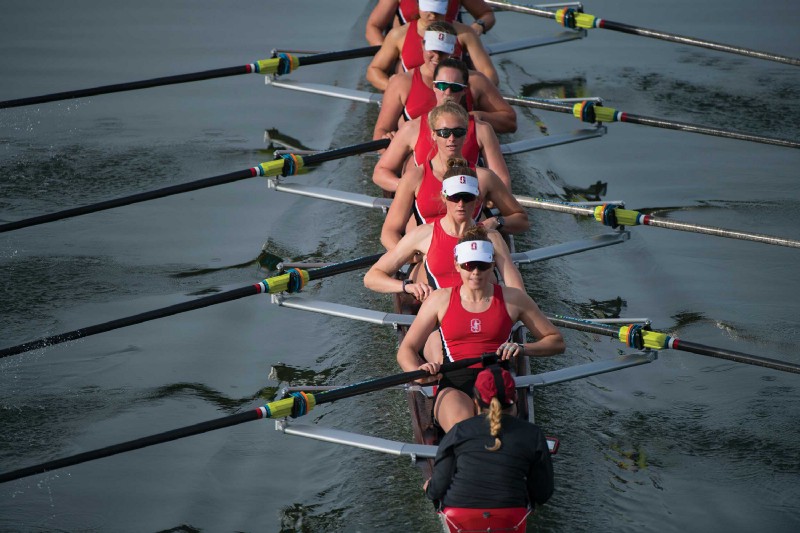 A decade later, though, the men shocked the sport’s Ivy League establishment by coming in second in the de facto national championships in Poughkeepsie, N.Y., very nearly catching Cornell at the finish. “Rowing Traditions of East Are Shaken,” the San Francisco Chronicle reported.

The feat, however, left the self-funded team so financially strapped it took nearly two years to ship its racing shell back to California, a foreshadowing of rough waters ahead. The program would cease in 1921 due in part to limited spectator appeal, not returning until 1939 and then again halting due to World War II.

But postwar, rowing has been a constant and growing force at Stanford, with the women playing a leading part. Women’s crew became a club sport in the early ’70s, a varsity sport in the ’80s and an NCAA sport in 1997. In 2009, the women won a national championship. Last year, its fastest eight placed second in the country.

Rowing is also one of the newer varsity Stanford sports, in the form of the women’s lightweights, which began in 2001. The lightweights — who must weigh in at 130 pounds or less before each race — are in the midst of a run of dominance: three successive national championships leading into this season. In the past eight years, the lightweight eight has won seven titles. 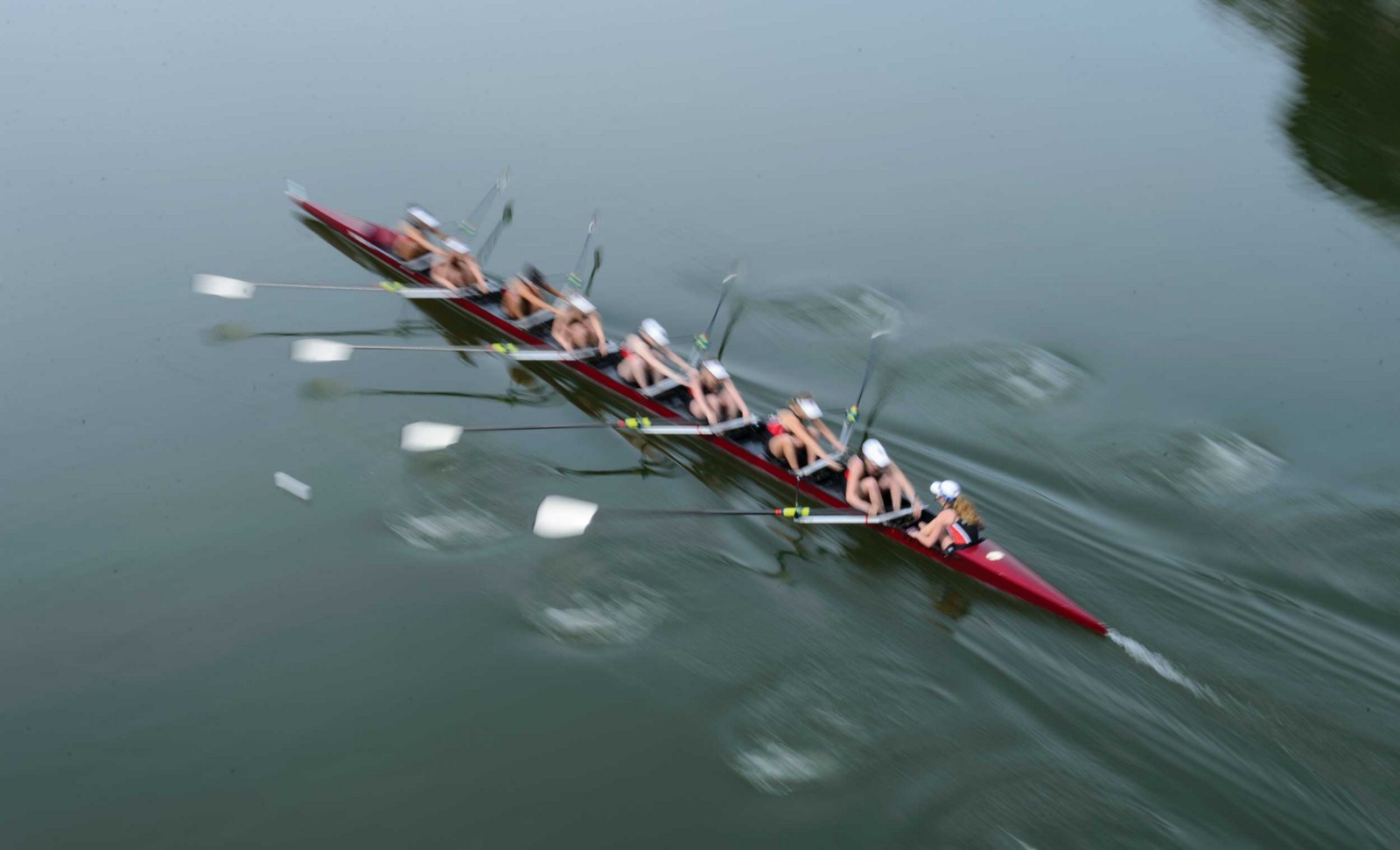 Even with such standards, rowing might be the only varsity sport at Stanford in which a rank novice has a chance not only to walk on but also to grind to the highest levels. To one side of the boathouse, a poster shows the four Stanford men who rowed at the 2012 Olympics in London: Jake Cornelius, ’06, David Banks, ’05, MS ’06, Alex Osborne, ’09, and Silas Stafford, ’08. Only one, Cornelius, had rowed prior to Stanford. (Elle Logan, ’10, the Pac-12 Rower of the Century, was also in London, winning one of her three Olympic gold medals. Like Cornelius, she was a high school rower.)

Karli Kirk, a senior, may not be on an Olympic trajectory, but she’s gone remarkably far in a short time. She found the sport as a sophomore while searching for something to give life at Stanford more structure and meaning (she also looked at rugby and archery). At the time, she probably couldn’t have run a mile. But she took a rowing PE class and then stuck with the team through a break-in period that all but flayed her fingers. 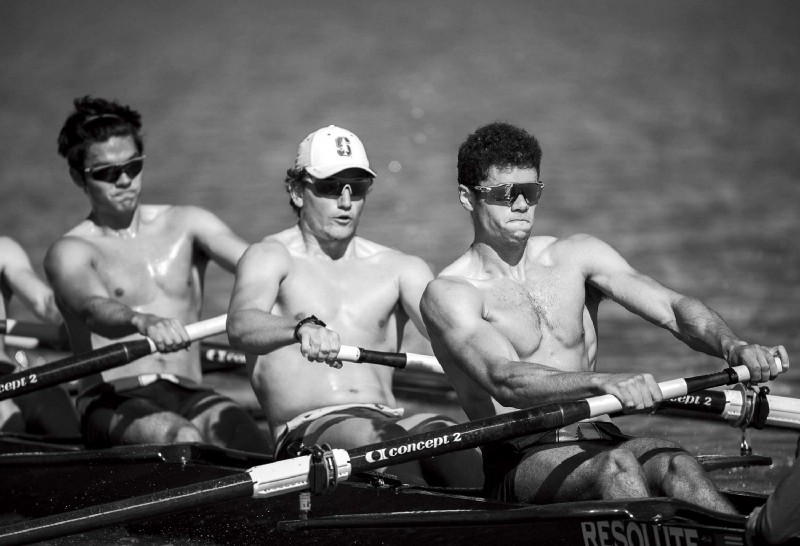 “My very first [afternoon] practice with the team, I got thrown into a boat and we did 18,000 meters straight, and I remember it getting dark, and being like, ‘Well, this is your life now.’”

Her commitment has never wavered, she says, and she trained even during summers. She’s now a member of the second eight and chasing a national championship. NCAA titles are decided by the performance of three boats — two eights and a four — each racing in separate events.

“It’s hard and sometimes it sucks, but I like that about it,” she says. “I have always liked to suffer. There’s really nothing else I’d rather be doing than rowing.”

The little that Nick Kingsley, a sophomore who played basketball and golf in high school, knew about crew before Stanford mostly came from The Boys in the Boat, author Daniel James Brown’s bestseller about the 1936 U.S. Olympic team — blue-collar guys from the University of Washington — who won gold against long odds. The book extols how eight rowers can reach perfect synchronicity to become “a poem of motion, a symphony of swinging blades.”

Intrigued, Kingsley sought out the team when he arrived on campus. “I honestly had no idea what I’d signed up for,” he says. 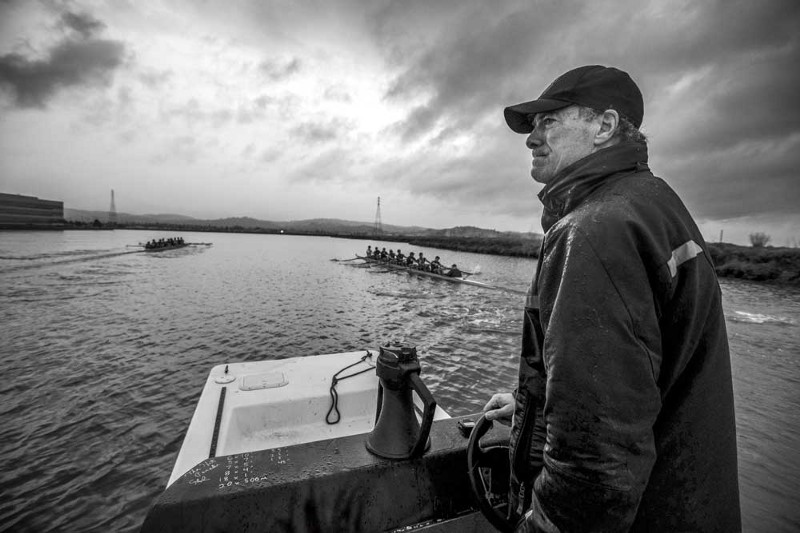 Two years later, Kingsley is in the second eight with a good chance to move up, Amerkhanian says. It helps that he’s six feet four. Rowing rewards reach, and most of his teammates are similarly tall. But his progress reflects his dedication. “He’s got that mental toughness,” Amerkhanian says. “Every day you can see his mind is just wrapped around what we’re doing.”

Rowing doesn’t feature positions as distinctly as many sports, but there are differing characteristics to the seats in an eight. The bow pair, at the leading end of the boat, are often skilled, graceful rowers, as the physics of the boat’s tapered design gives them an exaggerated influence on balance. The middle four — known as “the engine room” — are the heavy-hitting muscle. And the stern pair sets the pace, especially the stroke, the lead dog (despite technically sitting in the back of the boat, face to face with the coxswain), who Amerkhanian says most needs an “iron will and refusal to yield.”

A variety of things can go wrong in a boat, including “catching a crab,” where a rower’s blade strikes the water at an angle and plunges below the surface. In dramatic cases, a crab can send a rower flying from the boat.

The more mundane challenge is to simply get eight rowers in rhythm and in balance, all oars catching the water as one, all rowers sliding back for the next stroke in unison.

Rowing is repetition of explosive motions in a shallow-bottomed, easily unbalanced boat. Even minor discrepancies can turn the symphony into a discord of competing forces. “We don’t want to turn into a crew that wastes energy by spatting and talking during a piece,” Amerkhanian cautions his boats after one of the strokes vents his feelings mid-row. “It’s like having a piston misfire in a car.”

The one person who is always talking is the coxswain, who senior Madi Kist,
a cox for the women, describes as the brain in the boat. She was recruited into the position by a coach who noted her résumé: She was “pretty small and pretty loud,” and it turns out, a pretty good leader. “I really, really enjoy pulling the best out of people,” she says.

The cox’s responsibilities are many — from steering to coaching. In a race, the obvious corollary might be a jockey. Kist has to be aware of when and how to spur her rowers on. As a freshman, she found she could rouse her team with anger. If they were down, she might rev them up by saying, “That’s not good enough; you’re better than that.” Last year, she realized reassurance paid better dividends. “We’re down two seats — that’s nothing. Let’s get them back.” 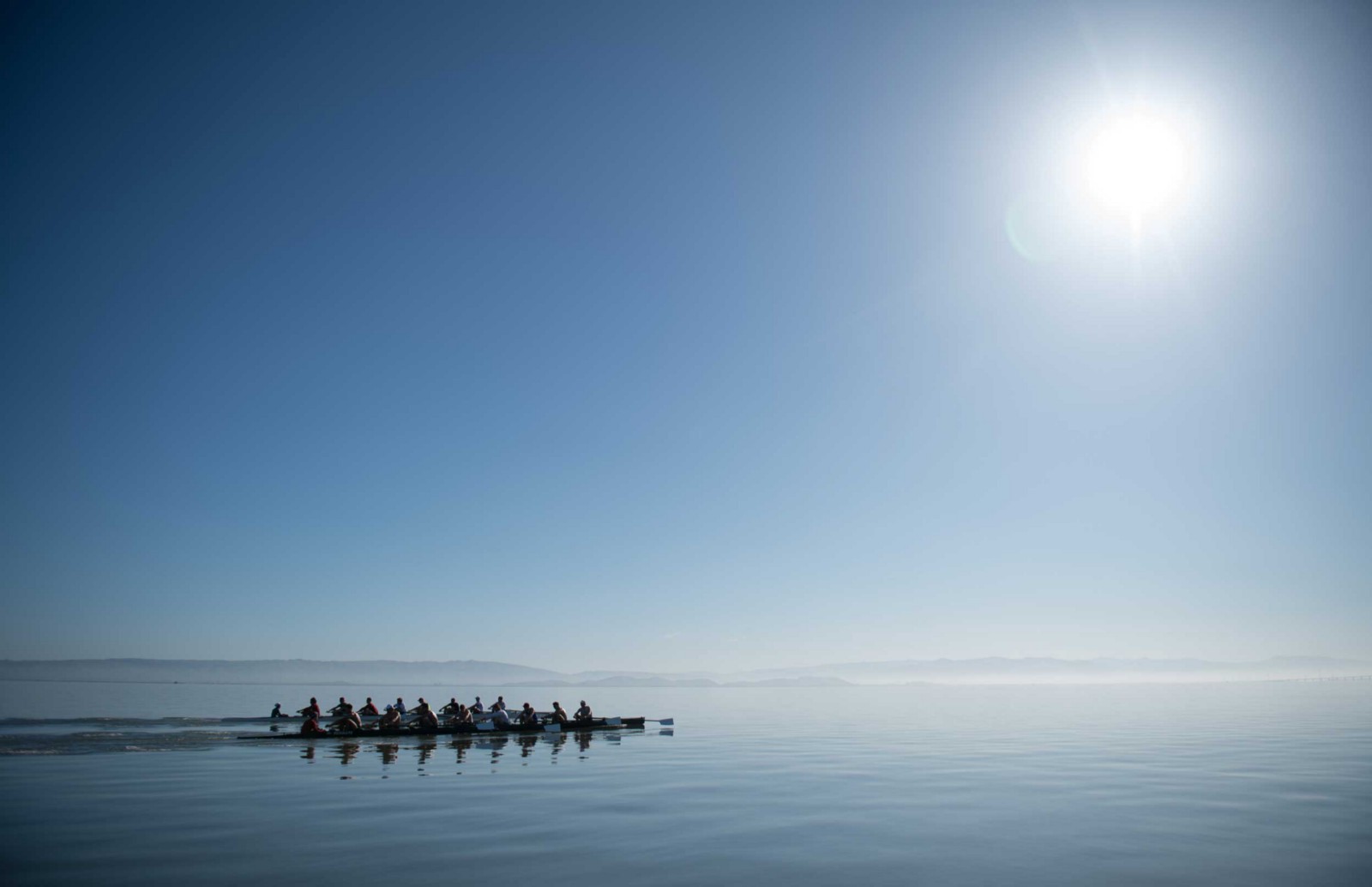 Either way, she’s trying to keep all eight rowers focused on one thing. “I am going to be their eyes, their ears and their brains,” she says. “All they should be worrying about is how can they pull harder.”

The morning water workouts are only half the day’s endeavors. Typically, the rowers reassemble in the afternoon for land workouts, often on the ergometers (aka “ergs”), rowing machines where the sport gets stripped of any romance of unity on the water. It’s just a rower, a machine and a screen that shows the rower’s split time, or pace. On the erg, each rower focuses only on his or her own output, something that doesn’t happen in the boat.

“The erg doesn’t lie,” says Sharis, the stroke for the women’s first eight, who also rows for the U.S. Junior National team. “It’s your number. You can’t really hide from that. It’s pain, but there’s so much reward if you put in the work and do well.”

Small wonder, then, that Kingsley says sometimes the best part of rowing is just putting it behind you. “I think it’s so rewarding because you’re so happy when you’re done,” he says with a laugh shortly after practice. “When you do have a lazy day, it feels so good.”

Until the alarm goes off.