A gig as a backup Avenger reinforced Kaeche Liburd’s determination to succeed in Hollywood.

The call from the casting agent sounded too good to be true—but then again, they almost always did.

You need to do this one, the voice over the phone said, in January 2019. This is gonna be one of the biggest films of the year.

Kaéche Liburd, ’09, had been in Los Angeles long enough to know that Hollywood handed out such promises far more easily than it kept them. Since moving in 2016 from her native St. Thomas to jump-start an acting career, Liburd had been balancing barista jobs with the kind of parts that sank straight to IMDb’s murky depths: the victim of a home-barbershop mishap in a fictionalized Judge Judy rip-off; an appearance in an Ariana Grande music video; a dancer in Jodie Foster’s 2016 film, Money Monster.

Still, any job could be the one that changed everything. Without any other information, Liburd took a bus to the North Hollywood address the agent gave her and kept her expectations in check as she waited to be buzzed in.

She recognized the costume the second she walked into the room. The earth-toned armor, fierce and undeniably feminine; the gold plating stretching across the shoulders and up the neck. It was the uniform of Okoye, leader of the Dora Milaje, the all-female special forces unit in the fictional nation of Wakanda. Like a perfectly aimed spear, Liburd’s career had plunged straight into the heart of the Marvel franchise.

The role wasn’t up for grabs. In the Marvel films, Okoye is played by the actor and Tony-nominated playwright Danai Gurira. Liburd was about to play a small but vital part in the production of Avengers: Endgame—a body double.

This was not where the former scientist had ever expected to end up. As a child growing up in a close-knit community in  St. Thomas, in the U.S. Virgin Islands, Liburd was active in dance and theater (“Can you ever hear music and not dance?” she remembers her mother asking, in response to another one of her impromptu performances). Yet the arts always seemed like child’s play compared with the laboratory career Liburd was certain she would pursue. She also knew exactly where she wanted to pursue it.

“I had an academic crush on Stanford,” Liburd, now 35, said recently over an outdoor lunch at a Jamaican restaurant in Inglewood, Calif., the traffic of La Brea Avenue rushing behind her. “I had made a decision, and the universe was going to bend to my reality.”

‘My mom would always say, “Only a fool doesn’t change their mind.” She let me be crazy.’

She didn’t have to look far for examples of people making the near-impossible look easy. Her siblings worked full time while attending school. Her mother, Ermine, rose at 4 a.m. each day and caught a ferry to open the kitchen at the high-end Westin St. John Resort, leaving Liburd’s sister Eldeana and brother Jason—her elders by eight and 11 years, respectively—to get her ready for school. When Jason enrolled at the local university, Liburd tagged along with him, sitting outside his lectures in advanced mathematics.

“My mom was very committed to education. I don’t know how a cook sent three children to college, but we always had what we needed,” Liburd says.

She arrived at Stanford in the fall of 2001, a first-generation student intent on a major in biomechanical engineering. (She later switched to human biology.) She took a few breaks along the way to travel, conduct diabetes research and volunteer for the 2008 Obama campaign, but she never seriously questioned whether a science career was her destiny.

But just a few months into her graduate work in epigenetics at Columbia University’s school of public health, rocked by the early deaths of a sister and several friends, she couldn’t do it anymore. Life was too short for work she found increasingly unfulfilling.

She went home to St. Thomas, where she found that her family’s belief in her wasn’t contingent on the letters after her name. When she announced that she was moving to L.A. to pursue an acting career, her mother bought her the plane ticket.

“My mom would always say, ‘Only a fool doesn’t change their mind,’” Liburd says. “She let me be crazy.”

It was a gamble that, in that North Hollywood studio, seemed to be paying off.

Body doubles make up an obscure but crucial battalion in the corps of professionals that bring TV and movies to life. Essentially, doubles fill in for the shots a leading actor can’t or won’t do, and are edited into the film so that an audience never realizes the switch. If an actor doesn’t want to perform a dangerous stunt, or bare her own bottom during a nude scene, or stand around all day for a scene in which she is visible only from behind, a director will cast someone who physically resembles her to film in her place.

For the most part, the diversity of people who can work as doubles is limited to the diversity of the faces on-screen. When actors of color play leading roles, their casting also creates opportunities for technical jobs that can go only to people with similar skin tone and body type, like body doubles or stand-ins (who stand in an actor’s place during setup while the crew adjusts the lighting).

In the case of Avengers: Endgame, producers needed someone who could fill in for Gurira and her stunt double in a few reshoots that didn’t require a close-up of the actor’s face. The question was: Could Liburd pass for the most powerful woman in Wakanda?

Three dressers helped Liburd into Gurira’s bodysuit, which fit as no other costume ever had. The shoes slid on like Cinderella’s slippers.

“Thank God for Ruth E. Carter,” Liburd said of the costume designer who won an Academy Award for her work on Black Panther. “It was like it was made for my body.” After another meeting to test her makeup and another with the director, she got the gig.

If an actor’s job is to play a character, a good body double’s job is to play that actor. Liburd obsessively studied clips of Gurira’s performances in Black Panther and Avengers: Infinity War, noting the way that Gurira’s hands flexed with a dancer’s precision just before a battle scene. With a broomstick serving as a makeshift weapon, she spent hours in the gym practicing Gurira’s grip on a spear, the precise angles of her elbows in battle. She noticed the way she held her head high, the laser-like intensity of her gaze.

On the day of the shoot, dressers suited her up with armor and gold jewelry. An assistant followed her with an umbrella, lest a drop of rain mar her makeup. And then they placed Okoye’s vibranium spear, a weapon that grows stronger by absorbing the energy around it, in her hands. She felt like a queen. Better yet: a warrior queen. 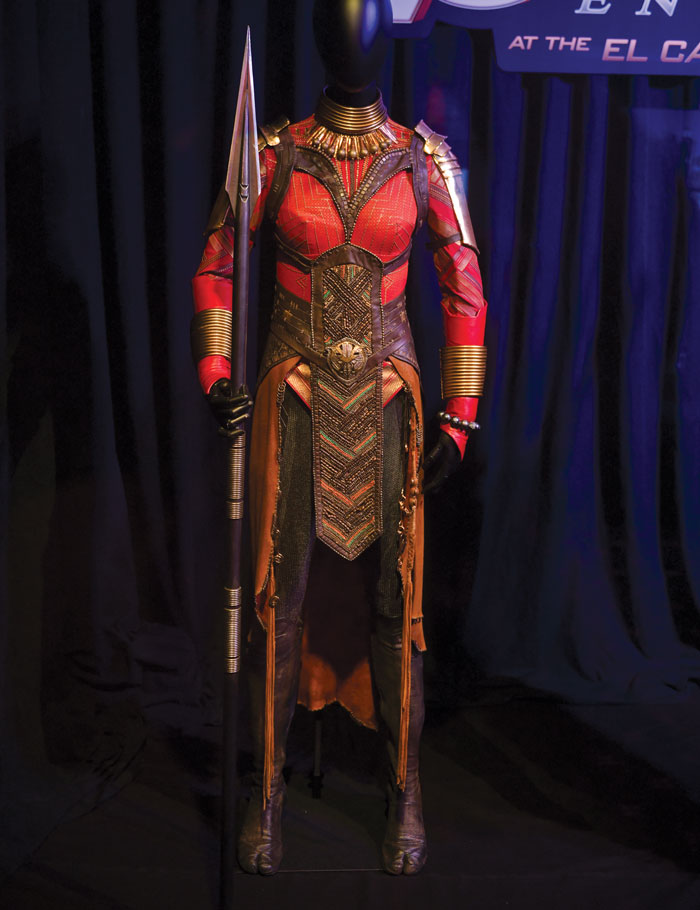 PERFECT FIT: “It was like it was made for my body,” Liburd says of the Okoye costume designed by Oscar winner Ruth E. Carter. (Photo: Rodin Eckenroth/Getty Images)

If you’re particularly familiar with the shape of her head, you may be able to make out the scenes when Liburd—or more accurately, Liburd as Gurira as Okoye—is running into battle in the film’s final cut.

It’s not the kind of screen appearance that earns an Oscar, or even a mention on IMDb. But being part of a blockbuster franchise—especially one that has smashed tired tropes about what superheroes should look like—boosted Liburd’s confidence and deepened her belief that an artist’s path is the right one for her.

She’s hopeful that her Marvel days aren’t finished. A speaking role in Black Panther 2 would be a dream, though she wouldn’t say no to doubling for Gurira or co-star Lupita Nyong’o, whose height and build are also similar to Liburd’s.

Tutoring math and science helps pay the bills between industry jobs (“I do use the Stanford degree!” she says with a laugh). Off-screen, she’s also looking for ways to add her voice and experience to an industry that’s often oblivious to inclusion. Marvel Studios, for example, reissued the official poster for Avengers: Endgame after critics pointed out that of 13 actors featured on the poster, only Gurira—the sole black woman—did not have her name above the title.

To that end, Liburd recently won a grant from the San Pedro, Calif.-based Center for Cultural Innovation, which will support her development as an artist. She plans to make a documentary about the black experience in her adopted city of Inglewood, south of Los Angeles.

Liburd says she’s often felt pigeonholed by people whose hang-ups about any one part of her identity—black, female, Caribbean, a Stanford grad and so on—eclipse the others. She wants to make art that highlights people in all their rich, messy, hard-to-categorize complexity. After all, she says, “superpowers can come in characters of all colors and cultures.”

Corinne Purtill, ’02, is a writer in Southern California. Email her at stanford.magazine@stanford.edu.