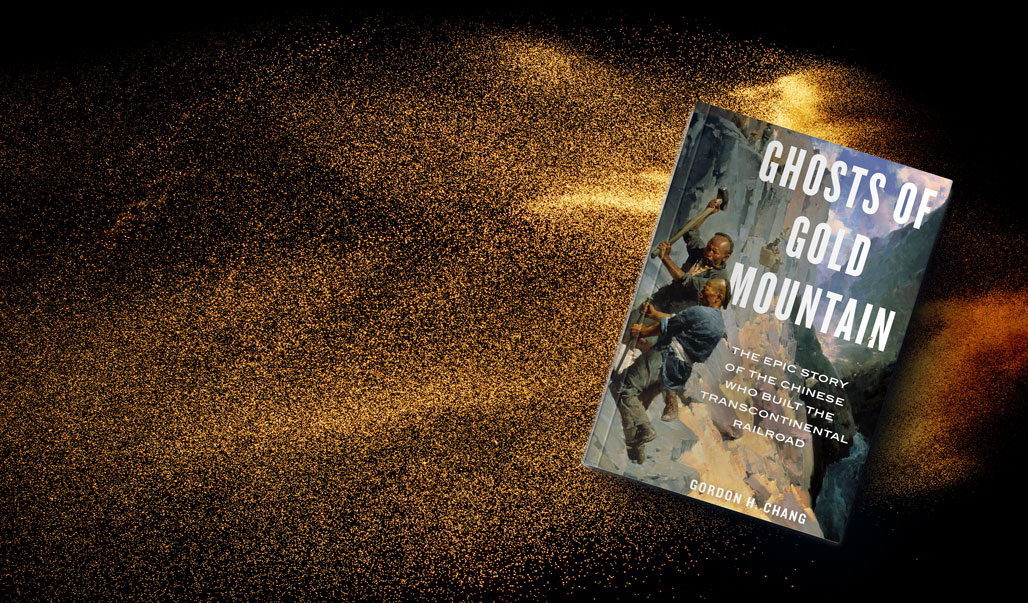 In the well-known photograph celebrating the completion of the United States’ first transcontinental railroad, two steam locomotives from east and west meet at Promontory Summit, Utah, on May 10, 1869. Engineers holding Champagne bottles high are flanked by scores of men.

Yet the Chinese railroad workers—the approximately 20,000 men who tunneled through granite and toiled in the desert, and who represented 90 percent of the Central Pacific Railroad Company’s labor force—are absent from the photo.

Today, they are front and center in Gordon Chang’s new book, Ghosts of Gold Mountain: The Epic Story of the Chinese Who Built the Transcontinental Railroad. Chang, a history professor at Stanford, presents the men as “vital, living, and feeling human beings who made history,” a remarkable feat given that, to date, researchers have not come across a single diary or letter from the workers.

Chang illustrates their efforts in detail, such as how, in winter, the men lived in caverns they had hollowed out of massive snowdrifts while continuing to tunnel through the mountains. Leland Stanford—a director at Central Pacific “whose prose was usually turgid and uninspired,” Chang notes—even rhapsodized about their impressive progress in a company report.

Imagine the noise, vibration, fatigue, and monotony but also the hellish confinement in those tunnels, lit only by oil lamp or candlelight!

The book portrays the workers in all their fullness: men who came to California from the impoverished province of Guangdong, and who sang, told stories, drank rice wine and whiskey, gambled, and worshipped gods and spirits. At times, Chang invites readers to take an imaginative leap of empathy, which places them in the workers’ shoes and serves as an aching reminder of the lack of their own testimony.

In 1867, some 3,000 of the men went on strike. At the time, it was the largest workers’ strike to take place against a private employer in the United States. Chang points out that this episode is often absent in studies about the American labor movement. Some readers may wish there were more of this broader context—though it seems beyond the scope of any one book.

The era’s rampant anti-Chinese sentiment has been covered extensively, so it’s eye-opening to learn in the book that news reports of the day marveled at the contributions of the Chinese to the national infrastructure and wondered whether they might one day be accepted as a “worthy” part of America. In the years that followed, though, the Chinese became scapegoats for economic woes, facing xenophobic mobs and massacres and enduring harsh immigration restrictions—themes that resonate today.

Ghosts of Gold Mountain is fascinating and deeply moving, and invites readers to consider how this country grapples with its past and its future.

Vanessa Hua, ’97, MA ’97, is a columnist for the San Francisco Chronicle and the author of A River of Stars and Deceit and Other Possibilities. The American-born daughter of Chinese immigrants, she lives in the Bay Area with her family.