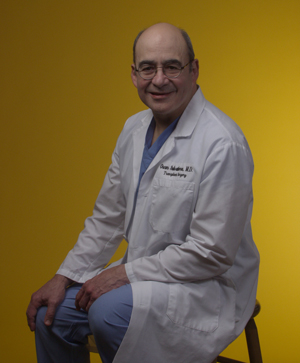 Gentle hands and a deep concern for patients marked Oscar Salvatierra’s career as it moved from combat surgery in Vietnam to an innovative pediatric kidney transplant program at Stanford.

Oscar Salvatierra Jr., professor emeritus of surgery and of pediatrics at the School of Medicine, died March 16 at his home in Menlo Park. He was 83.

In 2005, he developed tremors signaling the Parkinson’s disease that would end his surgical career and eventually lead to his death. He attributed his condition to exposure to the toxic herbicide Agent Orange in Vietnam, where he treated U.S. service members at MASH units and volunteered at a Vietnamese hospital for pediatric war victims. His war experience endowed him with a powerful empathy for the suffering of adults and children alike, says his wife, Pam.

The couple met at UCSF, where he was chief of transplant service from 1974 to 1991 and she, a registered nurse, worked as transplant coordinator. “We nurses knew he was a superior, caring physician,” Pam recalls. “Everybody wanted to be Oscar’s OR nurse because of the way he approached patients.”

Salvatierra was part of a group of surgeons and staff who moved to Stanford in 1994 to establish the pediatric liver and kidney transplantation program at Lucile Packard Children’s Hospital. There, he questioned the use of steroids for immune suppression in children, due to the drugs’ life-altering side effects. By the early 2000s, he completed clinical trials for a new steroid-free technique that has been widely adopted. He also developed methods that enabled young children to be transplanted with adults’ kidneys, including those of their family members.

At Stanford, Salvatierra mentored many students, researchers and clinicians, including transplant surgeon Minnie Sarwal, now at UCSF. “An amazing man,” she says. “He’s the reason I stayed so long at Stanford. He embodied the successful intersection of clinical and bench research.”

Neil Gesundheit, Stanford’s senior associate dean for medical education, spoke at Salvatierra’s memorial service in May. Salvatierra was, in Gesundheit’s words, “a good doctor, teacher and scientist who was also a humanist.” He added, “I never saw a cynical side to him. He was a genuine idealist.”

In addition to his clinical work, Salvatierra helped then-Rep. Al Gore pass the National Organ Transplant Act of 1984. The legislation, which established a nationwide network for organ donation and banned the buying and selling of donor organs, became a model for similar laws around the world.

Among his many honors, Salvatierra received Stanford’s Rambar-Mark Award for Excellence in Patient Care, and the International Pediatric Transplant Association recognized him with a lifetime achievement award in 2019.

Decades before the onset of his own disease, Salvatierra served on an advisory board in charge of channeling funds from the $180 million Agent Orange litigation settlement to military veterans. Later the U.S. Department of Veterans Affairs would designate him 100 percent disabled from Agent Orange exposure.

“In 2005, he called me into his office and showed me the tremors in his hands,” Sarwal says. “I cried. He kept calm. As a legacy, he trained the next generation of surgeons.”

Salvatierra is survived by his wife of 25 years; children, Lisa Rudloff and Mark; four grandchildren; and five siblings.