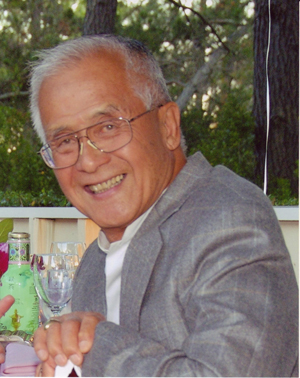 When George Leong arrived at Stanford in 1943, he lived in the modest Chinese clubhouse (since torn down) along with a handful of other Asian American students. He’d grown up in Yuma, Ariz., where his parents, Chinese immigrants from rural Guangzhou province, ran a grocery store catering to nearby military bases. An Arizona state tennis champion and a competitive boxer and wrestler, he was one of about 60 promising high school juniors who’d been handpicked by the federal government to start college a year early.

A go-getter who is remembered for his seemingly boundless energy and initiative, George Francis Leong, ’46, MA ’47, PhD ’51, died on February 13 at age 93.

Leong not only got a head start on his studies at Stanford—he finished his degrees in short order, taking just three years to complete a PhD in physiology. But as Helen (Chinn, ’48, MA ’49), his wife of nearly 70 years, can attest, he wasn’t just clocking the hours at Meyer Library.

He teamed up with his friend and fellow tennis player Bob Wo, ’46, sandbagging doubles opponents who assumed they didn’t know how to play the game. Then there were regular trips to the all-female Mills College in Oakland, where Wo’s high school sweetheart was enrolled. George and Helen would squeeze Wo’s girlfriend and several of her Chinese American classmates into a four-seater Buick to attend dances at Stanford’s Old Union Clubhouse Ballroom. Organizing dances was one of the many ways Leong strove to create opportunities for Chinese students to build community.

Leong, a specialist in liver cancer, began his career studying the effects of radiation at the U.S. Naval Radiological Defense Laboratory in San Francisco, becoming chief of its biological and medical sciences division. In 1969, he was called to join the Department of Health, Education and Welfare (now Health and Human Services) in Washington, D.C., a move that made him the highest-ranking Asian American in the civil service. He then worked at the FDA, where he was known for streamlining the unwieldy process of drug testing by introducing 90-day drug trials. Leong later became a consultant in the pharmaceutical industry, advising clients on how to apply rigorous ethical and scientific standards in developing their products to ensure FDA approval.

He retired in 1999 after receiving a cancer diagnosis. As he was prepped for surgery, his daughter, Stephanie, recalls, Leong told the medical staff that in his FDA post he had rejected the primary drug they were giving him, sending it back for more testing because of its unacceptably high mortality rates. He was then asked if he would like to stay awake for the procedure, a suggestion his family quickly nixed, saying that the gregarious patient would distract the doctor.

According to Cindy Ng, director of the Asian American Activities Center (A3C), Leong’s efforts to bring awareness to the Chinese student community at Stanford set an example for other minority groups to follow, and in 2004, he played a critical part in planning for Stanford’s first Minority Alumni Conference. He and Helen, a scientist turned venture capitalist, were early advocates for inclusion, and they continued to host regular Stanford alumni events at their Atherton home for half a century.

At a Memorial Church service in May, Leong was honored for his many gifts to Stanford, for the scholarships he and Helen funded through the A3C, and for supporting the Stanford research center at Beijing University, which opened in 2012. Ng applauded Leong’s efforts to enhance the experience of generations of Asian American students, who now comprise 22 percent of Stanford’s undergraduate population: “He paved the way and laid the foundation upon which today’s vibrant Asian American community is built.”

Leong is survived by his wife, daughter and son, George Jr.