Preventing the Next Plague 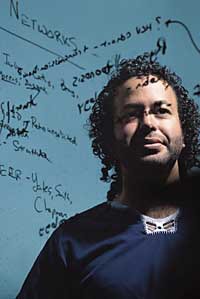 Nathan Wolfe often starts his day by climbing into a battered Toyota Land Cruiser and bouncing along the muddy roads of a central African jungle. He is out for blood. A professor of epidemiology at UCLA, Wolfe, ’92, has spent more than half his time over the past five years in Cameroon, looking for subsistence hunters who hunt and butcher monkeys, chimps and other wild animals for food. His research has shown that hunters like these may be the key to understanding the origin of viruses like HIV/AIDS that begin in animal populations before spreading to humans.

On a recent foray to a rural village, Wolfe and his team located a group of these “bushmeat” hunters and asked them to provide samples of their blood, along with blood smears taken from animals killed during their hunting trips. You can probably guess the hunters’ reaction.

“When we tell the hunters that we want them to dab the blood of their prey on these little filter-papers we give them, they often stare at us like we’re from Mars,” Wolfe says. “They think we’re lunatics at first, but once we explain what we’re doing, they’re usually willing to help.”

Wolfe and his research team, along with collaborating scientists at the Centers for Disease Control and Prevention, use a variety of tools to analyze both the human and animal specimens, searching for viruses that have recently crossed from wildlife to humans. They’re looking for known killers such as Ebola, monkey pox, Rift Valley fever, avian flu and dengue, as well as undiscovered viruses.

Wolfe’s efforts have produced striking results. While working at Johns Hopkins three years ago, Wolfe and his team made headlines by discovering primate retroviruses in the blood of three African hunters. Retroviruses are pathogens that attack cellular DNA, invading the host’s genome. They have killed more than 22 million people worldwide; most of these deaths are attributable to HIV/AIDS. But until Wolfe and his colleagues reported their findings in The Lancet in March 2004, nobody had demonstrated that retroviruses could cross directly from jungle primates to indigenous hunters.

The transmissions he documented probably occurred, says Wolfe, when hunters cut themselves or otherwise came in close contact with primate blood and body fluids. He believes his findings offer powerful evidence for the theory that HIV/AIDS originally entered the human population during interactions between African hunters and primates.

The Lancet study showed that about 1 percent of the 1,099 blood samples Wolfe collected from Cameroonian hunters contained antibodies to Simian Foamy Virus, a primate retrovirus named for its tendency to kill cells in culture, creating a foamy-looking mess under the microscope. Although Wolfe says we don’t know whether SFV can cause illness in humans, finding it in the hunters showed how monitoring them and their animal prey could provide “sentinel warning systems” to predict future viral pandemics.

By documenting the frequent crossover of primate retroviruses to humans and alerting CDC officials to them, he and his colleagues have challenged the long-held assumption that cross-species transmissions of the kind that produced AIDS are rare. “Our research shows that these transmissions are actually happening all the time—which suggests that it might be possible to establish a new kind of surveillance system for many emerging infectious diseases by looking for viruses at the interface between humans and animals,” Wolfe says.

“Imagine how different the AIDS epidemic might have been if we’d had three to five years of advance warning. I’ve been convinced for a long time that we need to challenge the old model of the ‘fire brigade response’ to pandemics. We need a new disease forecasting model that could help us prevent them, not just respond to them.”

Wolfe, who became interested in cross-species transmission while studying orangutans in Borneo for his Harvard doctorate, combines techniques culled from molecular biology, ecology and anthropology to create what he calls “the biology of viral emergence.” Armed with a five-year, $2.5 million Director’s Pioneer Award from the National Institutes of Health, he’s put together a network of tropical field sites in Central Africa, South America and Southeast Asia. He has waded jungle streams and tracked hunters on foot in pursuit of the origins of viruses. The toughest part of the job, he says, is working out the logistics. “We sometimes have to drive 20 hours on forest roads to get our samples back to the lab in Yaounde [the Cameroonian capital]. If we come upon a downed tree, we have to climb out and dig around it. Getting samples to the lab while they’re still viable can be a thrill a minute.”

Wolfe’s Johns Hopkins colleague Donald Burke says Wolfe “is one of that rare breed of scientist who combines exceptional creativity with dogged persistence.” To move samples out of the country, Wolfe must spend months obtaining permits from nervous customs and health officials who aren’t eager to have jungle viruses exported to America.

Hunting for antibodies and viral DNA in blood samples can be “tedious, repetitive work,” says Wolfe, who admits that “I’d much rather be out in the field.” But when the lab grind pays off, the results can be invigorating. About three years ago, he spent several months running tests with his colleagues at a CDC lab in Atlanta. Working 16-hour days, he sat listening to music on his iPod while conducting hundreds of assays in search of SFV.

For weeks, he got nothing but negatives. Then one day he spotted a unique pattern of dots—a pattern that revealed the presence of viral antibodies in a human blood sample. “I realized that I was looking at evidence of an animal retrovirus in the hunter’s blood,” Wolfe recalls, “and I said to myself, ‘Where’s the nearest bottle of champagne?’ All along, I’d felt like the odds were against us, and I was pretty skeptical. Running the tests often felt like a crapshoot—but I like scientific crapshoots, and I believe science should do more of this kind of high-risk research.”

A human biology major at Stanford, Wolfe says the high point of his undergrad experience came during his year at Stanford in Oxford, which included a tutorial with legendary biologist W.D. Hamilton. “I felt intimidated at first,” he recalls, “but Professor Hamilton was very understated and generous and really enjoyed sitting down and chatting with his students. And the program itself was amazing. I remember looking at a tray of beetles in the Oxford University Museum, where I was working on an exhibit. The beetles had been tagged, and the handwriting was Charles Darwin’s!”

That close encounter with Darwin continues to resonate. Wolfe sees himself “as a kind of old-fashioned, 19th-century collector of biological specimens—what they used to call a ‘natural philosopher’”—rather than as a high-tech genetic analyst.

“In some ways, I think of myself as the curator of a natural history collection,” he says. “But in my case, the organisms I’m studying just happen to be viruses.”

Although a few viruses have been studied extensively, Wolfe says, “most of that work was done within a medical model, and we know almost nothing about the rest. But viruses actually form a huge biological kingdom unto themselves, and learning more about our interaction with them could produce many benefits—including the opportunity to control and maybe even prevent disease outbreaks in the future.”

TOM NUGENT is a Michigan-based writer.