Blazing a trail with wit and empathy, Deb Price let readers into her life and neutralized homophobia with candid accounts of quotidian concerns she shared in weekly columns. 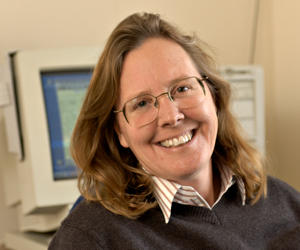 Deborah Jane Price, ’81, MA ’81, died November 20 in Hong Kong of an autoimmune lung disorder, according to her wife and sole survivor, Joyce Murdoch. She was 62.

Price, the daughter of an Episcopal priest, began her journalism career at the Northern Virginia Sun and the Washington Post before joining the Detroit News, where, in 1992, she pitched what would become the first column on LGBTQ+ issues to be nationally syndicated in mainstream newspapers.

Her move was bold and her timing opportune, as the AIDS epidemic had frightened straight America and focused negative public attention on gay men’s lives. She would write more than 900 columns over 18 years before accepting a Nieman Fellowship at Harvard, where she studied Chinese history and politics. After her fellowship, she became the Southeast Asia editor of the Wall Street Journal, and, most recently, she worked for the South China Morning Post, based in Hong Kong.

Price’s columns were intended as a spirited and good-natured corrective to disapproving stereotypes. She visited a gay rodeo, referenced Bugs Bunny’s flirtations with Elmer Fudd in noting the rise of gay studies, and skewered sodomy laws and the ban on gay service members.

“I chose a very personal style, inviting readers into my home life,” she wrote in the introduction to her 1995 collection of columns, And Say Hi to Joyce: America’s First Gay Column Comes Out. Her inaugural column, Price recalled, “described how awkward it was for me to try to introduce the woman I love to my boss because no universal language exists to describe gay couples.” So she solicited suggestions, and readers responded: One proposed “lovemate” while another offered “partner in perversity.”

She discounted the barbs. “I think it’s really important for me to remember,” she told the Associated Press in 1992, “that if there weren’t hostility and if there weren’t misunderstandings about gay people, there would be no point in doing this column.”

“It’s hard to overestimate how significant this was,” tweeted Joshua Benton, founder of Harvard’s Nieman Journalism Lab, after Price’s death. “Most Americans in 1992 said they didn’t know a single gay person. Then suddenly there was Deb on the breakfast table, next to the sports section.”

Her work was groundbreaking, both for its subject matter and its reach. “She was not singing to the choir,” Murdoch told the Detroit News. “She was singing to people who had not heard a voice like hers before. She was making a difference slowly, week by week, in how they saw things.”

A new vision for undergrad housing.