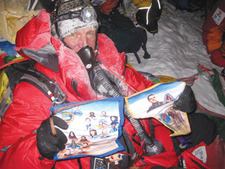 In the spring of 1992, Scott Parazynski, then an emergency medicine resident, was two months into planning a climb of Mount Everest when NASA came calling. Everest would have to wait. Fast forward 17 years—57 days, 15 hours and 34 minutes of which he spent in space aboard five shuttle missions. On May 19 of this year, Parazynski, ’83, MD ’89, became the first astronaut to stand atop the 29,029-foot peak of Earth’s highest mountain. As a totem he carried small pieces of moon rock, collected by Neil Armstrong on the 1969 Apollo 11 mission. An accomplished climber, Parazynski, now 48, likens the physical and mental discipline that such an ascent requires to preparing for a spacewalk. He would know, he’s done seven. Still, he counts Everest as the most difficult thing he’s ever accomplished. “For me, what Everest means is achieving a personal goal that is very, very difficult . . . the ability to stand in a place where very few people can go.”