How one tiny cactus boosted my will to give. 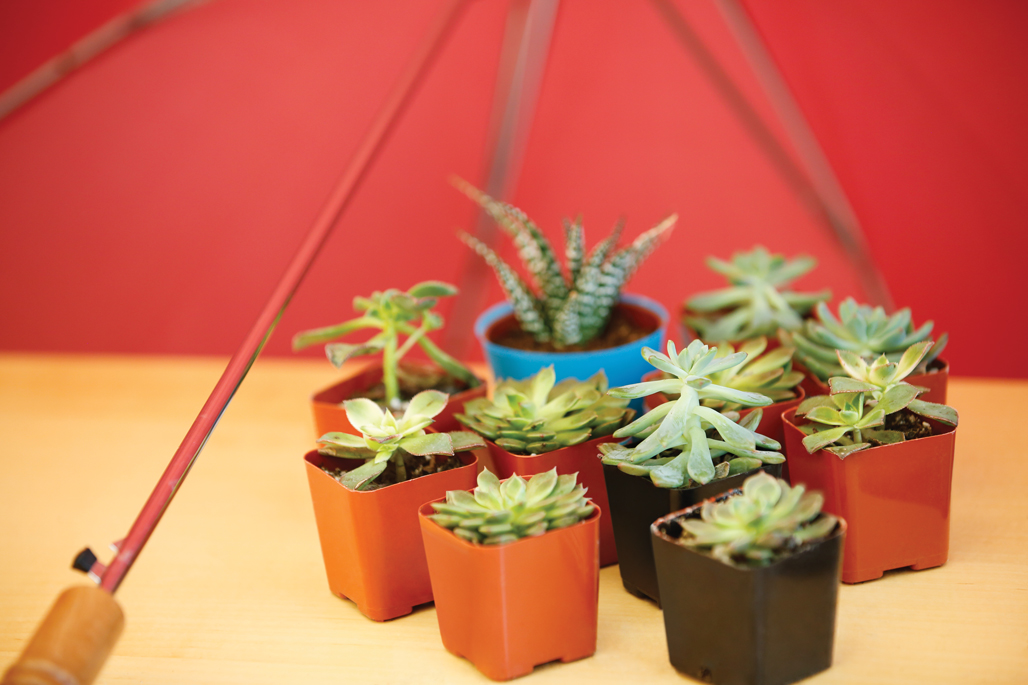 On a rain-cloudy morning in November, as I walked from the train station in Palo Alto to a meeting at Stanford, my thoughts wandered from where I might borrow an umbrella to a question I’d been asked the day before: “What do you have to give?”

I was at a reunion of GSB communication coaches from the past 10 years. Twenty or so people attended, including a few who phoned in from exotic places like Sweden and New York City and Omaha, Nebraska. Everyone offered an update on their coaching work, and then my former boss—who’d hired most of us at one time or another—asked us to answer two questions: “What do you need?” and “What do you have to give?”

My first thought: I don’t need anything.

Second thought: I’ve never asked myself what I have to give.

Truth is, I’m not giving-oriented. Oh, there are a few things I do that I’d like to regard as generous, and I pick up the check when I think it’s my turn, and I’m very aware of trying to pay forward at least a small share of the generosity I’ve received from so many people no longer around to be paid back—but I definitely don’t go looking for opportunities to give.

In the midst of this walking meditation, a golf cart pulls up, and the driver asks if I’d like a succulent. The woman in the passenger seat holds on her lap a cardboard tray filled with cute little cacti in tiny containers.

“Sure,” I say. “My older daughter loves succulents.”

“Take one for her too!” the woman says enthusiastically.

I don’t want Nancy to think I’m giving her the cactus because I want an umbrella.

So she hands me a tiny cactus, and as the golf cart glides away, I read what’s printed on the container—something about #GivingTuesday, and an invitation to give the cactus to a person at Stanford who makes my life better.

I know immediately whom I want to give the cactus to, the same person I want to ask for an umbrella—Nancy, the den mother of the sector I work in, the person who always keeps granola bars handy, along with chocolate kisses, Band-Aids and whatever else anyone might need. But I don’t want Nancy to think I’m giving her the cactus because I want an umbrella.

Meanwhile, I can’t help smiling as I walk on. I feel elated; even the air seems to sparkle.

At Nancy’s desk, I tell her the story of the golf cart and the cacti, and when I give her the cactus, she stands up, hugs me, and dabs a few tears from her eyes. When I received the cactus, I felt happy, but Nancy shows her happiness, a full display, and it’s contagious. I feel almost teary myself.

When I ask her about an umbrella, of course she finds one in her bottom drawer and hands it over.

Later, trying to slip out of my meeting early, I’m asked for my “Rose and Thorn”—a highlight of the week and a difficult moment. I know my Rose, and I quickly tell the story of getting and giving the succulent.

“The cactus has the thorn!” my current boss says.

Since then I’ve been ruminating about the pleasure generated from one tiny gift. And I have a new question I intend to start asking myself more often: “What do you have to give?”

David Schweidel, ’76, has been a GSB communications coach for seven years. He recently wrote a musical inspired by the Patty Hearst saga.