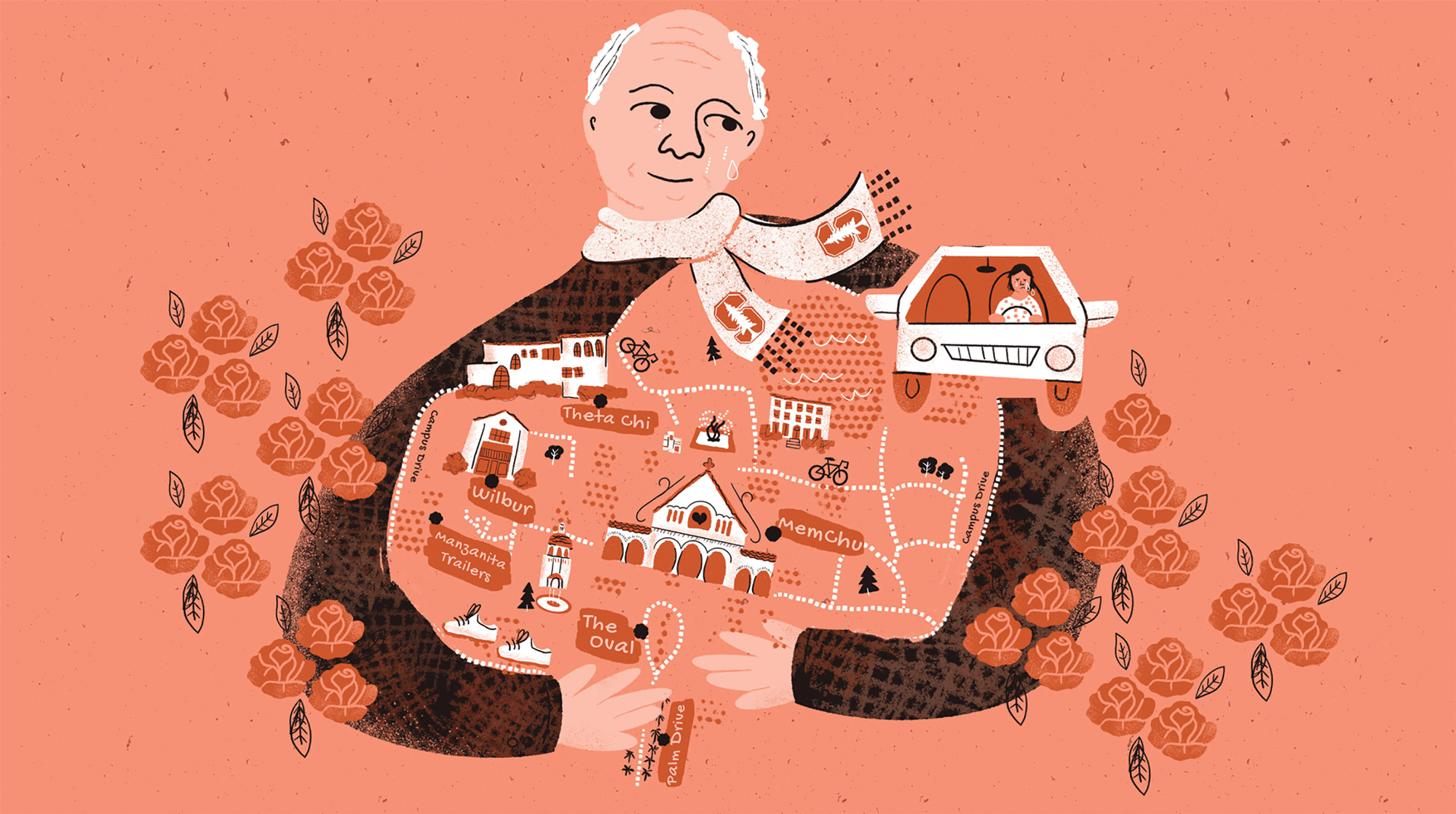 During a Zoom break this past December, I realized I had an hour or so between my main task that day and an appointment downtown. When it occurred to me that I should use that time to drive around Stanford, a physical wave of grief came over me, buckling my knees.

My main task was to pick up my father’s ashes. I placed the heavy black velvet bag in the passenger seat of my car and, in tears, called Dad’s closest friends with an unusual offer—to stop by their house so they could say goodbye. They hadn’t seen Dad in person since the beginning of the year, and, like most families who had suffered a loss in 2020, we weren’t planning a service.

Wearing masks, his friends greeted me solemnly in their front yard. After spending a few reflective minutes with them, I headed back to the car, which I realized was filthy. Every week, my father had washed all the cars parked in his driveway, whether or not they belonged to him. It was one of his ways of taking care of us. On this day especially, driving around in a dirty car just didn’t feel right. So, I headed to a nearby car wash, where I generously tipped the workers, as he had taught me to do.

Every week, my father had washed all the cars parked in his driveway, whether or not they belonged to him.

As I turned onto Palm Drive, I thought of Dad arriving on campus in 1959, and my mother, and the many other generations of students who had taken that same route. The entrance to the Oval was closed, but I could see MemChu, where Dad had walked me down the aisle, concentrating so hard on not crying that he didn’t hear the music of the trumpets playing in the loft. I began the long loop around Campus Drive, past the eucalyptus groves, where my parents had tailgated with their friends, enjoying the camaraderie more than the football, and then the track, where Dad had run as an undergrad.

A little farther down, I noticed a new underground garage where the Manzanita trailers used to sit. When my sister lived in Manzanita, Dad had insisted on replacing the gross carpet. Then there was Wilbur, where each of us had spent our freshman year. A Law School building has taken the place of Kresge Auditorium, where I took Econ 101, Dad’s suggestion in response to my declaration that I wanted to major in English. On the left, his Theta Chi fraternity house, where he built lifelong friendships with classmates who now live around the world. I reflected that we didn’t hear many stories about when he lived there, and then decided that was probably just as well.

The driving was easy on the nearly empty campus. A few more memories surfaced, and at the next roundabout, I headed toward the hospitals. The children’s hospital, now rebuilt, where he’d given 29 roses to his first grandchild, born on the 29th day of the month. The main hospital, where his son-in-law’s life was saved. And the cancer center, where he and my mother had both embodied the word patient, enduring years of treatments that ultimately failed.

I turned onto Palm Drive once more, the circle complete.

Alison Cormack, ’88, MBA ’93, is the daughter of Ann Miller Cormack and Robert Graeme Cormack, both Class of ’63. She majored in history and economics.

Change Is Crucial, and Slippery

What a sea cucumber taught me about survival.