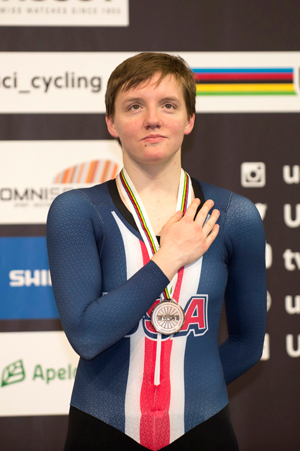 Kelly Catlin was many things: daughter, triplet, horse lover, Harry Potter fan—and silver medal–winning cyclist at the 2016 Rio Olympics. This past January, Catlin suffered a concussion during a training ride. Two months later, she died by suicide in her campus residence.

Kelly Ann Catlin, who was pursuing a master’s degree in computational and mathematical engineering while continuing to train, died on March 8 at the age of 23.

Her relatives believe Catlin’s suicide was almost entirely due to the concussion. “Our family has shared the story of her death in the hopes that it might help prevent other senseless deaths,” her father, Mark Catlin, a retired pathologist in Minnesota, says via email. “In particular, we are concerned about the myriad consequences of concussions.”

She was a three-time UCI Track Cycling world champion, a 2016 Olympic silver medalist in the team pursuit event, and a member of both the USA Cycling National Team and the Rally UHC Pro Cycling Team. “For me, Kelly was the ultimate professional and always gave 110 percent,” says Gary Sutton, her head coach at USA Cycling. “Kelly always set the standard for her teammates to follow,” recalls former Olympic cycling coach Andy Sparks. “She had the highest expectations and work ethic of anyone I have ever met.”

Catlin had a lifelong passion for horses; at age 6, she petitioned her city council to let her family keep a horse in their garage, and she formed a secret club called the Federation to Buy Horses. Later, as a talented violinist in high school, she was first chair and concertmaster with a reputation for selecting the most difficult pieces to play. She also had perfect pitch and a remarkable capacity for memorization—“she could recite pi out to 400 places,” her father says.

Catlin’s death followed two training accidents, the first in October when she broke her arm. Sutton recalls: “Sitting there with the doctor at trackside, Kelly told the doctor what was broken and what he needed to do. To my disbelief, she said, ‘Gary, so sorry, could you check the bike and the wheels please and let me know it’s all OK?’ ” On January 5, Catlin suffered a concussion when she fell during a steep descent on a training ride in Malibu, Calif.

Beset by debilitating symptoms in the wake of the January accident, Catlin attempted suicide at the end of that month, her father says. He praises the Institute for Computational and Mathematical Engineering’s efforts to support her. “During her hospitalization, she was visited multiple times by the faculty from her department,” he says. “She told me that her conversations with the faculty were more helpful and therapeutic than her conversations with psychiatry staff.”

In an essay published in February in VeloNews, Catlin discussed her life as a grad student and a professional cyclist—acknowledging that balancing the two wasn’t easy. “It’s like juggling with knives,” she wrote. “It’s just that most of them hit the floor and not me.” A few sentences later, she added: “You cannot plan for the unplannable, and—to go back to the juggling analogy—sometimes those knives will hit you.”

Catlin is survived by her father; mother, Carolyn Emory; and siblings, Colin and Christine.