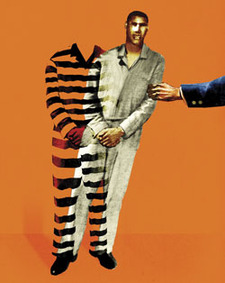 Often, a judge about to sentence a small-time criminal is stymied by sentencing guidelines that include mandatory minimum sentences and no-parole clauses. In some cases, particularly drug-related crimes, people are sent to prison for decades. Kara Dansky points to an instance when a judge had to sentence someone to 60 years for possessing a firearm and a relatively small amount of marijuana. The next case on the docket was a second-degree murderer sentenced to 20 years.

Stanford Law School will help change that, if Dansky has her way. As executive director of the Stanford Criminal Justice Center, she also wants to tackle the overrepresentation of racial minorities in the prison system. And she aims to put the work of academics studying criminal justice into the hands of policy makers, so that their decisions can be based on research.

Huddleson Professor of Law Robert Weisberg started the center in 2004 after Blakely v. Washington, a major case related to sentencing guidelines. Blakely established that any fact used to increase a defendant’s sentence has to be found by a jury or admitted to, rather than just determined by a judge. This “bizarre decision” sent shock waves through the criminal justice world, says Weisberg, JD ’79, who has been teaching criminal law classes at Stanford for 27 years. But it also gave a boost to Weisberg, who was on the verge of securing funding from the dean and provost’s offices for his new center. The center’s first conference, in June 2004, tackled The Future of American Sentencing: A National Roundtable on Blakely. It put the center on the map.

Dansky, a former public defender, was hired in 2005. Stanford is on somewhat unusual ground, she says. “Very few top-tier schools have centers like ours.” (That school across the Bay does; David Onek, JD ’99, serves as executive director for the Berkeley Center for Criminal Justice.) Instead, “top-tier” law students still tend to head for the corporate grindstone.

The plan was to enhance the Law School’s offerings in criminal law and justice and provide mentoring to students interested in the field. But the center also has begun to influence state policy makers, particularly on issues surrounding sentencing and race. Capitalizing on the prestige and neutrality of its location at a private university has been key, Weisberg says.

In January, Dansky stood beside state Senate majority leader Gloria Romero (D-Los Angeles) as Romero introduced a bill to establish a state sentencing commission. The nonpartisan commission would address the problem of guidelines that have imprisoned relatively minor offenders longer and with fewer chances for parole than others convicted of more violent crimes. Dansky, who serves on the board of the National Association of Sentencing Commissions, spoke about how the bodies have worked in some of the 26 states that have them.

Some background: the severe overcrowding in California’s prisons is due in part to a system whereby parole violations—often minor, nonviolent infractions—land people back in prison in a revolving door scenario. Also, the Three Strikes Law mandates lengthy sentences for a felon’s third offense, even if nonviolent. These issues are compounded, Dansky argues, by complicated, convoluted sentencing guidelines.

Romero’s bill may not win the governor’s signoff, but Dansky is undeterred. “We have gotten involved at a national lev- el, but we feel we really can have an impact locally,” she says.

Conferences are at the heart of the center’s activities. In April it joined with the Center for Comparative Studies in Race and Ethnicity, the Institute for Research in the Social Sciences, and the Center for the Study of Poverty and Inequality to examine why the prison population includes a disproportionate number of racial minorities and what implications that has for the country. A summit on the evolving role of victims in the criminal justice system is set for late January. It will be one of the first serious academic and theoretical examinations of the place of the victims’ rights movement in the criminal justice system, Weisberg says.

Other groups are starting to seek the center’s help. An attorney for the Center for Genetics and Society has contacted Dansky about crafting a response to a new California law that requires police to collect and forward to the FBI DNA samples from people who are arrested. Is this an invasion of privacy? Is it constitutional? Will it bring the system—flooded with samples—to a halt? Dansky and her colleagues are studying whether it would be better to introduce legislation or to file a lawsuit to prevent the law from being enforced.

The center has been hired by Fresno County to evaluate the Superior Court’s juvenile behavior health court. The program is intended to divert young people suffering from mental illness away from imprisonment when it would not threaten public safety to do so.

Carole D’Elia, project manager at the Little Hoover Commission, an independent oversight committee that aims to encourage efficiency in state government, says the center has provided space for candid conversations between academics and policy makers that doesn’t happen elsewhere. “People are opening up and having a dialogue,” D’Elia says. “That would never happen in our public hearing setting.” She also praises the work Dansky and Weisberg have done in bringing national experts to participate in the conversation about what is happening in criminal justice in California.

Science with a Conscience

Panofsky built SLAC and worked to rein in nuclear weapons.