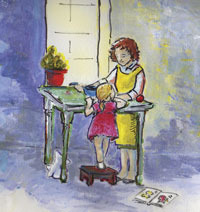 A few years back, when my oldest child was not quite 3, she stood beside me in the kitchen as I readied a raw chicken for the oven.

This could have put me off birds for good. I had never liked touching raw meat, which is clammy and bumpy, like armpit skin. I’d toss salt and pepper on the bird, and then wash immediately with plenty of soap and hot water. But I’ve been baptized in the fluids of family life: barf, snot, blood and worse. Raw chicken? Feh. I can touch it, dress it, even take out the odd little bits left inside and deliver them bare-handed to the dog’s dish without seeing my very life pass before my eyes.

I suppose this means I am adult.

This realization settled upon me recently as I stood in my kitchen, stroked by the long slants of afternoon light that pierced the window. I regarded that evening’s dinner chicken, naked and vulnerable as a baby. When I reached for the salt and the pepper, I did my best not to cry.

It wasn’t the fate of the bird that had me down, even though I still think of each one as a Dorothy pleading for one last chance. Rather, it was the news I’d just received—that a friend from high school had died.

The news wasn’t unexpected. Steve had brain cancer. An e-mail had let a group of us know the demon was back for the third time in three years.

Yet this is never the ending you expect to hear. I think it’s partly because we root so much for survivors. Our favorite stories contain people who conquer their oncogenes, who live and then conclude, “I’m alive for a reason. My life has a purpose.”

That’s the comforting thing to believe, that surviving cancer means you’re meant for something great. But if you knew Steve, you might see that notion of destiny is fragile as an eggshell.

In high school, Steve and I shared some markers for great things to come: fat acceptance letters from Stanford and Yale. I took them as proof from the universe that my life was going to be okay, blessed, even. I visited both schools and knew immediately that Stanford, with its blue skies and gentle foothills, was the place for me, the doorway to my destiny. Steve went off to Yale.

Until the cancer, we’d lost touch, even though we both majored in English and went pretty much into the same line of work—editing and writing. I don’t know why this happened, although I have to confess it has been a pattern in my life. I think I was always so eager to meet my gleaming future that I didn’t hold tight to the present.

That, anyway, was how I thought of things in high school, when Steve and I were co-editors of the school paper.

I was the cocky one, so confident in my abilities I’d draft my editorials in pen, sliding them over to him for a quick rubber stamp of approval, perhaps accompanied by the breathy sound effects of awe.

I still remember a time we sat shoulder to shoulder at the editing table, surrounded by crumpled cheeseburger wrappers. “I think you meant to write something else here,” he said, circling a word in one of my precious sentences.

“Nope,” I said. “I meant supposably. You know, something that’s supposed to be true. Supposably.”

He looked embarrassed, and only later did I figure out that it was on my behalf. “The word,” he said, “is supposedly.”

And so it is. And so it also is that someone who knew more about words and writing than I did when we were 17 is dead at 37, even though he fought his hardest, had a wife and friends who loved him, and wasn’t busy awaiting some unknown quantity of greatness owed him by the world.

I am humbled once again by the loss of him and what it means: that we can neither know, nor control, what is to come—not the size of our achievements, not the manner of our death. The best part of life is life itself, in all of its parts. So, no longer horrified by the utter rawness of a chicken carcass, I am instead grateful to touch it, to ready it for my family, and to season it simply with salt, pepper and tears. Is it greatness? I do not know. But it is enough.

MARTHA BROCKENBROUGH, ’92, lives in Seattle and writes an educational humor column for the online encyclopedia Encarta and the Cinemama column for MSN Movies.