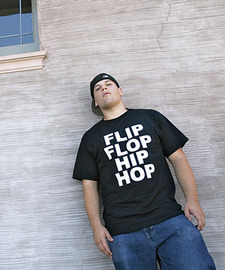 “It's been a year and a half and these people are still trapped,” raps Jeff Mendelman in “Dear Mr. Bush,” a rebuke of the President's handling of the post-Katrina crisis in New Orleans. “You have the nerve to call it Katrina aftermath? You did half the math. New Orleans is not a problem of the past.”

Mendelman's debut album, KNOWLA, was inspired by a visit to New Orleans's Lower Ninth Ward in January 2007. “If I haven't been there, you won't hear me rap about it,” says the human biology major, who also rhymed about homelessness in New York after a stay in the city.

True to his convictions, Mendelman has donated all proceeds from album sales—$500 so far—to Katrina victims. He also leads Stanford's chapter of the Hip Hop Congress, a national movement to harness rap music for social good. “The last age of hip hop has been defined by artists raising the bar of gangsta rap, but I want to push for socially relevant music.”