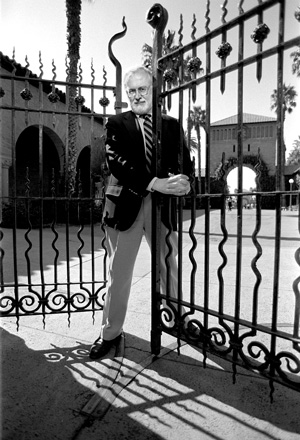 Known for his wit, erudition and deep compassion for his students, Stanford creative writing professor John L’Heureux elevated empathetic criticism of their work to the level of life lessons and enduring friendships.

John Clarke L’Heureux, who taught at Georgetown, Tufts and Harvard before arriving at Stanford in 1973, was the Lane Professor of Humanities, Emeritus, and longtime director of the Wallace Stegner Creative Writing Fellowship program. He died on April 22 at his Palo Alto home at the age of 84.

L’Heureux had endured progressive incapacitation from Parkinson’s disease for many years and—as he disclosed in an eloquent account published in the New Yorker one week after he died—chose to end his life under California’s death-with-dignity law.

The account was published alongside his new short story, “The Escape,” which L’Heureux called “a wry, disturbing look” at Parkinson’s. It was one of several of his stories to appear in the New Yorker; his work also ran in the Atlantic, Esquire and Harper’s. A book of new and selected stories, The Heart Is a Full-Wild Beast, will be published in December.

The author of 20 books of fiction and poetry, L’Heureux described his creative drive in his farewell essay: “The writer’s true reward is not money or fame but the writing process itself—making a good thing that did not exist before.”

Twice awarded the School of Humanities and Sciences Dean’s Award for Excellence in Teaching, L’Heureux was a professor at Stanford for 36 years, during which he mentored a legion of students who attested to the alchemical process by which he made them better writers.

The late Harriet Doerr, ’31—who left Stanford to marry, returned to complete her degree in 1977 and won a National Book Award seven years later—said in a 1996 interview: “John never helped write one single word, but helped with his criticism tremendously. It’s like opening a slit of light in a dark place you hadn’t seen.”

Novelist and short story writer David Vann, ’90, a former Stegner fellow, praised L’Heureux’s “wry humor, tough criticism, generous love.” Now a professor at the University of Warwick in the U.K., Vann added that L’Heureux “was a father to me and gave me permission to be a writer. Without him, what I value most in my life now would not be. He made me.”

Tobias Wolff, MA ’78, another former Stegner fellow and Stanford’s Ward W. and Priscilla B. Woods Professor, Emeritus, said of L’Heureux: “He taught me how to think objectively, to read over my work as though someone else had written it.”

L’Heureux’s 1997 satire The Handmaid of Desire made gentle fun of the English department at a California university, populated by self-absorbed, scheming professors and clueless deans. “He loved the way people on campus talked about the book,” said his friend Carmelo Cogliandro, the owner of Stanford Hair, who trimmed L’Heureux’s beard and slowly balding head for 40 years. “We laughed about it together—he had a wonderful, subtle sense of humor.”

A former Jesuit priest, L’Heureux ends his New Yorker essay by citing Catholicism’s service for the dead, which asks God to grant eternal rest. “There is little fuss about Heaven or its glories,” he writes. “No fuss at all about Hell. Just eternal rest. And, after all the words squandered on right and wrong, failure and desire, love and the tragic failure to love, I am ready for eternal rest. Eternal rest. Even the sound is soothing.”

He is survived by Joan Polston L’Heureux, his wife of almost 50 years.