Not Your Mother's Beach Book 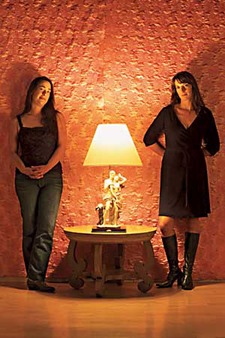 “Sometimes our language can be so foul,” Belleville says, laughing heartily. “We’ll walk ourselves through a scene and you simply think of it as your book and you’re just trying to write it. But we have head-turning, eye-popping conversations when we’re in restaurants.”

The two Bay Area residents speak on the phone an hour or more daily, exchange e-mails frequently, and get together at least once a month. Their rapid-fire conversations jump from the effective use of dream sequences and flashbacks, to size, structure and other details about intimate areas of human anatomy.

“You want it to be more than just a play-by-play of body parts and what’s going on where. You want to be sure you’re inside the characters’ heads; what she’s thinking and what he’s thinking,” explains Worthington. “And yet you also have to pay attention to ‘What’s that leg doing on that shoulder?’ It’s exhausting.”

“It freed me up as a writer to be able to use the real words,” Belleville says. She publishes as Bella Andre (Take Me, 2005; Tempt Me, Taste Me, Touch Me, 2007; and Red Hot Reunion, 2007, Pocket Books). Worthington’s pseudonym is Jami Alden (Delicious, 2006, and A Taste of Honey, forthcoming in April, Kensington Books).

And men? “Men are reading these, too,” Sares adds. “Not in huge numbers, but once they find out what’s going on between those book covers, yes they are. Some couples read them aloud.”

There’s more to romance books than most people assume, says Abby Zidle, ’91. She began a PhD on romance novels, but found she was much more interested in reading the books than in writing the dissertation. “I went to good schools, I was a good little liberal, and I felt I was a feminist, so I was wondering what I was getting out of these books.”

The answer is affirmation and empowerment, says Zidle, now an editor at Harlequin Books. Traditional romance novels reassure women they can demand emotional satisfaction and find happiness as a wife and mother. With the proliferation of sensual images in all types of media, it’s a natural evolution to more explicit and diverse stories.

“This is the logical extension of what romance novels have been doing for years, which is modeling behavior for women and saying, ‘Is this what you want? Is this what you need? Then go for it,’” Zidle says. “The publishing industry is in some ways really nonjudgmental in that if enough people will buy it, we’ll print it.”

Despite their frank anatomy discussions, Worthington and Belleville are somewhat conservative in their genre. They prefer one-woman-one-man plot lines. “To me, romance is the important part,” Worthington says. “They may be having hot monkey sex all over the place, but I still want to know that they’re falling in love. I think we write really romantic stories that happen to have a lot of sex in them.”

They met as freshmen at Stanford. “We just clicked,” Belleville recalls. “We were the only two in our 100-person dorm who didn’t rush a sorority or a fraternity. We had the same crude sense of humor; we liked the same music.”

And they both loved romance novels. Being roomies in their sophomore year seemed like a good idea, but it wasn’t.

“We had the girl break-up,” Belleville says. “As we like to put it, we were both selfish you-know-whats.”

After graduation, they lost touch. Worthington worked in marketing and dabbled with a historical romance novel. When layoffs hit, unemployment fueled her writing efforts. Belleville spent 10 years as a pop-folk musician, then joined a writing group and published a nonfiction book about the music industry. One day in 2002, on a whim, Worthington used her cell phone to play an on-air radio game. Belleville happened to be surfing the dial and tuned in while Worthington was talking.

“She didn’t say her name, but I knew the voice,” Belleville recalls. “She made a joke and I said, ‘That’s Jami.’ I knew I needed to track her down.” Belleville found Worthington’s phone number on the Internet. “I left the gooniest message on her answering machine.”

“I’m sure my husband will tell you that I have a fairly filthy mouth and Isometimes say things that shouldn’t be said in mixed company. So it’s nice to have an outlet,” Worthington says happily. She loves creating male characters who are just average guys.

“Guys are not thinking about ‘her soft flesh.’ They’re thinking in more crude terms,” she explains. “It’s nice to not have to make a guy think, ‘Oh my darling,’ because nothing pulls me out of a story faster than that. I grew up with guys. I’m married to a guy. My husband doesn’t think deep, poetic thoughts about my beauty, but he’ll tell me I’m hot.”

Belleville also appreciates the frankness of their genre. “I’ve been able to tap into a creative part of my brain that happens to be tied into sexuality,” Belleville says. “I feel this is a real feminist thing that I’m doing, embracing my body. My books start off with a bang. If you can make it through chapter two, then you’re not fainthearted.”

Both writers are mothers. Belleville has a 2-year-old son and a newborn daughter. Worthington has a 1-year-old boy. They commiserate on managing multiple life roles. “It can be a little weird,” Belleville says, “like when I’m changing my baby’s diaper and thinking about the choreography of sex scenes.”

Wherever they are and whatever they’re doing, Belleville and Worthington pursue their literary craft in style. “Our preferred method of brainstorming ideas for a new book is to go to the Stanford mall and walk around,” Belleville says. “Being at the mall sort of frees up our creative juices. Walking frees up your mind. Shopping obviously does the same for us, too.”

PATRICIA LYNN HENLEY is a writer in Sonoma, Calif.