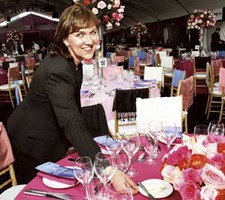 The sound of 1,552 wine glasses clinking is a magical moment. They reverberate, like bells, even in a 32,000-square-foot tent on blustery Treasure Island. Three nights this week in late August, Lee Gregory has listened as a total of 6,000 Japanese saleswomen toast the company that has rewarded them with a trip to California. The peal makes her smile every time.

Gregory, ’83, has engineered these banquets—complete with circus acts, fireworks and souvenirs—for the year’s top salespeople at Miki Corp. The Japanese firm sells health products through direct sales, like Avon or Mary Kay. But instead of pink Cadillacs, Miki’s top sellers get wined and dined around the Bay Area. The company made its name with prune extract, so the group goes north to Yuba City to visit the plum trees. The women, ages 20 to 82, wear sequined gowns and a few kimonos when 40 buses bring them to the finale on Treasure Island.

One of the zillions of details Gregory has anticipated is turned ankles as thousands of high heels cross the lawn to access the island’s irresistible view of San Francisco. She had walkways installed from the tent’s French doors to the street edging the bay. Directional signs to the restrooms are printed in kanji.

During the final setup before the guests arrive, Gregory solves a problem of low water flow in one of the portable restrooms. She has a chair moved so the Miki CEO ’s wife can see the singing waiters. She gives a last-minute pep talk to the servers. Service is what people remember, she tells them, along with a reminder about which small spoon goes with dessert and which with coffee.

In honor of Miki’s famous extract, the four-course dinner includes an appetizer of prosciutto-wrapped prunes. The appetizers are finger foods, but the guests don’t mill around taking samples from wandering waiters. All 1,552 are seated. Then appetizers are served to the women’s plates. As with the wine, in Japanese custom, everyone begins together.

Tables are laid with the first of the 28 pieces per guest of china, cutlery and such. The centerpieces are gorgeous roses from Colombia, assembled in a tent of their own, and disassembled at the end of each evening so that each guest receives a bouquet as she leaves the tent. On each chair is draped a shawl imprinted: “Miki Group Dinner Party Treasure Island 2006.” The women will wrap up in these when they watch the fireworks.

As director of sales and marketing for McCall Associates, la crème de la crème of San Francisco’s caterers, Gregory oversees about such 100 events a year. The only woman among McCall’s nine partners, she did about $4 million in sales last year. Fall, always McCall’s busiest season, held the opening of the San Francisco Bloomingdale’s, the San Francisco Symphony gala opening, the Oracle OpenWorld conference and several Stanford Reunion Homecoming events.

Gregory came to catering with a mechanical engineering degree, after a decade as a systems engineer at IBM. She helped plan her Stanford class’s 10th reunion, and afterward McCall Associates, which expects about $18 million in sales this year, offered her a top job at the firm. “It was trial by fire and somewhat painful at first,” Gregory says.

But her abilities translated. “My job at IBM was to understand the customers’ business needs, their computer needs, what they wanted to achieve. Those skills are pretty transferable. It’s about thinking analytically and logically, but also conceptual blockbusting. My creative process just went in a different direction.”

The outcomes were more satisfying as well. “I really like to exceed people’s expectations. At IBM, the best I could do was to give them what they paid for. They weren’t calling and saying, ‘Thank you so much; I love what you’ve done with my computer.’”

By contrast, her catering clients are effusive.

“Working with Lee Gregory is always effortless,’’ says Barbro Osher in an e-mail from Sweden. The consul general of Sweden and chairman of the Bernard Osher Foundation, Osher has worked often with Gregory. (One notable party was the Nobel Prize centennial for 350 guests at San Francisco City Hall in October 2001.) “Lee creates fabulous events with very little guidance.”

Gregory came to Stanford from Wilmington, Del., headquarters of the DuPont chemical company, where “everything is chemical engineering.” When she was in high school, she helped plan the party for her mother’s second marriage. She loved it. Later, when her family had the what-do-you-want-to-do-with-your-life talk, she said: party planning.

“Uh, other than that,” replied her stepfather, a DuPont executive.

“He thought engineering would prepare me for everything,” Gregory says. “He wasn’t wrong.”

At Stanford, she liked taking classes with James L. Adams, MS ’59, PhD ’62, author of Conceptual Blockbusting. It was creativity that appealed. “My real interest was in art and art history. I tried to take one course a quarter. [Professor] Wanda Corn changed the way I looked at art,’’ says Gregory, now a voracious art collector.

Besides art and engineering, Gregory says, “a passion for good works was born for me at Stanford.” She worked on the Heritage Fund, raising money for scholarships. She currently volunteers with the San Francisco Art Institute, the symphony, San Francisco Ballet, City College of San Francisco and the San Francisco Sports Council.

Gregory worked 14-hour days to arrange the Miki dinners, but she often works at least 12. Before getting to her desk at 9 a.m., she works out at least an hour. A person who eats out three meals a day—to troll for new ideas—must keep herself in fighting trim.

Her office is in a Mission District building that from the parking at its loading dock, looks like a boring old warehouse. Inside, it appears to be a café, a bar and a lounge. People have wandered in and asked to see a menu.

Food for large events is prepped at McCall’s nearby kitchen facility. Baking, boiling and barbecuing are done on-site, where a crew has brought hot boxes, ovens and stoves. Each Miki dinner party was packed into four trucks. Banquets are broken into mini-dining rooms, each with a captain and two servers. Each tray of plates serves an entire table. At Treasure Island, the 1,552 get their chilled Maine lobsters almost simultaneously. “We can serve the whole room in eight minutes, whatever the size,” Gregory says.

Get it in, serve it and get it out, and make sure the client can feel like a guest at the party—that’s the job. And the caterer just cannot forget things. Throw a party on an island, and “you can’t run to the closet and get 300 wineglasses.” Of course, Gregory notes, “Things happen.” Trucks break down or get stalled by traffic. (“Hopefully the guests are stuck in the same traffic jam.”) The party tent blows off the aircraft carrier USS Hornet. (It happened early in the day, and there was time to recover.) Two women get into a fistfight at the San Francisco Gift Center and a man sets a garbage can on fire in the restroom. Theft is an issue. “Ladies in fancy dresses walk out with everything.”

Proms present fewer problems. “The kids are better behaved than a bunch of drunk adults.”

The Japanese women have fun and don’t break anything. Their pleasure in the evening is not lost in translation, but communicated to the caterer. “They love love love to high-five,” says Gregory, who also gets pulled into their conga line to the beat of “Hot Hot Hot.”

SHEILA HIMMEL is a former food writer for the San Jose Mercury News.

The losses piled up and the injuries mounted. It would have been easy for Stanford s football players to give up. Senior Josiah Vinson explains why they didn t.