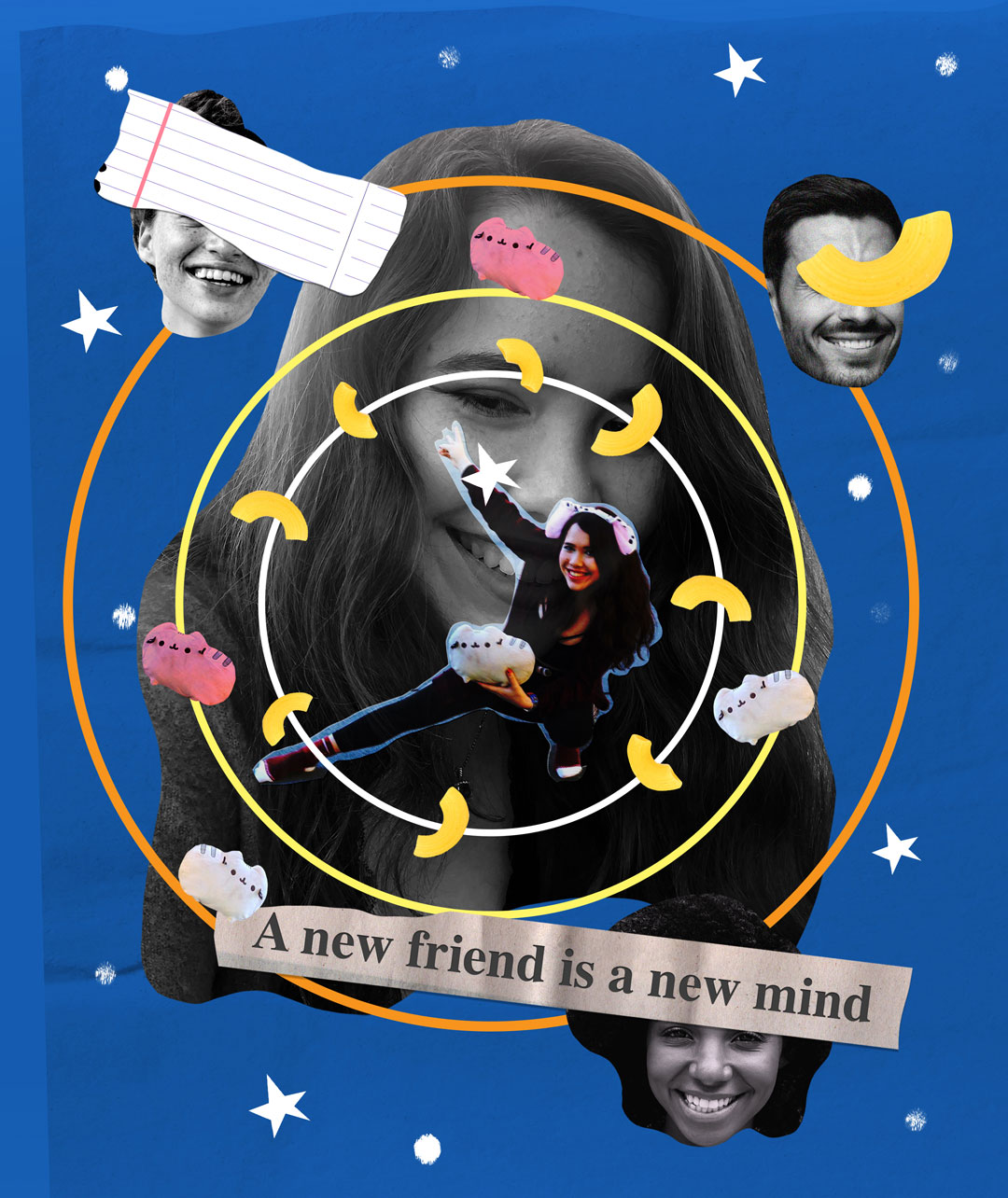 “I think you freaked him out,” my roommate said, after I tried and failed to entice my boyfriend’s summer roommate, whom I’ll call Benny, over for mac and cheese.

In his defense, the sight of me sporting baby-blue oven mitts and proffering a pot of freshly broiled mac and cheese was probably, as the kids say, “a lot.”

“I was just trying to be friendly!” I said. “This guy just moved in with some rando with an existing social group. I want him to feel welcome.” My roommate, Liz; aforementioned rando, Preston; and I sat cross-legged on my floor, picking at the remaining pasta.

It’s really not. Admittedly, I radiate heavy mom vibes: the kind of intensely dorky, vaguely maternal energy that says, “Yes, I do have this cardigan in two other colors.” I use the phrase “hip with the kids” unironically. I cackle maniacally when I get a good parking spot. When I go to parties, I carry a cross-body purse filled with granola bars, shot glasses (for responsible drink measuring) and other people’s phones.

I don’t think I’ve ever been naturally gifted at anything other than committing my entire being to an often questionable goal. Making friends is no exception. As an extroverted middle schooler with an analytical, sometimes misdirected bent, I figured I could offset my natural awkwardness through effort and research. So I wikiHow’d friend-making strategies and then wrote elaborate protocols for myself. (Maybe not that elaborate: One of them was “run toward crowds instead of away from them.”) In high school, I wrote “An Algorithmic Approach to School Dances” as a joke and an actual document of social algorithms not as a joke. I got heavily into the Myers-Briggs Type Indicator because the idea that there was some code to humans that I could crack if I studied hard enough seemed utopic.

“Thanks, guys,” I said. After a few weeks of my enthusiastically saying “hi” when I saw Benny in the halls, I had simmered down to giving him a wide berth when I walked through his room. “I mean, I guess in his position, I would also find me annoying.”

A new friend is a new mind, a new universe of perspectives. So why wouldn’t I make strides to get to know a stranger who’s been cast into my orbit?

“Fine, you’re right, I wouldn’t,” I said. “I would find the attention flattering and charming.” I sighed. “Alas.”

“You just come on kind of strong,” Liz said. “It took me a while to get used to.”

This concern is not new to me. Since high school, I’ve maintained a “friend hit list,” a dynamic set of interesting people I aggressively pursue as friends. To illustrate, I went up to someone in my dorm and said something like: “I’ve thought you seemed cool for a while now—would you like to get lunch on Thursday?” And now we’re friends! Bam, what a rush! I wished something into being, and then I made it happen. We are as gods.

I’ve done this enough times to understand that this level of bluntness isn’t everyone’s jam, and I’ve read enough personal essays to know that the lesson I’m supposed to take away here is that, optimization be damned, I can’t be friends with everybody. But, like, where’s the fun in that?

“I’ve been Benny in this situation before,” Preston said. “I think he just genuinely doesn’t get why you’d want to be friends with him.”

I get that I don’t have to do this anymore. I am no longer the socially stumbling middle schooler grasping for connection—I have plenty of friends, fantastic ones. Nor do I need Benny’s approval to validate my social value; my self-conception isn’t damaged by his ambivalence. But for every person I annoy by pushing too hard, there’s someone (like Liz and Preston and countless others) I wouldn’t have gotten to know without the effort. People don’t default toward connection. We are asteroids in a void, glancing off each other and spinning out into oblivion, and it takes concerted effort to overcome our human predilections toward isolation and self-involvement. But a new friend is a new mind, a new universe of perspectives. So why wouldn’t I make strides to get to know a stranger who’s been cast into my orbit? The risk is embarrassment, but the reward is an entire world.

“Honestly,” Liz said to Preston and me later that night, “I didn’t think I was going to be friends with either of you. You’re both weird stereotypes.”

“Yeah.” She turned to Preston. “I thought you were, like, a nerd with no social skills.” She pivoted to me. “And you’re the most emotional person I’ve ever met.” She paused and looked sheepishly at the ground. “But you grew on me.”

Hear that, Benny? I’m coming for you.

Product design major Mei-Lan Steimle, ’21, is a friend to some, a stranger to herself and the sworn enemy of potted plants everywhere. Email her at stanford.magazine@stanford.edu.

Putting Ethics at the Heart of Innovation

Stanford centers the humanistic and ethical considerations of new technology.

It’s Not Easy Being Green

An editor’s epic quest results in a documenTree.