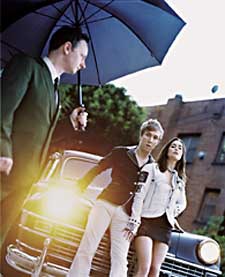 Clad in a ’70s-era red jumpsuit, Lisa Light is hard at work at a café in San Francisco’s Mission district, typing out song lyrics on an iBook. “Everything is coming out sort of bluesy tonight,” she says, almost apologetically. “My cat died while we were on tour.”

Light is the lead singer of The Lovemakers, an Oakland-based band that is attracting notice outside the East Bay warehouse-club circuit. The band—known for memorable live performances that feature makeout sessions onstage and vibrators used as guitar picks—has a fast-paced, synth-pop sound that Light describes as Led Zeppelin covering Prince. “When we play music, it’s sort of like anger and annoyance mixed with some sort of inescapable passion that’s become kind of a problem,” she told an interviewer in the San Francisco Bay Guardian. That’s a good way to describe not only the music but also the band’s genesis.

An Ohio native, Light fell in love with dolphins at age 6 and pursued marine biology single-mindedly. But after graduation, she found lab work at UC-Berkeley and San Francisco State uninspiring. Eager for a change of pace, Light worked briefly as a circus violinist before enrolling in San Francisco State’s graduate program in classical music. She also joined a band called Applesaucer, where she met guitarist Scott Blonde.

That was when her inescapable passion became kind of a problem. Tossed out of Applesaucer for dating each other, Light and Blonde started The Lovemakers with keyboardist Jason Proctor in 2002. With buzz spreading from their live shows, they were signed to hip label Cherrytree in 2004. Last spring they headed to Los Angeles to record their first major album, “Times of Romance”—just as Light and Blonde’s relationship collapsed. There was no viable option but to record while living together in a sublet studio apartment. Light found the experience excruciating: “We’d written the sad songs as jokes, and then they came true.”

The drama of their relationship continues to heighten the drama of their shows, and fans certainly seem to be responding to the music—The Lovemakers’ first single, “Prepare for the Fight,” rose to No. 17 on Billboard’s dance chart.

Light hopes to make a lifelong career in music, although she’s well aware of the expiration date on most pop groups. Asked if the album reflects the emotional trauma of the recording process, she says wryly, “I have no idea. It’s a pop record, so how can you tell?”

Is It Healthy When Anorexics Network?