Which sex is worse for the environment? 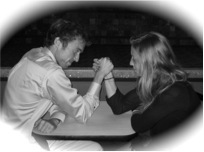 I was in need of some new first-date conversation topics and I became curious over this question: from birth to age—oh I don't know—17, is a boy or a girl worse for the environment?  What are the differences between male and female impacts on the environment?

“Red Rover, Red Rover send EMELIA on over.” Jaws clenched, knuckles white, the string of boys faces the string of girls. Pride is at stake. The winners will have lunch-hour bragging rights; the losers will wallow in shame as the subpar sex. Even the least athletic kids rise to the challenge. If a similar battle of the sexes is what it takes to inspire sustainable action on the environment, then bring it on.

Each sex can learn from the other, and the conversation could go on for a long, long time. Just to get it started, I will compare the environmental impacts of men and women in six areas, and I'll focus on the teenage years and beyond. Before then, kids don't have much control over their environmental impact and—assuming a 10-year-old isn't yet wearing makeup or running up the credit cards for clothes—boys and girls likely have about the same impact on the environment until they reach the teen years.

From an early age, many girls are insatiable when it comes to fashion—and the modern textile industry makes it easy to go overboard. Clothing is relatively cheap to buy, and often designed to last for just a season or a year. But the environmental cost can be high. What goes into a single pair of jeans? Growing 1.5 pounds of cotton requires 1,500 gallons of water; over a half pound of fertilizer and pesticides; toxic dyes; numerous rinsing cycles to get that perfectly “worn” look; not to mention brass zippers at the expense of acid mine drainage and air pollution. Women buy nearly twice as many high-priced jeans as men. They certainly leave their fashion footprint.

But while women may buy more clothes than men, they also recycle more. Polls suggest that women value recycling more than men and are considerably more likely to recycle. Everyone agrees that recycling saves energy, reduces raw material extraction and counteracts climate change. For example, recycled aluminum requires only 5 percent of the energy used to make the original product and generates 13 times fewer carbon dioxide emissions.

If recycling is socially correct behavior, so is looking good, especially for women. The average woman spends more than $1,000 a year on cosmetics. People often forget to recycle shampoo or lotion containers, tissue boxes and make-up packaging. But the environmental impact of cosmetics extends beyond packaging waste. Many of the chemicals in moisturizers and sunscreens are listed as potentially carcinogenic or as potentially interfering with hormonal functions. That’s terrible for test animals, and could be harmful to users as well. When washed down the drain, those chemicals can end up in our waterways. Many moisturizers are petroleum-based, putting additional demand on non-renewable fossil fuels. Find more on environmental and health impacts of personal care products in a previous SAGE response.

Women feel considerably more “green guilt” than men. Perhaps this is not surprising given that women are more likely than men to manage the household finances, making them more aware of the economic logic behind living sustainably. In spite of the scientific consensus on global warming, more men are in denial than women. For example, women are more likely to take voluntary actions such as installing home insulation, replacing appliances, and avoiding gas-guzzling cars. But given the extensive consequences of global warming, we are all in hot water.

Men are more frugal concerning showers and bottled water—but not by much. Contrary to common perception, women only spend 39 seconds longer in the shower on average than men. But seconds add up: for all the women over age 14 in the United States, this excess comes to 491 million extra liters of water per shower. (You can read SAGE answers about water use for bathing here, and total home water use here.) Water heating is the third largest energy expense in a typical home and a large contributor to carbon dioxide emissions. Similarly, making and shipping plastic water bottles uses a lot of oil. Americans consume enough bottled water every 27 hours to form a circle around the equator with stacked bottles. Women add disproportionately to this girth.

Some gals can put up quite the fight in an eating contest versus guys. In the end, though, most guys can and need to consume more. Plus, females tend to make more sustainable food choices. Men are twice as likely to eat meat, according to a national poll by Vegetarian Resource Group. A vegetarian lifestyle conserves soil, water, energy, and the atmosphere. For example, the Worldwatch Institute estimates that livestock and their byproducts account for 51 percent of global greenhouse gas emissions. Women also care more about buying local food. By choosing local products, women reduce the many thousands of miles of fossil fuel-powered transport required to ship produce from around the world. Read more on the impact of eating locally in this previous SAGE column.

Back on that elementary school playground, the girls win one day, the boys another. Whichever is the more sustainable sex, it behooves us all to evaluate our life choices carefully in order to reduce our collective environmental footprint. After all, as Stanford professor of science education Nicole Ardoin points out, “Perhaps environmental impact has less to do with gender and more to do with the roles we play in life.”

Find out more about how each sex has something to learn from the other in the Nitty-gritty answer.

Leaving Goldman: An Analysis of the Resignation Heard 'Round the World