Singer-songwriter from Hong Kong goes for global and local.

Emma Wong, who was born and raised in Hong Kong, grew up in a small apartment in a 21-story building with her mom and dad. Her grandparents lived in the apartment across the hall, and beside them were hundreds more neighbors from around the world. Collectively, they spoke English, Spanish, French and many different varieties of Chinese. Like the city itself, the building was a mélange of cultures, cooking aromas and musical sounds.

“The tiny little apartments get you really close,” says Wong, a rising junior. “It was a great place to grow up. There was a lot of focus on being a global citizen and what was going on around the world. I loved that.”

Wong, whose mom is Canadian and whose dad is from Hong Kong, came to Stanford with a mission to develop her abilities to serve others while creating new bonds. She uses her talents as a singer, an instrumentalist and a songwriter (these days, on ukulele, guitar and guitalele) to bring disparate communities together—once by writing a song based on her interviews with Syrian refugees in Canada, and other times by busking in downtown Palo Alto to raise money for charities.

“Music can be a call to action.” 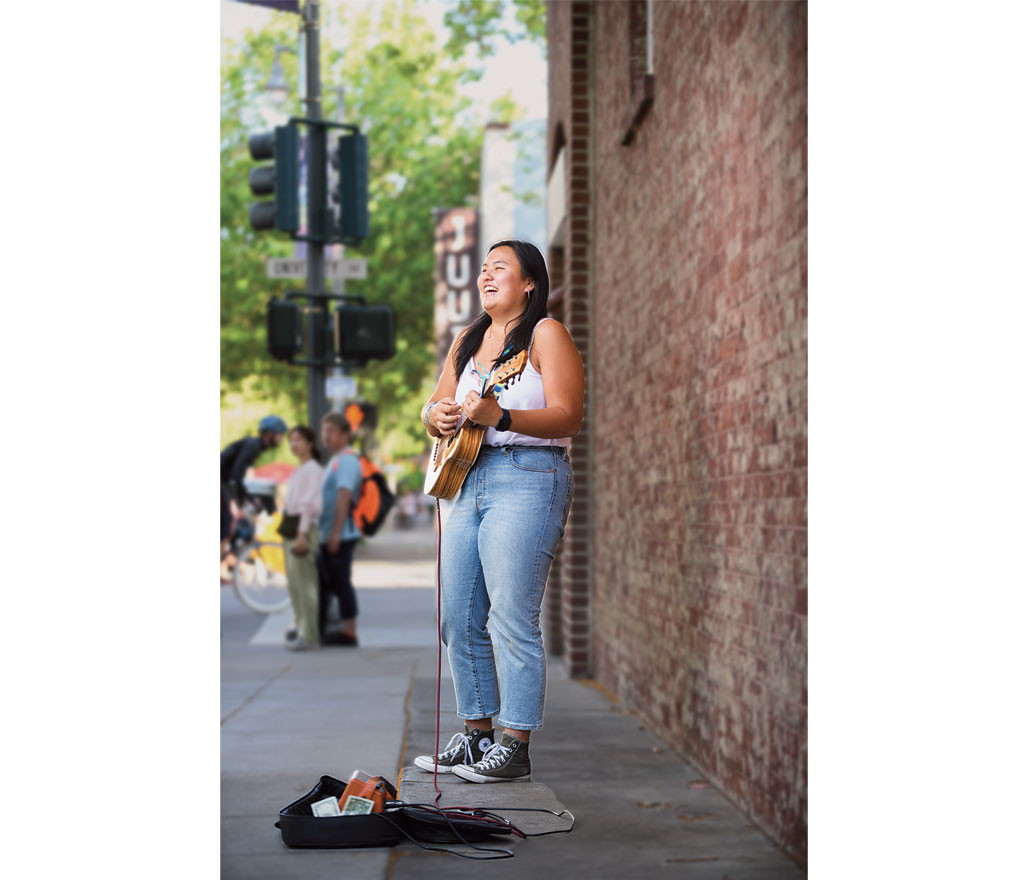 “There are a lot of things I miss about Hong Kong: the food, the smells. Hong Kong is very fast-paced. Here, it’s so calm. It’s all sunshine. It’s very different, but Stanford has definitely become home as well.

“For as long as I could remember, I wanted to learn the guitar. It was also because my dad wanted to learn so badly. When I turned 12, for my birthday I got a guitar and started my singer-songwriter journey. I got lessons, and my dad learned beside me. I have lots of memories of Sundays at home, us just singing and jamming out.

“In a ninth-grade music class, we studied protest music, and I wrote a song about the Manchester Arena bombing at the Ariana Grande concert, about how sad it is that it takes tragedy to get people to come together. I’m in a music class right now called Stories and Music of Refugees. We are learning about the genocide in Cambodia and writing music about refugees. I’m at a point right now where a lot of the projects I was working on in high school are coming full circle.

“Around February last year, I went downtown and the street was closed off for outdoor dining. There was a musician singing and engaging the crowd. After one of her songs, I went up to her and said, ‘You just sound amazing.’ She inspired me to start doing it on my own. I’ve become a lot closer to other street musicians now. It’s a great community. There’s also a small homeless population in Palo Alto, and they’ll come and dance while I’m singing.

“It was my dream in high school to be a refugee lawyer, but coming to Stanford gave me a different perspective. I’ve really found a passion for biology and technology.

“My grandmother broke her leg when I was, like, 10. It definitely changed her quality of life. She couldn’t be involved in the same things she used to do, like tai chi or going out and about. She was really social. The idea gets bounced around a lot at Stanford about making sure that people’s lives are healthy for as long as possible. I want to work in preventive health care so that people can live as many years as possible being healthy and happy.”

A doctoral student and teacher on the value of exchange.