Life, the Metaverse, and Everything

ME 2.0: Baszucki’s avatar (left), known as builderman in Roblox’s early years, would welcome new players to the platform. Images: Roblox

The online game Adopt Me! revolves around raising digital pets. It begins by dropping players into a cheerful fairy-tale world, the kind of town where the Keebler Elves might be your neighbor. Pets start as mysterious eggs that can hatch at any moment, revealing cute, bug-eyed animals, and checks for $25 regularly appear out of thin air. The gameplay in Adopt Me! is freeform, and as players explore and make friends with other players, they learn that the virtual currency they earn can be used to unlock things like fairy wings for their avatars, polka-dot wallpaper for their homes, and, most important, food and other necessities to sustain their animals.

A contemporary to mainstream franchises such as Animal Crossing and Pokémon, Adopt Me! has been played more than 29 billion times, making it one of the most popular video games in the world. But it’s not the creation of a major corporation like Nintendo. It was designed by an indie company on Roblox, an online gaming platform that has exploded in popularity over the past few years.

Co-founded by David Baszucki, ’85, and the late Erik Cassel in 2004, Roblox has two attributes that make it stand out from its peers: Each of the millions of games in its catalog was created by the site’s users themselves using the company’s proprietary software, Roblox Studio. And almost half of the roughly 54 million people who log on to the platform daily are under the age of 13. In 2020, the company estimated that 75 percent of children aged 9 to 12 in the United States had created a Roblox account.

“What was, I think, unique about Roblox is we wanted this to be highly user-generated,” says Baszucki, the company’s CEO. “We wanted it to be very easy to create.”

Today, Roblox is poised at the edge of the gaming world, peering into an undefined future in a place called the metaverse. Therein lies the prospect of a new era of creation—not just of individual games for kids but of an immersive virtual universe, where children and adults alike might socialize, work, and shop. Roblox is already playing a role in its establishment by offering the tools, the platform, and the virtual currency for builders to make what they please.

“It’s almost like Alexander Graham Bell just did that first phone call five years ago,” Baszucki says. “We’re just starting to lay the telephone wires. We’re starting to think that, ultimately, everyone around the world will be using the telephone and it will be a utility. We’ll use it for everything.”

As a teenager in Minnesota, Baszucki spent hours programming on an Apple II, one of the first computing devices mass-produced for consumers. He continued pursuing the hobby at Stanford, where he studied electrical engineering. In order to spend time in front of a computer, he had to rent a terminal through the university’s Low-Overhead Time Sharing project, aka LOTS. Aspects of programming were still very analog. “You would debug your [code] with a printout, which seems absolutely crazy,” Baszucki says.

Four years after graduation, Baszucki and his brother, Greg, created Interactive Physics, a simulated physics lab for students. In the years that followed, Baszucki noticed that young people were not only doing their homework with his software but also creating their own simulations with it. He became familiar with the idea of the metaverse from reading Neal Stephenson’s 1992 science-fiction novel Snow Crash, and he soon realized that an open, virtual system used by millions of people would be more powerful than static software sold in a box.

In 2003, Baszucki and Cassel, who’d led engineering at Interactive Physics, rented an office in Menlo Park and began working on an early prototype of what would become Roblox. When Roblox Studio launched on Windows in September 2006, Baszucki assumed the username “builderman.” For several years, builder­man automatically became friends with new players and sent a message welcoming them to the platform. (Baszucki now plays under the handle david.baszucki.)

In Roblox Studio, developers can custom design almost every aspect of their games, and each experience is unique. What unites them is a shared economy based on Robux, the platform’s native currency. (One Robux equals roughly 1 cent.) Another constant is the particular avatar a player uses, which follows them across Roblox games and can be personalized.

Roblox was one of several gaming companies that bet big on virtual worlds in the early aughts. Similar offerings included Second Life, Minecraft, and The Sims, all of which allow players to build and explore their own digital environments. Second Life and The Sims target adults and older teens. Minecraft was built for children, but is a “sandbox” video game rather than a platform. “I think [Roblox is] kind of an outlier as a thing in the world,” says Ian Bogost, a game designer, author, and computer science professor at Washington University in St. Louis.

Federal privacy regulations protect internet users under the age of 13, and many social media sites explicitly ban children because of the potential liabilities associated with collecting data from them. But Baszucki and Cassel got their start developing computer programs for classrooms. Creating a digital space for young people was a natural extension of their efforts.

In 2013, just as Roblox was beginning to gain steam, Cassel succumbed to cancer. Baszucki says the choices Cassel made after his diagnosis left a profound impression. “He really didn’t change anything in his life,” Baszucki recalls. “He didn’t go to the beach. He didn’t go to climb Mount Everest. He just kept working on Roblox, which was, I thought, a good lesson around trying to balance your life and live a life you would live no matter what.” After Cassel’s death, Baszucki set about the task of ensuring that Roblox grew into the company he and Cassel had worked so hard to create.

Baszucki soon had to face some of Roblox’s biggest public controversies. As the platform gained popularity, critics began expressing concerns that some Roblox developers were using predatory tactics to hook kids and ensure that they spent a steady stream of their parents’ money, sometimes without their knowledge. One 11-year-old reportedly racked up $3,000 worth of in-app purchases in less than a week.

On the other end of the Roblox economy are child developers, who dream about getting rich from building games. Roblox takes a large share of any income that developers earn from their creations and the rest is paid in virtual currency, which can’t be converted into American dollars until a player has amassed at least 50,000 Robux. In a viral video, the YouTube channel People Make Games argued that Roblox profits from child labor. 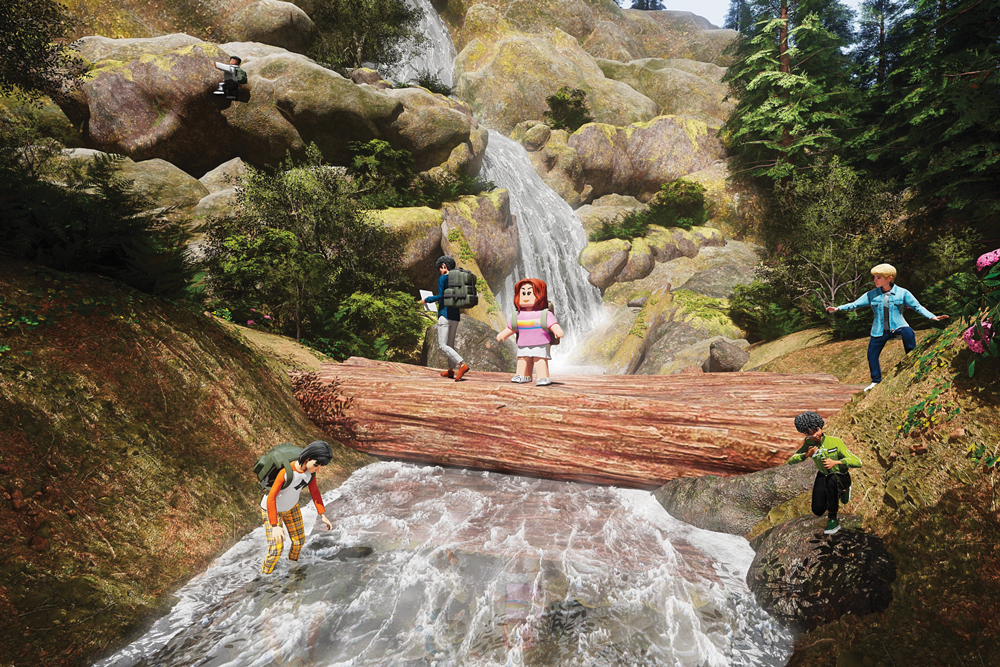 Baszucki stresses that Roblox is primarily about helping kids learn computer and programming skills while they socialize with their friends. They can make money on the platform, but that’s more of a fringe benefit. “We have to be very thoughtful, especially with younger creators, as far as how we talk about this,” Baszucki says. He compares building games on Roblox to age-appropriate jobs of the past. “Maybe 30 years ago, these were paper routes and mowing lawns.”

Allowing users to develop their own games presented another problem: Some of the stuff people post is vile. Roblox users began building a wide range of inappropriate games, including Nazi role-playing stories, simulated strip clubs, and re-creations of mass shootings. “I did see a lot of offensive content and scams,” says Esther Tok, ’25, who started playing games on Roblox when she was in middle school. She adds, though, that it’s often hard to tell how serious people’s intentions may be. “I think a lot of the time it’s just a bunch of kids trying to be edgy,” Tok says.

Because its user base is so young, the company took a stringent approach to content moderation, banning depictions of real-world politicians, any kind of profanity, and all forms of romance, including hand-holding. “We very much over-indexed on civility versus the openness of the platform,” Baszucki says. Today, Common Sense Media rates Roblox as suitable for kids over 13 due to “continuing challenges with problematic content,” although it’s considered safe for younger users (kids themselves say 9 and up) with account restrictions enabled and parental monitoring.

A new challenge facing Baszucki is the simple fact that kids grow up. “[Roblox will] have to sort of thread this needle of having content that is interesting to an older audience, maybe more mature content, but also keeping their young children on the platform safe,” says Kellen Browning, a New York Times reporter who covers the gaming industry.

One potential answer lies in the metaverse. Hints are emerging as to how that might work. The music streaming service Spotify created an island on Roblox this year. There, players can create their own music and hang out in digital music venues. Gucci launched a whole Roblox town, including a garden, café, and store—where players can buy Gucci-branded items for their avatars. In June, pop star Carli XCX gave a performance on Roblox in partner­ship with Samsung.

It’s unclear whether these marketing schemes will lure older users to Roblox, but Baszucki says he is bullish about the potential of the metaverse and the willingness of consumers to buy into it. He sees it not as a single destination but as a new category of protocols that people and companies will use to build an array of interactive programs.

As usual, the kids are leading us forward.

Louise Matsakis is a freelance technology journalist based in Los Angeles. Email her at stanford.magazine@stanford.edu.

Once upon a time, student participation during football games was flipping awesome.