To many of her broadcast journalism colleagues, Sylvia L. Jones had the ideal gig: She was an award-winning special projects producer in her hometown of Chicago who took deep dives into plum assignments. Yet in 2016, at age 44 and “with everything to lose,” Jones decided to blow that all up. Her follow-up move? Pursuing a career as a Hollywood TV writer, which she had first imagined for herself in the early 1990s, in the Ujamaa TV lounge.

Every Thursday night, members of Stanford’s Black community would gather in that snug space to watch The Cosby Show, followed by A Different World. “It was a bunch of smart people, enjoying smart TV, with people on it who looked like us,” says Jones, ’93. “I felt this burning thing, like ‘I want to see if I can do that’—create that feeling we had in that room.”

Jones’s writing talent and work ethic, her friends predicted, would make her a showbiz superstar. “I thought Sylvia would be the next Oprah,” says Ashanti Hunt, ’93. “If not in front of the camera, then influencing things behind it.”

Just one problem: Jones had no industry contacts or road map. Hollywood intimidated her. “I’d hear about people who waited tables in L.A., hoping to get discovered,” she says. “I knew I couldn’t come from the South Side of Chicago, make it through Stanford, and tell my mother I was going to wait tables in L.A.” Journalism seemed safer, more academic. “Academics I could do. And I could still tell stories, put them on TV, and have an impact.”

After graduating in three years with degrees in psychology and communication, Jones earned a master’s in journalism from Northwestern. She worked as a freelance morning-show writer, a substitute teacher, and a reporter and producer before landing at WKBD-TV in Detroit. There, she found her niche as a special projects producer—“a hybrid between being the producer in control and the reporter who gets to interface with the people, which is what I love to do most,” she says.

In May 2001, she moved to Chicago and spent 15 years at WGN and ABC7, covering stories from 9/11 to local gun violence to the 50th anniversary of the Selma march. Along the way, she collected two Emmys and an Edward R. Murrow Award, and became known for her integrity, humility, and compassion. People trusted Jones to tell their stories, says former ABC7 colleague Hosea Sanders. “She listens, and she looks out for people.”

Being one of the few Black female voices at the table presented challenges, Jones says, that have carried over to her second career. “My journalism career was exciting. It was rewarding. It was more than I could have imagined,” she says. “But I found myself constantly fighting—in editorial meetings to get coverage for certain events or stories, or fighting about how certain stories were being made.”

Into the 2010s, she was on top of her game professionally. But in her personal life, she was enduring what she calls the worst seven years of her life. She lost her dad to congestive heart failure. Her mom died after a three-year cancer battle during which Jones served as her primary caregiver. And Jones became “an instant single mother” when her grandnephew and grandniece suddenly needed a home. “The day that I rescued the kids was the one-year anniversary of my mother’s death,” she says. “I was a mess. But I immediately had to jump into make-it-happen mode.”

As a journalist, Jones never knew where she’d be when it was time to pick the kids up from day care. Every day, as that hour drew near, “the anxiety started churning my stomach, like, am I going to be able to get off and get them?” she says. “It was physically, mentally, and emotionally exhausting. There’s this expectation that, as a Black woman, you’re so strong and nothing is too much. A lot of times, I was suffering and really at my wits’ end. I didn’t even realize how much I needed help—help with them as well as help for my own mental health.”

In August 2015, Jones’s frosh roommate and close friend, Erika Jackson, ’93, died of breast cancer. “I felt like I was walking around with a dark cloud over my head,” says Jones. Her doctor thought she was depressed. She sees now that he was right. “I thought I was in survival mode. I was doing what I needed to do. I felt like I couldn’t stop because too many people were depending on me.”

Eventually, the kids rejoined their mom, and as the fog began to lift, Jones thought about shaking things up. While covering the 2016 presidential primaries, “I started asking myself, if money weren’t a factor, if fear weren’t a factor, if what people think weren’t a factor, what would you want to do with your life?” she says. “And it came back to, I wonder if I could be a TV writer in Hollywood?”

She didn’t think Hollywood could beat her up any worse than life already had—and she didn’t want to regret not trying.

She found a 10-month screenwriting program at UCLA and applied without telling her friends or family. Getting in would be her cue to tear up the script.

She got in. The program started two weeks later. When she announced she was leaving, even her closest colleagues were stunned. “She had what was considered a dream job in local TV,” says Sanders. “And she was the best in the business at what she did.” Jones had doubts too. But she didn’t think Hollywood could beat her up any worse than life already had—and she didn’t want to regret not trying.

The UCLA program consisted of screenwriting workshops and lectures about the industry. While her TV journalism training helped her keep her scripts tight and present things in a visually compelling way, Jones had to relax her hard-wired adherence to factual accuracy. “In my scripts I’d want to stick to the facts of the way something would actually happen,” she says. “But that might not be the best thing for the story. UCLA helped me realize: Now I can let anything happen. A person can walk into a store, knock over the whole display, and get away clean while everyone just stands there.” 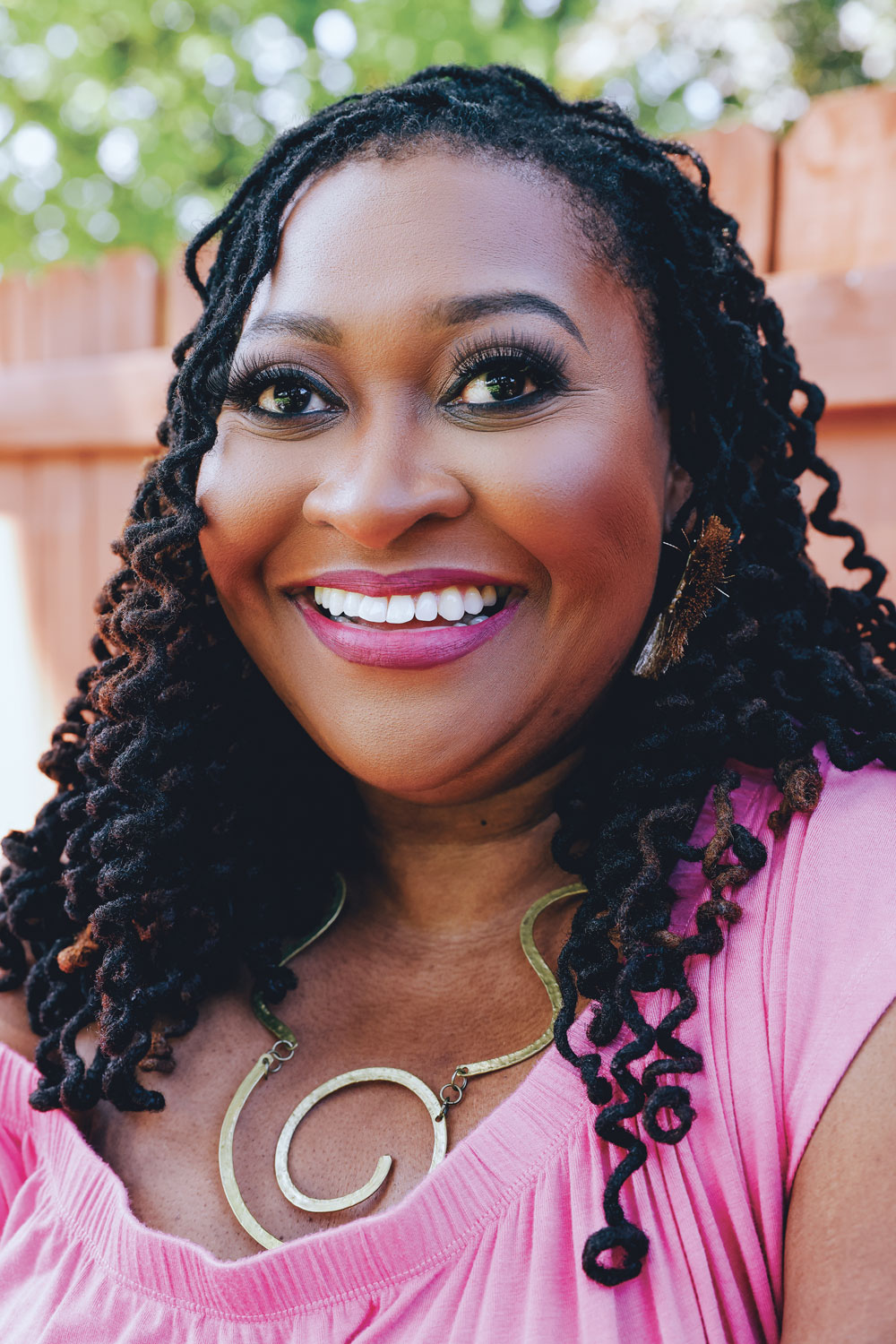 Jones had started job hunting as soon as the program started. After four months of networking, she landed an entry-level gig as a production assistant in the props department for the second season of Criminal Minds: Beyond Borders.

When the show required facsimiles of Italian mail from decades ago, Jones contacted the head of the Italian department at a local university, who sent her examples of vintage Italian postal marks. “When I told my boss how I had gotten all this information, her mouth dropped,” says Jones. “She was like, ‘We just google everything!’”

When the show was about to wrap, Jones asked executive producer Adam Glass for a meeting. She showed up with two spoons and a bowl of banana pudding. (Glass had mentioned his Southern grandmother, and Jones thought he might like Southern desserts.) They discussed her life story and her ambition to write. “I loved her story, loved her energy,” says Glass. His next job, as it happened, was as executive producer for The Chi, a new drama about a neighborhood on Chicago’s South Side. The writers’ room might need someone who knew the place as well as Jones did.

Jones became the writers’ assistant for the show. She tracked and took notes on everything that happened in the room, and she even wrote a late-season episode with Glass. “It’s an all-encompassing job, and some people really struggle with it,” says Glass. “But Sylvia took to it like a fish to water. She had strong opinions about what was or wasn’t being shown about the neighborhood, and she had no problem speaking her mind—it’s one of the things I love about her. I think that comes with age and experience. Most people see being older as a disadvantage; I think it was every advantage to Sylvia. Her scripts were really good and authentic—she writes the way people speak.”

Her next job was as a writer on Pearson. As Jones was settling in, a director from The Chi passed her name to a producer at Lifetime who was developing a biopic on gospel vocalists the Clark Sisters. Jones would be the fourth writer to take a shot at writing a workable script.

The parallels between her own life and that of the Clarks, five sisters from Detroit who were managed by their devout, hard-driving mother, were striking: Jones was the third of four sisters, and her own mother “had that attitude of holiness or hell—you weren’t going to have time to get in trouble because you were going to be in church,” says Jones. A fan of the Clark Sisters from childhood, Jones was also a singer and had sung in the Stanford Gospel Choir.

‘Wait a minute. Did I just make the person who wrote the Scream franchise shiver?’

Jones did multiple interviews to tease out the dynamics among the sisters. “Everybody saw the fire, but you’ve got to get interviews from five people because they all saw something different,” she says. “The knowledge of how to pull together the information that I needed to create a story for that movie came directly from being a journalist.”

Her script was a hit. The April 2020 premiere of The Clark Sisters: First Ladies of Gospel was the most watched film on Lifetime in four years and won a Satellite award for Best Motion Picture Made for Television.

Jones has also delivered on projects far outside her comfort zone. When she was interviewing with Scream creator Kevin Williamson for a job on Tell Me a Story in 2018, she warned him that she had little experience with key elements of the series: Nashville, country music, horror.

Williamson told her, “I’ve read your writing; you do character and emotion. That’s what we need. I can take anything you write and sprinkle horror dust over it.” The show represented a creative breakthrough for Jones. “My best day was a day that we were pitching on ways to kill somebody,” she says. “And I pitched something that was so gruesome that Kevin goes ‘Aaaah!’ I said, Wait a minute. Did I just make the person who wrote the Scream franchise shiver? That was the moment I realized I can do this. I can use my imagination and be a real writer.”

Lately, her imagination has been busy: Two shows Jones wrote for—Power Book 4: Force on Starz and The Endgame on NBC—have aired this year. (Episode 4 of the latter, for which she was the head writer, involved two other Stanford alums: director Jono Oliver, ’87, and series co-star Ryan Michelle Bathé, ’98.) Jones is also pitching show ideas, as well as planning retreats for would-be TV writers like she once was, with no access to the industry and no idea how it works. Yet she isn’t sure a straighter path to Hollywood would have been the best one for her. “I strongly believe that a lot of my success comes because of my journalism career,” she says. “Without it, I don’t know that I would have made it to where I am now.”