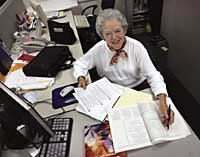 Frances Theiss first developed a curriculum for bilingual education when she taught at an elementary school in the San Jose Unified School District. “You’re better off teaching a child to read in his first language that he has spoken at home,” Theiss says, and explains that she helped her students make the transition to reading English first by teaching short vowel sounds and eventually instructing students in English and Spanish side by side.

These days she uses this same strategy as a volunteer tutor. However, her pupils are not children, but inmates.

Theiss volunteers five days a week with the Vision Literacy Program at Elmwood Correctional Facility in Santa Clara County. She works with inmates who range in age from 18 to 65, tailoring her teaching to the incarcerated men’s individual abilities; many have learning disabilities.

Her students are “very polite and well behaved,” she says. “Not once have they said, ‘I didn’t do it’ or have they tried to claim innocence.” She has helped at least five inmates earn their GED certificates.

Theiss has four daughters and was widowed when her husband, Roy, died 15 years ago. She retired in her late 50s after 13 years teaching special education at Stanbridge Academy in San Mateo. She also volunteers with Adult Basic Literacy Education (ABLE), based in Mountain View. She tutors an immigrant from Iraq who has the goal of obtaining a GED.

“The most rewarding aspect of volunteering is working one to one,” she says. CBS affiliate KPIX-TV recently honored Theiss with a Jefferson Award for Public Service in recognition of her commitment to adult literacy.