What's Fair and What's Not 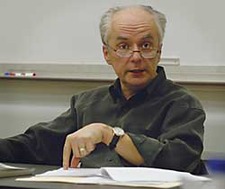 The conundrum silences the graduate students, briefly. Here’s the situation: a family has one son who is autistic and mentally retarded; his younger sister is not. Is it fair for the state to spend six times more on the boy’s education? Or should an equal amount be spent on both children?

Adding to the tension, we’re talking about real kids. The professor’s kids.

After an initial silence, hands start to go up. Tentatively. The state could simply ignore the needs of the severely disabled child, one student suggests. Deep frowns all around. Or perhaps the state should spend even more on that youngster, another says.

As alternative solutions are proposed, Professor Eamonn Callan tosses in ever thornier complications. “The hardest questions are about kids like Garrett,” he tells the 13 women and five men seated around the seminar tables. “I’ve been very grateful to California for the schooling Garrett got. But was what he got what justice required? Can need be given excessive weight?”

Education 320X: Social Justice in Education is no intellectual cakewalk. Starting with the first class, Callan wants his students to understand they’ll be digging into complex issues as they explore the role of schools in promoting—Or obstructing—social justice. As a political philosopher who’s interested in education questions, he confronts hot-button issues: affirmative action, identity politics, charter schools, the challenges of multiculturalism. He imagines aloud a student leaving the discussion thinking, “I thought statistics was bad, but philosophy is really unbearable.”

That light touch, plus the pizza he provides for the class that stretches from 6 to 9 p.m., helps to make the difficult wrangling more approachable. “Anger about the lack of social justice in school systems is what led me to graduate school,” says Alicia Grunow, a former elementary school teacher in Denver and New York City, and now a first-year doctoral student in the School of Education’s administration and policy analysis program. “When [Callan] was talking about thinking about equality as an activist versus thinking about it as a philosopher, I thought, ‘I haven’t really spent a lot of time thinking through what [social justice] means.’ That was attractive—the idea that if you’re going to pay lip service to something, you need to think about it.”

A native of Ireland, Callan developed the social justice course at Canada’s University of Alberta, where he taught for 20 years before coming to Stanford in 1999. The authors on the syllabus have changed over the years, but the pairing of conflicting views for each week’s assigned readings has remained a constant. “One of the things I really work hard on is getting students to read their intellectual adversaries with charity,” he says. “If you can really understand what is most cogent in a position that you believe to be profoundly wrong, you’ve learned something very precious.”

Callan wants his students to take a position on the readings and come to class prepared to do articulate battle: “I can’t compel you to speak, but it’s important to be willing to step up and speak.” Responsibility for initiating discussion rotates among class members, and students meet with him to lay out their arguments before they make their presentations to the group. He admonishes them to put their internal censors “in cold storage.”

A few years ago, Callan says, he wouldn’t have been able to talk about so personal an issue as his family’s struggles with his son. But now he deliberately chooses charged topics to better prepare his students, who may go on to work in education advocacy or education research. “We may end up touching on areas that are emotionally explosive in our lives, but that is not an excuse for us to stop thinking clearly and rigorously about what the fairest solution to a specific social problem would be,” Callan says. “Just because I am the parent of a disabled child doesn’t entitle me to reject the idea that spending on such children might be more than justice demands.”

Getting your mind right is the key to achievement.