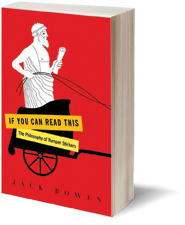 Peanuts creator Charles Schulz once remarked, "There's a difference between a philosophy and a bumper sticker." Jack Bowen agrees. And yet, he thinks the pithy slogans often introduce deeper truths. In If You Can Read This: The Philosophy of Bumper Stickers (Random House), Bowen, '95, uses these "mini manifestos" as starting points for discourses on such heady topics as the nature of reality, the construction of the self, the illusion of certainty and the meaning of life. Along the way he name-checks some of history's great thinkers from Jean-Paul Sartre to Jerry Seinfeld. "Readers may find themselves involved in fender-benders once they realize how much fun it is to think about the messages in bumper stickers and start tailgating in order to read and analyze them," says Stanford professor emeritus of philosophy John Perry, who co-hosts the Philosophy Talk podcast. Bowen, who teaches philosophy at Menlo School in Atherton also appears in a documentary, The Nature of Existence, released this summer.

He Lived to Teach