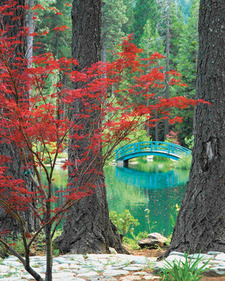 High in Sierra Nevada, an unusual garden blooms in the wilderness. Named for natural springs that tumble through old-growth forest, Big Springs Gardens has evolved under the meditative eye of Don Phillips, MBA '59, former assistant dean of the Stanford Business School. Some 20,000 visitors have enjoyed the natural sanctuary since its paths opened to the public in 2002.

Phillips, who turns 87 in October, began contemplating his 30-acre canvas more than 40 years ago. In the early days he didn't plan to create a garden, he simply cleared a bit of underbrush and raked a few leaves. Nature obliged these tentative strokes with brilliant color; wildflowers burst forth where the brush had been. The garden evolved over the decades: Phillips carefully textured the landscape with plants and features that, if not native, were still in some sense an "extension" of what was already there.

"The impressionist painters have been a major influence in my sense of gardening," he says. Spanning the pond near the garden entrance is a replica of Claude Monet's bridge at Giverny. Phillips also has drawn inspiration from gardens the world over, from Italy to England, Japan to New Zealand.

While some refer to his work as "Monet in the Mountains," he prefers to let nature take artist's credit. "As the garden came along there was no master plan because the master plan was already there. It was a case of interpreting. I spent a lot of quiet time alone, just feeling and thinking about how I could enhance what nature has already provided."

Summer tour packages include a brunch or barbecue buffet at the restaurant overlooking the pond and admission to the gardens. Yet despite glowing reviews from casual visitors and professional garden writers, Big Springs was hit hard by the recession.

With deep regret, Phillips placed the property on the market last fall. But when no buyer materialized, he took it as a sign. This past June his collaborative, living work of art was once again open to the public. "It represents a real challenge to figure out how to preserve this," he says. "My dream is to see it carried on. The gardens can enrich lives for generations to come."

JENNY PEGG is a doctoral student in the program in history and philosophy of science and technology.

The Poet of 'The El'