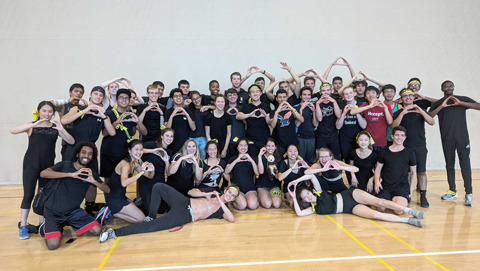 A game of dodgeball begins with all the balls in a row in the middle of the court. The competing teams line up on opposite ends of the gym, and when the referee blows the whistle, everyone sprints forward to snatch as many balls as possible.

Melee ensues. It’s a race to get every member of the other team out, primarily by hitting each of them with a ball. Step outside the court? You’re out. Hold a ball for more than three seconds? You’re out. Argue with the referee? Bye-bye.

Every year, a dodgeball tournament goes down among Stanford’s freshman dorms, and for three years in a row, Otero House in Wilbur Hall had reigned supreme. So, the stakes were high when the dorm’s captains began their work last fall putting together a team.

Co-captains Nick Gessner, Alexa Thomson and Carson Conley started with recruitment emails. “Do you want to pelt balls at people’s faces?” they wrote. They went from door to door soliciting sign-ups. A common response: “I have a Chem 31A midterm next week.” The captains’ reply: “Hey, we’re in that class too.” They obtained a sign-up sheet from a rival dorm, Rinconada, and passed it around. We can’t let Rinc win. And on the morning of the tournament, they ran through the halls, yelling for people to come out of their rooms.

“We had the mentality that we could not lose,” Gessner says. “I lost my voice that day.”

Mostly, it’s a numbers game — Otero recruited 53 of its 85 residents to participate, more than any other house. But there was more to the cutthroat competition than that.

During two warm-up games and four single-elimination rounds, the players honed their key strategy: pass as many balls as possible to their aces, especially varsity athletes Parker Killion (water polo) and Giana Gayles (heptathlon). And they trod carefully with the referee, who played up his part as an unbending absolutist.

In a nail-biting final match with Arroyo, Otero rode its superior numbers to a win and finished with the glow of newly formed bonds. “I would call it the symbolic event of our dorm community,” Conley says.

As he and his teammates see it, they’re building a dynasty. “You have to teach the next Otero generation what it means to be a dodgeball champion.”