Q: How will real estate markets/values be affected by physical impacts of global warming? How is the insurance industry going to use climate change models to inform rates and premiums?

“Insurers rely upon their ability to predict the economic consequences of future events. That’s how premiums are set; that’s the kind of assessment they do of their own exposures. In a period of changing climate, when the very basis of their decisions may be changing, then they need to have a better understanding of climate change. . . . The fact that future events may not be a linear progression of the past, but in fact may have changed as a result of natural variability, or human activity or whatever, is an important thing to be taken into consideration.”
-Franklin Nutter, President, Reinsurance Association of America

The role of climate change in confusing and complicating risk analysis has become painfully obvious over the past decade.  In 2007, the Intergovernmental Panel on Climate Change projected average global temperature to rise between 4 and 11 degrees Fahrenheit during the 21st century. Most scientists agree that a warmer world will lead to more frequent extreme weather events. Heat waves, heavy precipitation and wildfires will continue to become more frequent and hurricanes are likely to become more intense. According to one recent study, the frequency of Category 4 and 5 hurricanes has doubled as a result of warmer oceans since the 1970s.

These weather projections have broad implications for both the insurance industry and homeowners. Catastrophic losses cost the U.S. insurance industry $62 billion in 2005—up from an average of $44 billion a year in the 1950s. Many coastal states have reported steeply rising premiums and insurance companies unwilling to write policies. The insurance crisis is only projected to worsen as more severe weather sets in. 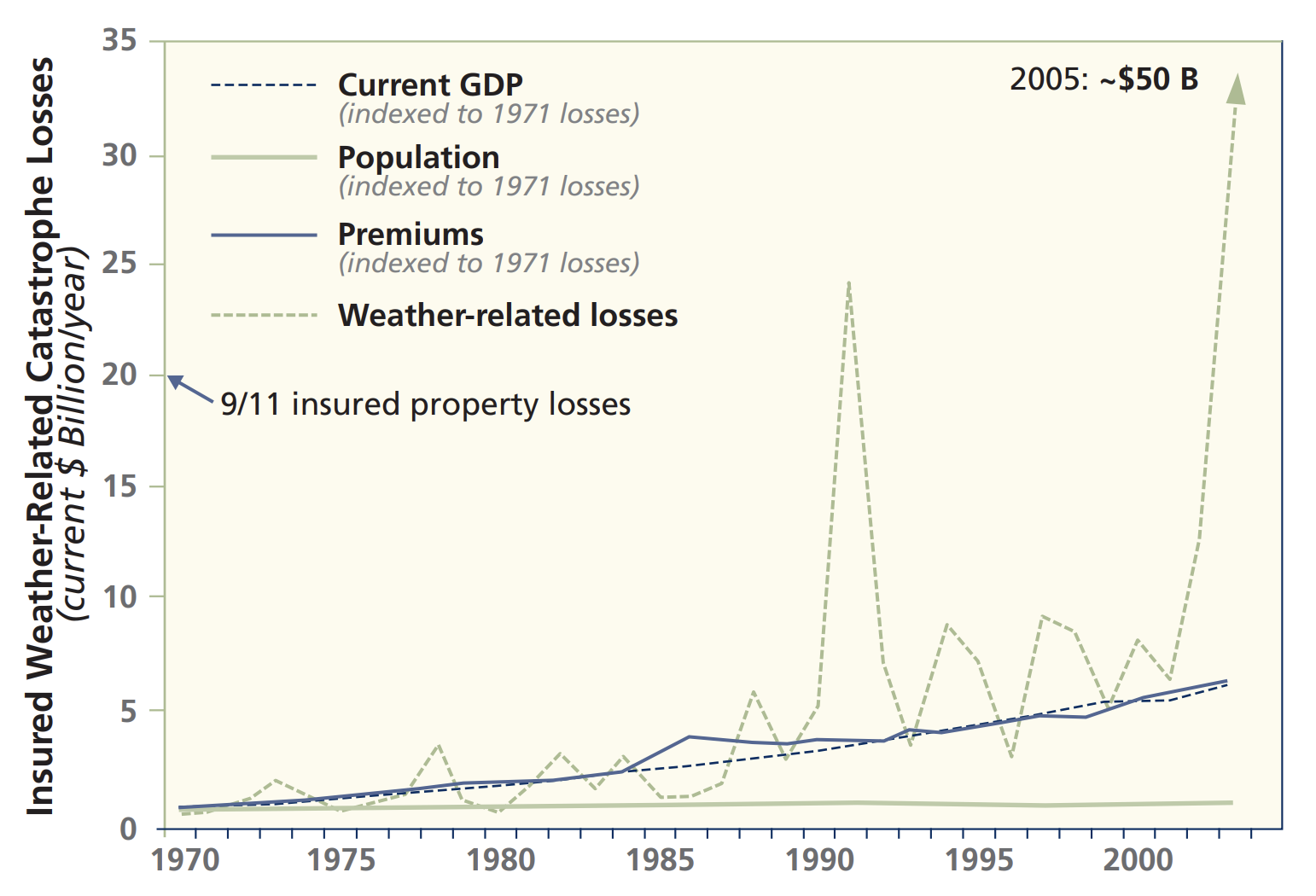 Show me the (California) numbers!

Some $2.5 trillion dollars of California real estate is at risk from projected climate change impacts.

Thirty-eight percent of California’s houses—4.9 million of them—are in designated high-fire-threat areas. The frequency and severity of wildfires is projected to increase throughout the 21st century.

The number of large wildfires in California is projected to increase by 12 to 53 percent, depending on the climate scenario. Assets of $1.6 trillion are at risk because of fire. Risks to the foothills surrounding Stanford are expected to increase.

Some $900 billion worth of near-shore California homes are at risk from flooding and coastal erosion.

How are insurance companies responding politically?

The insurance industry not only has huge negative incentives to address climate change impacts, insurers can also make money with products designed to mitigate against climate change. For example, pay-as-you-drive (PAYD) auto insurance offers reduced rates for car owners who drive less—they’re less likely to have an accident, and also produce less greenhouse gas. PAYD is in its formative stages, and is currently available in Maryland, among other states, through Progressive Insurance.

Industry leaders have made clear that they support more aggressive climate legislation. Even the beleaguered insurance giant AIG set a climate change reduction policy in place back in 2006, stating that the company “recognizes the scientific consensus that climate change is a reality and is likely in large part the result of human activities that have led to increasing concentrations of greenhouse gases in the earth’s atmosphere.” That particular insurance group might have more pressing concerns at the moment, but a 2009 study found that the idea is catching on. All told, 244 insurers in 29 different countries—and representing $13 trillion in assets—were involved in different efforts to combat climate change.

How are consumers responding? How should you respond?

According to Realty Times, a real estate news and advice journal, climate change is already beginning to impact the choices some people make about where to buy a home. With 15 to 20 percent of Americans moving each year, consumers are beginning to ask whether it makes sense to move to low-lying, drought-prone, and coastal areas. Even if climate change doesn’t cause homebuyers to rethink location, market forces will likely force changes through inhibitory insurance costs in high-risk areas.

Higher temperatures and more frequent heat waves could also impact housing choices because of rising energy costs. Heating and cooling costs impact both location choices and the decision of whether to buy a larger versus a smaller home. Suddenly that mansion you’d been eyeing in Arizona isn’t looking like such a good investment.

In general, when faced with global warming and rising energy costs, it is best to look for real estate outside of natural hazard zones. Things to look out for are areas at risk for wildfires, coastal erosion, sea level rise, flooding and hurricanes. It is also a good idea to invest in a smaller, more energy-efficient home with a minimal daily commute.

Kelly Coplin received her bachelor’s degree in human biology in 2009.

Finding alumni with tales to tell is part of the fun.