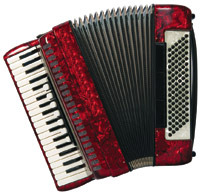 The accordion is the Rodney Dangerfield of instruments: It gets no respect. Evoking Eastern European folk music like polka, klezmer and German oom-pah, it’s seen as anachronous, kitschy at best. That’s why Chris Saccheri, ’98, started Let’s Polka, a blog devoted to promoting this misunderstood instrument. Saccheri first took up the sqeezebox in 1995, and played for two years as a member of the Stanford Band before becoming drum major his senior year. He later met his wife and fellow Let’s Polka contributor, Anna, through their mutual love of the accordion. “The accordion has been the butt of jokes for years and most Americans associate it with Lawrence Welk or ‘Weird Al’ Yankovic,” he says. “Our site challenges that perception.” But in a year when the National Academy of Recording Arts and Sciences dropped the polka category from the Grammy Awards (to add insult to injury, the announcement came during Accordion Awareness Month in June), the two have their work cut out for them. That’s OK, says Saccheri, “I love being in the underdog’s corner.”