Penciling in a Career

In children's books, Betsy Franco found the career that worked with motherhood. 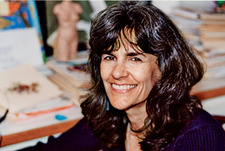 Betsy Franco, amid the happy jumble of papers and mementos in her Palo Alto home, is a little reminiscent of the hummingbird that flits around a feeder outside of her office window. Her creativity, she says, works best when she's darting among projects.

"I generally work on five books at once. It wards off writer's block," says Franco, '69, the author of 80-plus books for young readers, including many that focus on math, science and creativity, and several anthologies of poetry written by teens.

This year has been particularly fruitful in terms of publishing. A Curious Collection of Cats (Tricycle Press) melds Franco's poetry with Michael Wertz illustrations that curl up or cavort in feline ways. The picture book Pond Circle (Simon and Schuster, illustrated by Stefano Vitale) captures the magical and rhythmic beauty of nature. Her debut young-adult novel, Metamorphosis: Junior Year (to be published by Candlewick in October), follows a teen as he wryly records all his and his classmates' high school drama as modern-day mythology. She collaborated on this nod to Ovid with her middle son, Tom, whose old high school sketchbook provided inspiration for the story and artwork for the text.

Franco's three sons have provided her with material—but not only in the usual sense of harvesting details from their childhoods. She's found inspiration to push her own boundaries by looking at their creative accomplishments. In the family living room, Tom's whimsical sculptures share table space with acting awards won by her eldest, James, of Spider-Man and Milk fame. Dave is an actor as well.

Betsy Verne majored in painting at Stanford, where she met her future husband, a math major who also excelled in painting. (After graduation, Doug Franco, '70, got a master's degree in business from Harvard. He runs a nonprofit agency that helps women and children in Third World countries and a company called Secure Box, which is developing a security device for shipping containers.) In the early years, Betsy Franco juggled jobs that included "answering customer complaints for Ma Bell" and teaching elementary school. "But with three very adorable, rambunctious young sons in the house, I couldn't even set up my paints," she recalls. "I knew that I needed to find something creative to do, or I would wither."

So she deliberately tried another form of expression. "I reasoned that writing would be simpler with young children because all I would need was a pencil."

While she was freelancing for an educational publisher, an editor asked her to write some math poems. Dozens of books followed, including 2003's Mathematickles, which Franco calls her "autobiography," because it's so reflective of the way she sees the world, "logical and creative at the same time." That book's success gave her the confidence to "go with my off-beat ideas. . . . I love putting together elements that normally don't go together, such as math and poetry, or counting with birdsongs. It's like a chemistry experiment. You put them together and wait for the explosion."

Her editor at Candlewick, Mary Lee Donovan, says, "Life is an amazing and astonishing journey to Betsy, every triumph and tragedy hiding unique and valuable gifts. She brings that passion for life and experience to every single project and, I daresay, to every single day."

Franco is revising a young-adult novel that takes place at Stanford and rewriting a screenplay based on that book. She's also working on poems about dogs for a Curious companion volume, a collection of playful yoga poems, and another picture book.

With her actor sons as role models, she began taking drama classes through Stanford Continuing Studies and now belongs to an improvisational comedy troupe and the sketch comedy troupe Suburban Squirrel. When James mentioned his mother's acting on Late Night with David Letterman, it led to a popular Funnyordie.com video ("A message from James Franco's mom"), along with a Hollywood audition for a film. (She didn't get the role, but enjoyed the "peek into the world that two of my sons spend time in.")

Most important, acting has brought a new dimension to her writing. "I can feel the characters from my books in my body instead of just my head, and I can hear them talking." Plus, "it's the perfect counterbalance to writing, which is a solitary activity. I feel more whole since I have two creative outlets. Younger, too!"

JILL WOLFSON, the editor of Bay Area Parent—Silicon Valley, is the author, most recently, of the young-adult novel Cold Hands, Warm Heart.

ONLINE ONLY: The Telltale Hip

ONLINE ONLY: The Telltale Hip