What You Don't Know About Cadavers 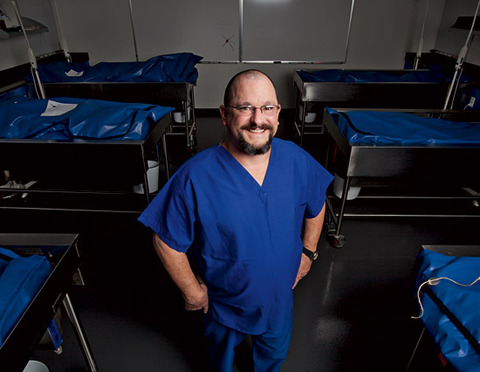 WHAT HAPPENS AFTER YOU DIE? If you donate your body to Stanford, you will likely find yourself in the hands of Chris Dolph, the autopsy attendant in the division of human anatomy. Along with administrative counterpart Ruth Hages, Dolph runs the Willed Whole Body Program, which oversees the process of acquiring 50 to 70 human cadavers each year for purposes such as anatomy instruction and surgery training. Dolph arranges transportation for the bodies, embalms them and works with students in the anatomy lab, who dissect each cadaver in teams of four. He also fields the occasional wacky phone call, like the time when a woman informed him that she was ready for him to remove her body. "We had to carefully explain to her that we don't take people who are still alive."

IT'S A FAMILY BUSINESS.

Dolph is the second generation of cadaver handlers in his family. His father, John, was the autopsy attendant at Stanford for more than 40 years until he retired in 2007. "That's why my job isn't weird to me, because I've been around this type of thing my entire life."

Dolph is available by pager 24 hours a day, 7 days a week, to respond to calls about pre-registered donors who have passed away. After determining whether the body can be accepted, he calls a local funeral home to organize the logistics of transporting the cadaver to a refrigerator in the mortuary. The cost? Free to donors who live within a 75-mile radius of Stanford.

THE COMPETITION IS STIFF.

While nearly everyone who applies for the Willed Whole Body Program is considered a potential donor, Dolph rejects about 30 percent of registrants at the time of their death. Anything that might lead to a difficult, dangerous or incomplete dissection renders the body unsuitable for the anatomy lab's purposes. Among the possible reasons for rejection: obesity, jaundice, open wounds, excess fluid in the extremities, an infectious disease, or the performance of an autopsy. Because the final decision is made after the applicant has died, the program strongly recommends having a corpse fall-back plan.

Dolph won't share the exact combination of solutions he uses during the two-day embalming process, but he estimates that he goes through nearly 800 gallons of embalming chemicals each year. If that sounds like a lot, it is. A typical mortuary might use two to three gallons of fluids to preserve a body for a funeral, but Dolph uses up to 25 gallons per body to ensure that each one arrives at the anatomy lab in top condition—even though a body can be held for two years or more before being dissected. "If these cadavers were kept for 300 years, they would probably look the same as they do now." That's his conjecture, however, because each body is cremated after its use by the lab; the ashes are given to the family or interred at the crematorium. That takes place at the end of each quarter after the anatomy students and instructors hold a memorial service to honor those who donated their bodies.

PART OF ME, WHY NOT TAKE PART OF ME?

Dolph isn't registered to donate his body because he feels strongly about being an organ donor: The Willed Whole Body Program can only accept fully intact cadavers. Plus, "If I did do whole body donation, the person embalming me would probably be someone I trained, and that would be more than a little bizarre." No one at the anatomy lab has pulled back a white sheet to reveal the body of someone they once knew, and Dolph plans to keep it that way.

MARIE C. BACA, '06, is a graduate student in communications.