A month after taking office, President Ray Lyman Wilbur raised concern about Stanford’s 24 fraternities, which were consistently in the bottom third of scholarship lists (along with varsity football and baseball players, who often were fraternity members). By comparison, the university’s nine sororities maintained high scholarship standards. Many frat houses had fallen into disrepair, and local merchants often complained about unpaid bills. “A student’s principal business is his study,” Wilbur wrote to parents in August 1916. Students who weren’t content “to lead the simple, clean, industrious life,” he said, should go elsewhere. 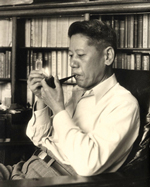 A long career at Stanford did not shield Professor Yamato Ichihashi and his wife, Okei, from being interned along with other Japanese citizens and Americans of Japanese descent in February 1942, per Executive Order 9066. After an initial stay at Santa Anita Racetrack in Southern California, Ichihashi and his wife were transferred to Tule Lake in Northern California. Ichihashi, Class of 1907, MA ’08, was granted an official leave of absence, and his campus residence was watched over by colleagues and friends, especially historian Payson Treat.

SLAC installed the first World Wide Web server outside Europe in December 1991. Work on it began shortly after SLAC physicist Paul Kunz brought word of the brand-new “web” when he returned in September from a meeting at CERN, the European particle physics center where it was invented. Originally developed as a tool for worldwide high-energy physics collaborations, it remained a tool of physicists until 1994, when user-friendly browsers were developed and use of the web exploded.

History Corner is produced by the Stanford Historical Society.