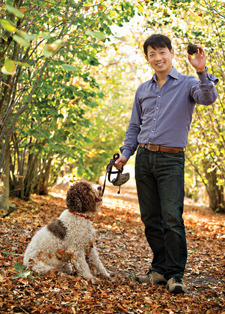 Robert Chang had appropriate training—postgraduate degrees in electrical engineering and business—to become a CTO. But in his case the initials stand for chief truffle officer.

It all began 13 years ago at a trattoria in Munich, when Chang sat down to a plate of buttery tagliatelle adorned with an extravagant ingredient he had never before tasted. As a waiter shaved paper-thin slices over the silky strands of pasta, a pungent, musky fragrance filled the air. It was a black Périgord truffle, so prized that it typically commands upwards of $1,200 a pound.

“I wanted to see what the fuss was about,” Chang says of his first encounter with the much-fancied fungus. “I was blown away. I had never smelled anything like that before. It was almost addictive.”

At that point, Chang, ’92, MS ’93, MBA ’98, was an experienced product manager and marketing executive working in Germany through a Robert Bosch Foundation fellowship for mid-tier professionals. But by 2007, he had teamed up with a leading British expert on mycorrhiza (the symbiotic relationship between fungi and plant roots) to establish the American Truffle Company.

Truffles grow underground at the roots of oak and filbert trees—if conditions are just right. (See sidebar.) ATC works with an Oregon nursery to sell trees inoculated with truffle spores; a handful of other American nurseries sell truffle trees, too. But Chang says his company has no direct North American competition, because it also provides would-be growers with the know-how to amend soils, monitor growing conditions, manage orchards and market their harvest—and it sells fresh European truffles. From his San Mateo home, Chang works with six associates and his U.K.-based partner, Paul Thomas.

“It’s like a Silicon Valley start-up—except we’re doing something highly unconventional in an area that’s not hypercompetitive and won’t be anytime in the foreseeable future, because it has high barriers to entry, if you want to use an MBA term,” Chang says with a chuckle. “Growing truffles successfully is much like raising children: Nature and nurture are both of paramount importance in both. If you are missing either one, you won’t be successful at either.”

ATC has clients in 25 countries and each January hosts a popular truffle festival in Napa. Among its customers are such noted California winemakers as Peju Province Winery in Rutherford, Roca Family Vineyards in Napa and Robert Sinskey Vineyards in Sonoma, all of which have transformed lesser vineyard properties into truffle tree orchards.

For vintners, the lure is the fact that truffles can reap five times the revenue that the same acre of grapes might bring. And the trees need far less attention than vineyards, requiring only regular irrigation and weeding.

Now nearing the pivotal minimum five-year mark for an inoculated tree to potentially start producing, Sinskey may very well harvest his first black truffle this winter. That would make his the first commercial-scale orchard in Napa and Sonoma wine countries to succeed. “I probably would not have proceeded if it weren’t for meeting Robert,’’ Sinskey says. “He is a persistent and persuasive truffle spokesman.”

For chefs, the possibility of getting truffles the same day they’re harvested makes U.S.-grown produce especially attractive. Executive chef Ken Frank of the Michelin-starred La Toque in Napa has been offering special black truffle menus and dishes for years. He goes through close to 200 pounds of the fungus annually.

“There’s a very primal attraction about them,” Frank says. “When you add their mystery and their scarcity, it makes them even more compelling. Foodies and chefs crave them. It’s long been one of my favorite ingredients.”

The only son of a Taiwanese pilot and a high school teacher, Chang says he grew up eternally curious and a natural-born tinkerer. He credits Stanford for providing the foundation that shaped his interests. For instance, as an undergraduate, he won a lottery that gave him a spot in the Business School’s always-full introductory case study class; that sparked his interest in business and marketing.

To fulfill Stanford’s course breadth requirements, Chang took economics classes focused on how Japan rebuilt itself after the war. That led him to spend much of his junior year in Kyoto, living with a host family and then interning at Fujitsu in Tokyo. When he returned to Stanford, he continued studying Japanese—the only electrical engineering student in his classes. After graduation, Chang worked as a hardware designer at Silicon Graphics, where he put his language skills to good use working with Japanese engineers.

He had always intended to go to business school, though, and returned to Stanford for his MBA. After working for other Valley high-tech companies in product management and marketing, he won the Bosch fellowship. From June to September of 2002, he lived with a host family in Berlin and studied German intensively before interning with Siemens, the country’s powerhouse engineering firm.

It was in Germany where he had that fateful first truffle.

“I started thinking, ‘Wouldn’t it be nice if I could grow them?’” Chang recalls. “I put on my MBA hat and started looking for someone who had the science to grow truffles. I did a vigorous analysis of everyone I could find on the Internet. I found only one guy with the science—Paul Thomas.” Thomas is the lead researcher and managing director of Mycorrhizal Systems Ltd.; his PhD work at the University of Sheffield had led to a pioneering technology for inoculating trees with different truffle species.

Chang wrote to Thomas, inquiring about purchasing inoculated trees. But Thomas had no operations in the United States. Undeterred, Chang flew to London. What was supposed to be a brief meeting turned into a four-hour conversation over several pints of beer at a local pub. At the end of it, Thomas asked Chang to be his partner in a North American operation.

“He was the perfect person because his approach is to do things progressively, slowly, steadily and correctly,” Thomas says. “I told him a number of years ago that I wanted to clone him.”

Nowadays, whenever Chang cooks his favorite carbonara-style truffle linguini, with a creamy sauce made with yolks from eggs that have been stored with truffles, he feels like a very lucky man. “Life could have been very different,’’ he says. “Stanford gave me a diverse set of tools that enabled me to capitalize on opportunities that came my way.”

1. There are native species on every continent except Antarctica.

2. European black Périgord (winter) and Burgundy (summer) truffles have been successfully cultivated outside their native range. Italian white truffles so far have not, but Thomas is making experimental headway.

3. Truffles are highly perishable; their aroma dissipates by half after five days.

4. Specially trained pigs were traditionally used to unearth the fungi; dogs (less likely to devour the harvest) have largely replaced them.

5. Indigenous Oregon truffles, considered by some to be inferior to European species, fetch about $130 to $200 per pound.

Carolyn Jung is a James Beard Award-winning food writer. She is the author of San Francisco Chef’s Table and the creator of Foodgal.com.