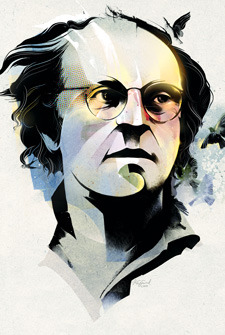 At the end of August 1966, the young Russian poet Joseph Brodsky was in low spirits. He was having trouble readjusting to Leningrad life on his return from 18 months of exile doing hard labor near the Arctic Circle. Brodsky's crime was "having a worldview damaging to the state" and "social parasitism . . . except for the writing of awful poems." There were romantic troubles besides.

A colleague was worried, and kept in touch with him while traveling. One night he telephoned Brodsky from Lithuania, where he was staying with friends in Vilnius.

"Let him come over here. We are all in a good mood here," urged the Lithuanian host, Ramunas Katilius. Brodsky arrived before noon the next day, and even held two readings at the apartment during his stay.

Thus began a lifelong friendship with the Katilius family and a long romance with Lithuania, a comparative refuge during the dying years of the Soviet empire. Eventually, Brodsky gained recognition as Russia's greatest postwar poet and, in exile, a controversial titan on the New York literary scene who taught at several U.S. universities. He belonged to the world, becoming, in his words, "a Russian poet, an English essayist, and of course, an American citizen." He won the Nobel Prize in Literature in 1987 and died at his desk at age 55 in 1996.

Now Stanford University Libraries are the beneficiaries of Brodsky's Lithuanian sojourn, through the acquisition of the Ramunas and Ele Katilius archives. They include the Nobel poet's drawings, poems, samizdat manuscripts and more, from the years before his exile to America in 1972. (Stanford has also acquired a rare book illustrating Brodsky's Watermark, a tribute to Venice.)

The archives' journey from Vilnius began almost by chance. I saw the collection in 2011 during a research trip to that fairytale capital in the Baltic States. Ramunas Katilius and I had a mutual friend, poet Tomas Venclova, who insisted we meet. I had studied with Brodsky and written much about him since, so Venclova thought we would have much to chat about. That's how I found myself in an apartment on the northern side of the city with Katilius, a retired physicist and professor, leafing through his astonishing albums and notebooks.

They held photos of Brodsky's early days in Leningrad, in the icy internal exile in Norenskaya, and with the group of friends who saw him off at the airport. In other photos, Venclova, Brodsky and Katilius are together in the early days of their friendship. I leafed through letters, postcards, sketches and doodlings and manuscripts of poems, both typed for samizdat distribution and handwritten. Brodsky's earliest attempts to compose English poems were included, along with several translations from English.

Almost any individual piece would be a collector's item. Together, it was a literary goldmine. When Katilius told me later he wanted to find a permanent home for his collection, I thought it had to be Stanford.

But a major library doesn't rely on a single recommendation, or the endorsement the acquisition also received from Slavic professors Lazar Fleishman and Grisha Freidin, as well as the relevant library staff. That's how rare book dealer John Wronoski came into the picture.

Wronoski, an expert on modern European literature who has appraised many Brodsky archives, confirmed the Katilius collection's significance. "The drawings are absolutely unique," he said. "Many of the typescript poems include significant holograph revisions. The typescript of 'Halt in Wilderness' is something quite special. They're all great things—in open market they would have sold briskly at double the price or more, and buyers would have been ecstatic."

Although many of Brodsky's friends in Cold War Russia hoarded his work—"all had the feeling Brodsky's work could be lost at any minute," said Wronoski—most collections don't have the range of drawings and poetry this one has. Many Brodsky collections have since been snapped up by the National Library of Russia in St. Petersburg or Yale's Beinecke Library, which has a major collection of Brodsky's papers, as well as those of his friends Venclova and Nobel poet Czeslaw Milosz.

Two boxes weighing nearly a hundred pounds arrived at Green Library at the end of May. To see the same photos and drawings again seemed little short of a miracle. There was more than I'd held on my lap in Vilnius—I don't recall seeing the 900-page samizdat edition of Brodsky's complete poems prior to his exile, compiled and annotated by Vladimir Maramzin. (He was sentenced to a labor camp for his literary labors, after his home was searched and his own editions confiscated.) Like all samizdat, they were typed four or five at a time—although the editions are rare, they're not unique. The collection also includes Brodsky's own typed account of his dealings with the Soviet emigration department, and his letter to Leonid Brezhnev.

Clearly, the meticulous, carefully documented Katilius archive is a labor of love—but the labor and the love went both ways, for Brodsky's link to Lithuania inspired a cycle of poems, including "Lithuanian Divertissement" (1971) and "Lithuanian Nocturne" (1974), both dedicated to Venclova, the young poet he met in the Katilius apartment during that first stay.

Late Lithuanian dusk.
Folk are scuffling from churches protecting the commas
of their candle flames in trembling brackets of hands . . .
snow's aswirl like the ashes from burnt-out celestial wards.

Venclova was among the first to recognize Brodsky's genius. A touch of it will soon be shared with visitors to the Stanford Libraries.

Cynthia Haven, a visiting scholar, was formerly the associate director of communications for the Stanford Libraries. She is the editor of Joseph Brodsky: Conversations.