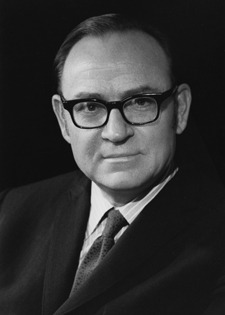 As president of Ford Motor Company in the 1960s, Arjay Miller saw firsthand the devastation of social unrest and inequality in Detroit. His experiences during the turbulent era kindled a lifelong passion to develop leaders who would value the common good. Miller’s efforts shaped Stanford’s Graduate School of Business and continue to influence generations of business leaders.

Miller was born in 1916 to a farming family in Shelby, Neb. He earned his bachelor’s degree from UCLA in 1937. In 1940, he married Frances Fearing; their marriage lasted 70 years, until her death in 2010. World War II interrupted his doctoral studies at UC-Berkeley. He was drafted into the U.S. Army Air Forces.

When the war ended, Miller became part of the Whiz Kids, a cohort of 10 World War II veterans who banded together during wartime, and as a group, later saved the ailing Ford Motor Company. As Miller and his colleagues transformed the company, he learned about management and developing business leaders. He eventually rose to be president at Ford, during a time when Ralph Nader brought to light concerns about auto safety and called on automotive industry executives, including Miller, to testify before Congress.

“In his mind, there was not a line in the sand between the two,” says Bernadette Clavier, director of the Center for Social Innovation. “He believed we could engineer a workplace that works in harmony instead of opposition with what is good for society.”

One example is the Embrace, says GSB professor Neil Malhotra, MA ’05, PhD ’08, the faculty director at the Center for Social Innovation. This low-cost warmer is keeping vulnerable infants alive in developing countries, where life-saving incubators are often out of reach. The class in which it was developed, Design for Extreme Affordability, “was tied to [Miller’s] legacy,” Malhotra says.

The Public Management Program was only one of Miller’s many accomplishments as dean. He expanded the endowment, hired more women faculty members and diversified the student body. “He took a school that was already in a very good position and moved it dramatically forward,” says James VanHorne, professor emeritus at the GSB.

Miller is survived by his son, Ken, and daughter, Ann; three grandchildren; and six great-grandchildren.