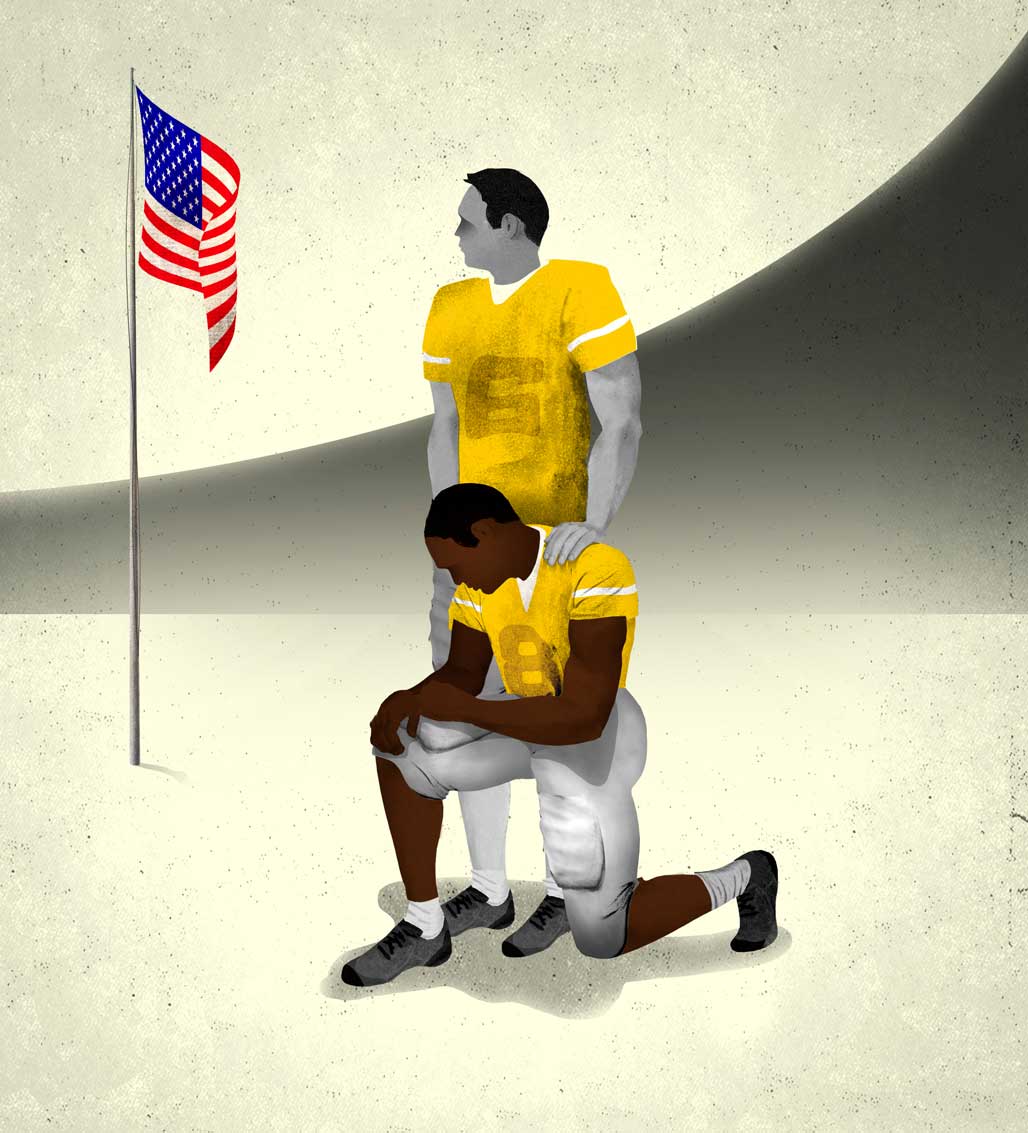 Editor’s Note: Debate continues to swirl around protests by some NFL players during the playing of the national anthem as a way to draw attention to racial injustice. We asked two writers to provide different perspectives about the issue. One interviewed two NFL players who are Stanford alumni. The other is an undergraduate who opposes the protests.

As a sportswriter for the Washington Post in 1983, I watched the Georgetown University basketball star Patrick Ewing step into a racial storm. During pregame introductions in Philadelphia, Villanova University fans unfurled a banner that read, “Ewing Is An Ape.” As Ewing, a Jamaican, walked onto the court, someone threw a banana peel that landed at his feet. In my Stanford seminar on sports journalism over the past dozen years, we have talked about that moment, one of many in American history when race, culture, politics and sports intersected.

I’ve spent the past three years interviewing Bob Cousy, Hall of Fame captain and point guard of the Boston Celtics during the 1950s and ’60s, part of a dynasty that won 11 NBA championships in 13 seasons. Now a 90-year-old widower living alone in Worcester, Mass., Cousy is coming to terms with his life, and reconsidering how he dealt with race. Though long respected by the league’s pioneering black players, Cousy regrets he didn’t do more for Bill Russell, his teammate and five-time MVP, who encountered virulent racism in Boston and around the league. Vandals once broke into Russell’s home and defecated on his bed.

If only, Cousy says, he had spoken out publicly in support of Russell. Instead, he remained silent rather than risk his reputation and livelihood in Boston, a city with a fraught racial history. It’s a risk that Cousy now believes he should have taken. “I might have been able to neutralize some of this,” he says, “if I had been more outspoken.”

History gives us scintillating examples of those who risked financial security, reputation and sometimes physical safety in answer to a moral imperative: the Founding Fathers, the Rev. Martin Luther King Jr. and, more recently, the women of the #MeToo movement.

In the past 2½ seasons, following the lead of former San Francisco 49ers quarterback Colin Kaepernick, dozens of the NFL’s African-American players have protested police brutality and racial injustice by taking a knee during the national anthem, by raising a fist or by remaining in the locker room until the anthem was done. But few white players have spoken out in support.

Not everyone believes athletes ought to take political action, but Nike’s Kaepernick ad campaign (“Believe in something, even if it means sacrificing everything”) speaks more of conscience.

I reached out to two of my former Stanford students playing in the NFL, Richard Sherman, ’10, and Coby Fleener, ’11, MA ’12, for their thoughts on today’s racial storm. Allow a teacher to confess pride in these thoughtful family men, both 30 years old. Sherman is an African-American cornerback with the 49ers, a four-time Pro Bowler. Fleener is white, a tight end from Lemont, Ill., who caught more than 250 passes in six NFL seasons; his pro career likely ended when New Orleans released him this year.

As students in my seminars, Fleener and Sherman were engaging. Reading John McPhee’s Levels of the Game, we discussed McPhee’s premise that biography and basic nature shape an athlete’s performance. That resonated with Sherman. He spoke about having grown up in Compton, Calif., amid gang violence. While in high school, he said, his best friend was shot dead. Sherman, who played wide receiver for Stanford, told us his dream was to play in the NFL; he said he played with greater risk than most, exposing himself to dangerous hits as he crossed the middle and leaped to make catches, because if he didn’t impress NFL scouts, he would return home to an uncertain future. This was a powerful moment: a student sharing with the class an important piece of his biography.

When conscience comes into conflict with the wallet in American life, conscience rarely wins—especially in the NFL. Most players avoid the controversy of political dissent. In the league today, about 70 percent of the players are black, the average career lasts less than four seasons and many contracts are not guaranteed. Every player’s livelihood is at risk daily, certainly from injury, and perhaps from a team owner’s politics.

Fleener posits a thought experiment: 'if these players were protesting the treatment of our military men and women when they returned from deployment, what would the reaction be?'

It may not be only philosophical differences that make owners disinclined to support the protests, but also bottom-line pragmatism: They don’t want to alienate their mostly white fan base. Fleener told me many people believe “the false narrative that these guys are protesting the flag or the military. It’s sad that [narrative] even exists.”

Fleener posits a thought experiment: “If these players were protesting the treatment of our military men and women when they returned from deployment, what would the reaction be?” When I pose that question to Sherman, he replies: “Indifference.” The public reaction to the current NFL protests has been intense, Sherman says, “because this is African-Americans trying to flex power, and that’s not a good thing ever in this society.”

Privately, Sherman has heard free agents say NFL teams warned them, “If you are going to protest, we are not going to sign you.” Fleener says NFL teams, as a matter of course, firmly impress upon players, “This is the lane you stay in.”

Politics drew Fleener into the protests in September 2017 after President Trump said at a rally, “Wouldn’t you love to see one of these NFL owners, when somebody disrespects our flag, to say, ‘Get that son of a bitch off the field right now, out. He’s fired. He’s fired!’ ” Two days later, as 10 of his African-American teammates sat on the Saints bench in protest during the anthem, Fleener placed his hand on the shoulder of a protester. He says he felt he had to do something in response to the president’s statement. I ask Fleener what he might say if, years from now, someone asks him what he did during the NFL protests. “Oh boy,” he replies, dread in his voice. “Probably not enough.”

Sherman says it “would mean a great deal” if more white players took part in the protests or spoke out in support of them. “More white people in general would look at it differently if you saw Tom Brady saying something about it in a positive manner,” he says. He understands the silence: “It’s not an issue that hits close to home for a lot of [white players]. It’s different relating to a teammate and really embracing their struggle.”

A leader in the NFL players association, Sherman endorses the protests but has not participated in them. “Would that be more impactful,” he says he asked himself, “than my voice and than me going out there and actually helping people?” Sherman’s foundation has donated hundreds of thousands of dollars’ worth of computers, backpacks and school supplies in low-income areas, “just to even the playing fields a bit with those communities.” Sherman is among the players actively engaged in conversations about what to do next—how to prompt constructive societal change and improved police relations with people of color.

He understands an NFL player’s need to protect his job: “This is your livelihood. You’ve got to feed your family,” he says. But he also believes a player who supports the protests but doesn’t act on his conviction is apt to suffer a Cousy-like regret: “I think that this moment we are in—with all of this turmoil and sensationalizing headlines really starting to segregate our society again—I think they will understand that they missed the moment where they could have brought people together. They could have helped to do something that was bigger than themselves.

“It’s not selfish to say nothing because it’s not their obligation. But they possess the ability to go beyond the sport, and to really make an impact that is greater than just throwing a football.”

Gary M. Pomerantz lectures in Stanford’s Graduate Program in Journalism. His sixth and newest nonfiction book, The Last Pass: Cousy, Russell, the Celtics, and What Matters in the End, was published on October 23 by Penguin Press.

Read the related article: The Protesters' Aims Are Noble; Their Protests Are Not

Dishonoring a symbol of unity does nothing to advance the cause.