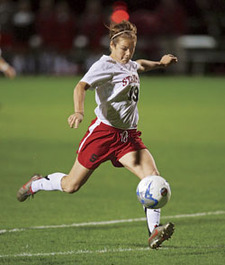 As she streaked toward the goal with the ball, sophomore forward Kelley O’Hara suddenly found herself tumbling onto the grass, grabbed from behind—by her shorts—by a Notre Dame player.

“She was probably told to do whatever she could,” O’Hara says about the play, which drew a warning yellow card for second-ranked Notre Dame in the Santa Clara University/adidas Classic. “But if you get tackled and you go down, you never let them know it bothers you. You get back up and just kind of laugh it off, which drives them crazy.”

“Right,” says team co-captain Rachel Buehler. “You don’t let them get in your head, and you don’t let it turn into a fistfight. We just want to play soccer.”

As the Cardinal (9-1-1), ranked No. 1 by both the National Soccer Coaches Association of America/adidas poll and Soccer Times, opened the season with its best start in five years, players were adjusting to the targets newly painted on their backs and facing increasingly physical opponents. “Teams are out to get us now, and they’ll come out strong,” O’Hara says. “But that will just give us a good game every time we play.”

O’Hara, who led the scoring last season with nine goals and contributed three in the first month of play this year, is part of the dynamic six-member sophomore contingent. “They are an amazing, stellar class,” says senior center back Buehler, who anchors the de­fense, braid flying, with gravity-defying air skills. “They’ve brought a new element our team hasn’t had in the past—they are really fast, really athletic goal scorers, and they all have great attitudes.”

The team that graduated only one senior last season this year added four freshmen who saw significant minutes early in the season. There have been four goals from Morgan Redman and three from Christen Press, four saves for goalie Kira Maker in her debut against Rutgers, and midfielder Allison McCann has played in every game. All that success, in spite of missing a key player—sophomore forward Ali Riley, who was a starter on the New Zealand team at the Women’s World Cup in China.

Head coach Paul Ratcliffe says Riley, O’Hara and Buehler are evidence of the growing prominence of soccer nationwide. “Players are developing at a younger age, getting better coaching and getting more skillful, so the level of play is increasing. The talent is fantastic out there.”

And they know each other’s moves from competing together for years on youth national teams. A “typical Buehler move,” O’Hara says, came in the second half of the Notre Dame game, when the senior defender slid into a block, rolled onto her back and still managed to clear the goal with a strong kick. “She’s honestly the best defender in college soccer. I’m not kidding. It’s ridiculous.”

Over the summer, Buehler led the under-21 U.S. team to a gold medal at the Nordic Cup in Finland, while O’Hara was gunning for silver with the under-20 national team at the Pan Am Games in Brazil. Both soccer players started young—O’Hara at age 4, “playing muppet soccer for oranges and juice boxes”—and both sets of parents have been supportive without being gung-ho. Because O’Hara’s father is a pilot for Delta Air Lines, her folks get to most games, and another regular cheerleader in the bleachers is Buehler’s father, Donald, ’64, who played water polo and wrestled for Stanford. “I can always hear my mom’s voice,” Buehler adds, remembering the time in elementary school when her mother coached one of her teams, although she’d never played soccer herself. “It was pretty funny because she’d clap and go, ‘Good job, girls. Kick it.’”

The Cardinal women last made it to the NCAA Final Four in 1993, but players and coach say their prospects are looking good this season. “I think we’re very strong on defense, with a quality midfield, and our attack is very potent as well,” Ratcliffe adds. “Hopefully, they’ll have the confidence and the belief, and they’ll put in the hours to make this a dream come true.”