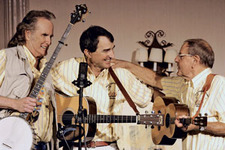 Today, Overly counts among his most treasured Trio memories the times he's played alongside them. He has spent six summers jamming with his idols at the their annual fantasy camp in Scottsdale, Ariz. For Overly, it's nothing short of a dream come true. “The thing that is so cool is not only are you onstage with your musical heroes, you're doing it the way they did it—in front of an audience,” Overly says.

Overly took his first guitar lesson at 15. Though music was a passion, he rarely played in public and was shy before a crowd. “At Stanford, I wasn't somebody who jammed,” he recalls. He married Monica Murakami, '73, and went to work as an engineer for Acurex, a government energy contractor. After he retired in 1991, he and Monica moved with their daughters, Andrea, MA '06, and Shannon, '02, MS '03, from Woodside, Calif., to Jackson Hole, Wyo. In 2002, he purchased a banjo from former Kingston Trio member John Stewart on eBay. Stewart called him afterward to thank him for the purchase, and invited him to camp. “You don't say no to John Stewart,” Overly says.

That's how an engineer from Wyoming became friends with Stewart and with Bob Shane and Nick Reynolds, the group's surviving original members. (Dave Guard, '56, left the band in 1961. He died in 1991.) Stewart founded the Trio Fantasy Camp in 2000. Campers spend three days in music workshops with Stewart and Reynolds. On the final night, participants join the two onstage to perform before a paying audience of about 250 people. Shane also sings a few songs with his former bandmates.

Overly has matured noticeably as a musician since his first camp, Shane says. When he started, “he didn't really know much about singing and playing, and now he sings and plays beautifully,” says Shane. Overly has twice been named Camper of the Year, an honor usually reserved for the most-improved camper. Performing with the men who created the music that shaped him still fills Overly with awe. “These are things you never think you'll do in a million years.”