"For Love of Country"

Veteran's Day is intended as a national day of recognition for those who have served in the U.S. armed forces. But to many Americans, veterans are all but invisible. A day in their honor becomes a moment of cursory thanks for a sliver of society quickly forgotten again.

Less than 1 percent of Americans have served abroad in the military since 9/11, despite more than a decade of war, according to a new book by Washington Post journalist Rajiv Chandrasekaran, '94, and Starbucks CEO Howard Schultz. The absence of a draft has in part led to a society largely—and disconcertingly—disconnected from the citizens it has sent to fight, Chandrasekaran says.

For Love of Country is their attempt to help bridge the gap, with portrayals of the motivations, sacrifices and strengths of veterans like Bill Krissoff, a 60-year-old surgeon who fought age limits to join the Navy after one of his sons, a Marine lieutenant, was killed in Iraq; and David Oclander, a former lieutenant colonel who turned down a lucrative post-military consulting career to help inner-city schoolkids in Chicago.

It's to try to spark a national conversation about our veterans," Chandrasekaran says. "It's to get people in society who have tuned out to spend a few minutes tuning in."

Proceeds from For Love of Country will benefit Onward Veterans, a donor-advised fund of the Schultz Family Foundation to support military veterans and their families.

INTERVIEW HAS BEEN EDITED AND CONDENSED

Q. This is a departure from your prior books, Little America and Imperial Life in the Emerald City, which have skewered the absurdities of American policy in Iraq and Afghanistan. Here you're in praise of those carrying out the polices.

There was something important in illuminating the failures in the early years of the Iraq War and in the surge years in Afghanistan. I spent a lot of time writing about things going wrong. Part of this is perhaps a result of those projects, where I came away feeling here were a lot of good people screwed by bad decisions in Washington. I wanted to give voice to the brave men and women who went and selflessly served, who were doing what was asked of them and then some.

After writing two books about failure, as an author, it's refreshing to write about heroism. I don't want to be the guy who always writes about things going wrong.

Q. The book begins with Howard Schultz, your co-author, admitting his lifelong lack of contact with members of military. He'd never talked with someone in uniform. As a war reporter, you had a different experience. But what about growing up?

The military—I'll be honest with you—was a nonexistent part of my life prior to my becoming a foreign correspondent for the Washington Post. During my college career, I didn't know anybody who served, and even when I started out at the newspaper, the stories I was covering didn't have much of a connection to foreign policy or national security issues. I just didn't think about it.

Q. Is there a moment you can identify when you started to view the members of the military in a more personal way?

Probably in early 2004, during the first U.S. Marine operation to retake Fallujah. I was essentially in Fallujah for a couple of weeks with a battalion of U.S. Marines, and there was downtime when I just sat around and talked to the young men who were serving. And I recall sort of having an epiphany—“I am halfway around the world covering a war, and yet in some ways I am traveling to parts of America I have never visited."

I was just sort of struck by the broad cross-section of Americans from fundamentally different walks of life who came together and served shoulder to shoulder. I had that experience multiple times in the following years in the presence of soldiers and Marines in Iraq and Afghanistan. It was a window into our society the likes of which a guy who grew up in Northern California, went to school at Stanford and then moved out to Washington, D.C., didn't get.

Q. What misperceptions about the military did you then find yourself encountering in others?

One I'd hear from people all the time is that soldiers and Marines enlisted because they couldn't get a job, or . . . they couldn't pay for college. Yeah, there are many who join for bonuses, or because of financial pressures, or to avail themselves of the GI Bill. But many, many others join because they see it as a personal calling, a family tradition, or are motivated by a sense of duty or patriotism. It's not just people who went into the recruiting office because they felt they had no other options. 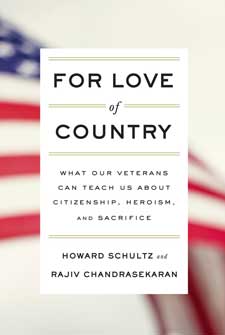 Q. How did this book come about?

Having spent two and a half years in Iraq and parts of three and a half years in Afghanistan, I had a good sense of what our men and women in uniform were doing in war zones. But I wasn't as connected to their experience coming home until last year, when I started to work on a project for the Washington Post, a landmark survey of the post-9/11 generation with the Kaiser Family Foundation. It was eye-opening for me—the challenges and also some of the remarkable successes [veterans] were having.

Then came a chance meeting with Howard and his passion for wanting to do something significant in this space. It was just a very fortuitous pairing where I had this ground-level expertise and a real desire to tell some of these stories, and here was the chief executive of a large American company with a very broad retail presence who wanted to join in.

Q. Your book says 55 percent of veterans feel disconnected from civilian life in America. What are your concerns about this disconnect between civilians and veterans?

We are at this remarkable time in our history where we have gone to war twice with an all-volunteer force. That really hasn't happened in our country.

We face a raft of challenges in helping to take care of these people who have served. If the rest of the country is so disconnected from who they are, what they did, what they are doing now, that's a fundamentally dangerous thing for our society. It risks breaking the solemn obligations that we have made to our veterans, the promises we have made to them. It's just not healthy for our society to be so disconnected from those who protect it.

The military doesn't do itself a lot of favors, either. The largest purveyor of gated communities in our country is the U.S. Army. They build these giant bases where active-duty personnel live and work, and limit interaction with the broader civilian population of our country. Both sides need to do more.

Q. Do you see a return to the draft or to required national service as a solution?

No. What it leads me to say is that those who have chosen not to serve have an obligation to spend a little time learning about, thinking about, and engaging with those who have served. That's sort of why we've written this book.

Q. The book's release is tied to Veterans Day. How do you acknowledge the day?

For me, it doesn't involve, for instance, going to a cemetery or participating in a parade. It's more of a personal thing where I try to take the time to write some thoughtful notes to people I know who have devoted their lives to the service of our nation.

If you want to understand how the world works, you have to get out into it.

Even the best lines can't guarantee you'll get the girl.