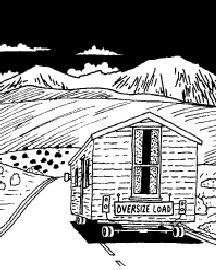 The trailer wasn’t much to look at. It was a white single-wide, dented and sun-scorched, with a door of splintered plywood and drapes the color of an Ace bandage. Between the window glass and the screens, the wooden sills looked soft and shreddy, like juniper bark.

After working in Durango, Colo., that summer, I’d moved west, to Utah, to the small town of Blanding, to start my next contract job, cataloging archaeological records at Edge of the Cedars State Park Museum. The job came with housing—the little trailer across the street from the museum. I showed up at the end of August, in a thunderstorm, my Cherokee loaded with what I’d decided were the essentials in a new, nomadic life. Everything else was in storage.

In Blanding, lessons in migration were all around me. Behind the museum were the ruins of a 13th-century pueblo. Almost anywhere I went hiking I could find a scatter of chert flakes or a small gray potsherd. In the 1880s the first ranchers in that part of Utah found cliff dwellings furnished with pottery and implements in good repair. In one place, I’d read, there was food in the bowls. Why did the residents walk away from the stone houses in the beautiful canyons? Climate change, perhaps, or conflict, or some combination of factors. Whatever the reason, it was time to go.

My trailer said stay. I grew to love its patchwork surfaces, its scalloped molding and “wood” paneling. It was quiet and mouse-free, and there weren’t any neighbors. It felt like the home I didn’t know I’d been looking for.

Blanding is on White Mesa—a high plateau, 6,000 feet—and the trailer had the best view in town. It look-ed to the west, past layers of cinnamon-colored earth and dusty sage, past the glint of a barn roof and the curve of dirt and gravel that was the Westwater Road, to distant canyons. A diamond-shaped pane of glass in the door framed the gently rounded peaks of the Abajos to the north.

Once in a while, when a gust of wind slid under the roof, the trailer would sigh and whine like a tied-up dog. But most of the time we were content, the trailer and I, reading or cooking or just looking out at our view. I bought plaid curtains and some cotton throw rugs at the Dollar Store, and the trailer seemed to be happy.

At Stanford, I’d spent the summer of 1986 in one of the “temporary” Manzanita trailers, ensconced in a vinyl armchair, reading Proust and keeping a wary eye on a patch of fungus that was growing on the ceiling. Looking back, it was an enchanted time. Having so much time was the enchantment. Was that when my fondness for trailers took root?

In Blanding, a series of storms blew us from summer into fall. The trailer was warm and dry but thin-walled, and it did not hide the strength of storms. We had a hailstorm, like the clash of medieval armies, countless stones clattering on metal. We had a windstorm. Horses galloped across the roof. I fell asleep to the scouring of the wind and the agitation of the trailer, a lifting of metal like wings.

Later that fall, by chance, I learned the provenance of my trailer. It had come to Blanding as park service surplus, having served out its working life at one of the canyon country parks, Canyonlands or Natural Bridges. The trailer had been places, and it gave me the feeling that it might pick up and go again, when it wanted. It has wilderness in its bones.

You can have your lawn and your picket fence. I’ll take a yard full of sagebrush and an old singlewide that remembers canyons.

ERICA OLSEN, ’88, is a freelance writer and an archivist who has returned to her Blanding dream house on several occasions.