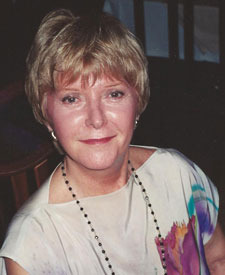 While a doctoral student at Stanford, Paula Hays Harper spent a year in Los Angeles as the art historian for the first-of-its-kind feminist art program at the California Institute for the Arts (CalArts), founded by Judy Chicago and Miriam Shapiro. There in the early '70s she helped conceptualize Womanhouse, an installation/performance space that has been called "the cradle of feminist art."

"The idea was conceived to get a house—that place where women had traditionally directed so much of their creative energies—and transform it into an expressive total work of art," Harper said in a 2010 video produced by the University of Miami, where she taught contemporary art from 1983 until her retirement last year.

Harper, PhD '76, died June 3 in Miami from complications of a rare skin cancer. She was 81.

An only child, Paula Fish was born in Massachusetts and grew up in Philadelphia. In her 20s she moved to Manhattan where she danced with the Munt-Brooks modern dance company. Marrying and divorcing twice, she never had children but kept the names of her former husbands. After a dance injury, Harper delved into the world of art, earning a bachelor's degree and a master's in art history at Hunter College in New York.

While working as a visiting professor at Mills College in Oakland in the early '80s, Harper became close friends with San Francisco-based author and former journalist Judith Robinson. "When she was looking for a professorship, the University of Miami offered to hire her. Paula had her sights set high and thought Miami a cultural backwater," Robinson recalls. "I urged her to go look at it anyway, suggesting that there was more in Florida than flamingos! She made a full and rich life in Florida with her talents and knowledge that enhanced the worlds in which she lived."

Harper became a prominent figure in the burgeoning art world in Miami, helping transform it into a global destination for modern art. As an art critic, she was a regular contributor to The Miami News and Art in America. She was an expert on the work of the artist Christo, known for his large-scale fabric-wrapped sculptures, and collaborated with Ralph E. Shikes on a comprehensive biography of the 19th-century French Impressionist Camille Pissarro.

She is survived by many friends and colleagues.