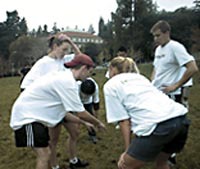 On November 22, Trent Edwards and Kai Yu will take to the field at Stanford and face off against their rivals from Cal. Both men hope to bring home the coveted Axe.

But the similarities end there. Edwards, ’06, Stanford’s quarterback, will be in a stadium packed with thousands of the Cardinal faithful for Big Game. Yu, ’04, a member of the engineering honor society Tau Beta Pi, will play touch football on a dormitory field against the society’s Berkeley chapter in the “Little Big Game.”

Truth be told, though, it’s far from a hard-core sporting event. The 2002 game started about an hour late, leaving little time to play before the real Big Game began. Crowds of alumni poured onto the field Tau Beta Pi members were expecting to use, so they ended up on a nearby plot of grass that wasn’t exactly a level playing field. “Half of the time we were playing uphill,” Yu remembers.

Some years, the Cardinal has had to borrow players from the Bears to field a full team. Stanford lost last year, 28-21.

Of course, the football game isn’t the real lure of joining Tau Beta Pi. Seniors in the top 20 percent of their class are eligible. A smaller coterie of juniors are offered membership as well. Candidates become members by participating in panel discussions, tutoring and social gatherings. Many join to network with people outside their own department. “I wanted the opportunity to meet some of the brightest people from other majors,” says Yu, an electrical engineering major.

That’s most of the point behind the Little Big Game, too—to meet fellow engineers. For now, the mini Axe remains at Cal, in the chapter office. “There won’t be some sort of thieving attempt on it, will there?” asks Berkeley’s chapter president, Brian Love. It seems that when it comes to the Big—or Little Big—Game, some things never change.

Telling Tales Out of School

Retired but never retiring, Diane Middlebrook turns full attention to writing biography. As in the classroom, she packs a punch.