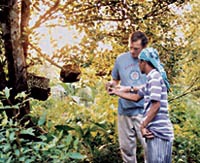 You can taste his passion: the sweetness of cinnamon, the fire of ginger, the earthiness of coffee, the soft bite of white pepper.

Slogging through mud in the Guatemalan highlands, Thomas Fricke eyes a perfect place to grow organic vanilla. It is a once-vital tropical forest, now denuded by slash-and-burn farming but untouched by synthetic chemicals. His plan: introduce the lucrative and sustainable crop to the local Maya, who can revitalize the habitat by planting trees to support and shade the climbing vanilla plant.

Fricke is president of ForesTrade, importing organic spices, coffees and essential oils through joint ventures with independent growers. He started the company eight years ago with his wife, Sylvia Blanchet, who serves as vice president.

From patchouli leaves harvested by the Mentawai of Indonesia, who wear flowers in their hair to appease the plant spirits, to the vanilla tended by former Guatemalan guerrillas, each product reflects a strategy based on environmental sustainability, cultural respect and social responsibility. That mix drew a Business Award for Sustainable Development Partnerships at the 2002 U.N. World Summit, where ForesTrade was the only U.S. firm to receive the honor.

The company, based in Brattleboro, Vt., has approximately 70,000 growers in Indonesia, Guatemala and Grenada. With more than 100 wholesale buyers, including Ben and Jerry’s, Peet’s Coffee and Tazo Tea, sales have been growing by more than 30 percent a year, exceeding $9 million in 2003, Fricke says.

While demand for organic fruits and vegetables has skyrocketed, few importers sell certified organic spices. “We’re a large fish in a small pond,” Fricke says. “I hope to be an inspiration to other companies, to show that organic works.”

The son of German Jewish refugees from East Berlin who immigrated to California when he was 8, Fricke crafted his own major in urban design and architecture and lived at Jordan House, a hotbed of campus activism at the time. When housemates went on to become doctors and lawyers, he stayed with the issues that stirred him in the ’70s: sustainable development and rainforest preservation. At a 20th-anniversary celebration of the former co-op, friends voted him “most unchanged.”

After graduating, he consulted for the World Bank, directed Harvard’s Cultural Survival Southeast Asia program and advised the World Wildlife Fund in Sumatra. Frustrated with the “short-term nature and sustainability problems” of nonprofit efforts in Sumatra, he decided to approach preservation from the business side.

An international spice trader has to be part Marco Polo, part Indiana Jones and part Dale Carnegie, Fricke says. “You must chart courses through remote regions, constantly practice personal diplomacy and dodge dangers real and imaginary. I relish riding the waves in a rickety fishing boat in search of sustainably harvested cloves.” For the purveyor of flavors, life is seldom bland.

What Owls Teach Us About Stroke Rehabilitation