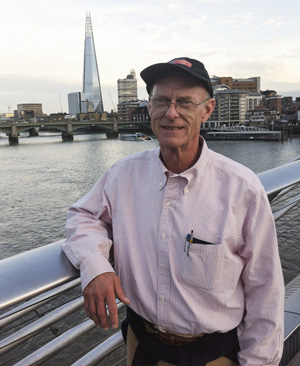 David R. Boggs, MS ’73, PhD ’82, died on February 19 of heart failure at Stanford Hospital, according to his wife, Marcia Bush. She and his older brother, Walter, are his only immediate survivors. He was 71.

Boggs’s name appears alongside those of other Ethernet pioneers, like Vinton Cerf, ’65, and Bob Metcalfe, on a plaque and an exhibit at the Jen-Hsun Huang Engineering Center in Stanford’s Science and Engineering Quad.

Boggs was among the Stanford grad students who worked on futuristic projects at Palo Alto’s Xerox PARC, where academics, scientists and engineers mingled in creative ferment. One day in early 1973, he was in the basement of Building 34 configuring some Nova 800 minicomputers the size of a microwave oven when he offered to help researcher Metcalfe, who was struggling with an oscilloscope and a coaxial cable while seeking to send pulses down the wire.

“Dave had been putting connectors on coaxial cable for years. He did not draw blood,” Metcalfe reminisced. “Boggs and I were inseparable for the next two years.” Together, the Boggsy Twins, as some called them, built the first Ethernet.

Over the course of his career, Boggs worked as a researcher at PARC and at Digital Equipment Corp. before founding the Ethernet company LAN Media. Little by little, Ethernet became the primary way to construct networks in office buildings and, later, homes.

During his student days, Boggs joined the Stanford Amateur Radio Club. His experiences as a radio operator helped him envision connections between radio broadcasting technology and Metcalfe’s theoretical work. Ethernet arose from the over-the-air packet radio technology that powered ALOHAnet, a wireless networking system developed at the University of Hawaii with which Boggs and Metcalfe were familiar, according to David Leeson, PhD ’62, an adjunct professor of electrical engineering at Stanford and the club’s current faculty adviser.

As a ham radio operator who has died, Boggs now qualifies for SK or silent key status, says Stanford electrical engineering professor Thomas Lee. “Ethernet has had tremendous knock-on effects,” he says. “And Boggs is a hero insufficiently sung.”

Book Review: Whose Web Is It Anyway?

30 years after stumbling through a lost academic quarter, I officially graduated from Stanford University.