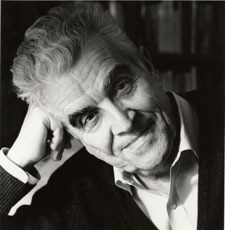 A French scholar who explored history, sociology, philosophy, religion and psychology during his long career, René Girard was primarily interested in human conflict and its root causes. The author of nearly 30 books, Girard was the Andrew B. Hammond Professor of French Language, Literature and Civilization, emeritus, at Stanford, a member of the prestigious Académie Française, and the recipient in 2008 of a lifetime achievement award from the Modern Language Association.

Girard died at his home in Stanford on November 4, following a long illness. He was 91.

Born in Avignon, France, Girard attended the École Nationale des Chartes, graduating with a degree in medieval studies in 1947. On a whim, he took a position in the French department at Indiana U., where he earned a doctorate in history. He also taught at Duke, Bryn Mawr, Johns Hopkins and what is currently the State U. of New York at Buffalo before arriving at Stanford in 1981. He retired in 1995.

Girard’s first book, Deceit, Desire and the Novel (published in French in 1961; the English edition followed in 1966), introduced his theory that human motivation is based on desire, and our desires are based upon what others want, emphasizing the role of imitation in our lives. In developing his theory of mimetic desire, he argued that human conflict results not from our differences but rather from our sameness. As people seek what others want, these competing desires lead to rivalry, jealousy and violence. In a 2010 article in the Guardian, writer Andrew Gallix said that discovering Girard’s book was like “putting on a pair of glasses and seeing the world come into focus.”

In his final book, Achever Clausewitz, published in English in 2010 as Battling to the End: Politics, War and Apocalypse, Girard warned that mimetic competition among nations could eventually lead to mutual self-destruction unless they learned to renounce violence and approach their neighbors in peace.

Cynthia Haven recently completed a biography of Girard as a visiting scholar in Stanford’s Division of Literature, Cultures and Languages. She said, “At a time when our thinking has become much more tribal and parochial, despite our constant chatter about globalization, at a time when people are focused on selfies and self-improvement, René took on, once again, the grand récit. He was interested in human history, human civilization and human destiny. His questions were big ones: What is the cause of human strife; what are the roots of human violence? Why do we desire what we do? The answers he found were plausible and persuasive, and he set them out in a body of work that extended over the whole of his lifetime.”

Girard is survived by his wife of 64 years, Martha McCullough; children, Mary Girard Brown, Martin and Daniel; and nine grandchildren.