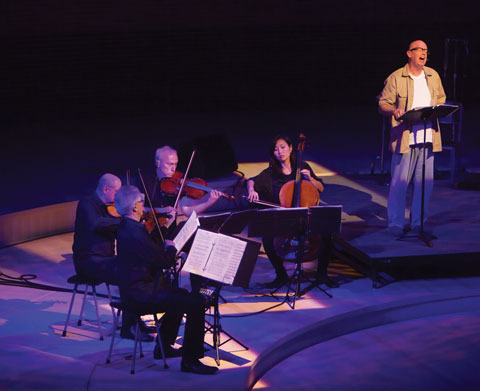 In Jonathan Berger’s world, everything is music. When zeros and ones zip through his computer, he hears melodies. A swinging golf club sings. War and cancer evoke minor keys.

For Berger, DMA ’82, a composer and Stanford professor, music isn’t just his creative medium. It’s his tool for understanding and interpreting both human experience and the human brain. His work ranges from operas inspired by emotional moments to research into the neuroscientific and computational aspects of sound.

At times, art and science intersect in his compositions. On the day that Berger’s mother, bedridden with dementia, didn’t recognize Berger’s brother Michael, she hummed a tune instead of saying his name. Berger transcribed it and after some digging discovered the song had topped the charts the week of Michael’s birth. He memorialized that experience in Memory Slips, a piano trio dedicated to his mother. 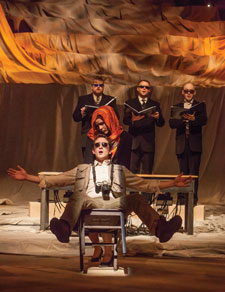 Berger’s latest work, the string quartet-cum-opera My Lai, honors a decades-old memory that still catches in Berger’s throat. He was in high school when he first heard the story of Hugh Thompson Jr., the American helicopter pilot who was unable to prevent fellow soldiers from massacring villagers during the Vietnam War. Berger remembers being struck by how young the soldiers were. “You know, I walk into my freshman class, and I look at them and I say, ‘They were your age when they were doing this.’ ”

My Lai explores heroism, redemption and betrayal from Thompson’s perspective. Written for the Kronos Quartet, tenor Rinde Eckert and Vietnamese multi-instrumentalist Vân-Ánh Võ, the work combines traditional string orchestration with electronically processed sounds and an array of Vietnamese folk instruments constructed from mortar shells, bamboo spikes and other wartime leftovers. Berger describes it as an “orchestra of weapons.”

My Lai was first performed at Bing Concert Hall and had its world premiere at Chicago’s Harris Theatre in January. The Chicago Tribune called it a “gripping monodrama” containing “growly thickets of notes, pages of anguished arpeggios and contrasting stretches of elegiac calm to relieve the pervasive agitation, despair and dread.” Berger was thrilled with the performance. “There was this wonderful moment of absolute silence at the end of the piece,” he says, “which to me is the best review I can get.”

When the 18-year-old Berger knocked on the door of a Jerusalem conservatory in 1972, he didn’t know how to read music—he’d learned guitar by ear—and failed his audition but got in on the strength of his intellect. He’d dropped out of SUNY-Buffalo, seduced by the New and Newer Music concert series at New York City’s Lincoln Center, which introduced him to the likes of John Cage and Morton Feldman.

“Here was music that was out there, and exploratory, and doing crazy things and ripping shreds of paper on stage and making noises,” Berger recalls. That experience felt more important than school. After leaving Buffalo, he hopped a one-way flight to Rome and let his ears guide him through Europe, exploring the folk music of Italy, Yugoslavia and Greece. He eventually found his way to Jerusalem, where his parents had recently settled.

The sounds of the city overwhelmed and delighted Berger. “You hear everything at the same time,” he says—church bells, calls to prayer, vendors and bakers and tourists buzzing through the Old City’s narrow streets. “It’s a cacophony. It’s indescribable.”

Five years later, Berger had earned a degree in music theory and composition, experimenting with both traditional and electronic instruments, and married a classmate, Talya, MA ’81, now a senior lecturer in music at Stanford. After he received his master’s degree at the California Institute of the Arts and his doctorate, the couple joined the music faculty at Yale.

There, Berger met Yale mathematician Ronald Coifman, who told him about his recent commission from the FBI: compressing its growing database of fingerprints and making them searchable. Berger found himself drooling.

“These were incredibly musical questions,” Berger says matter-of-factly. “You can think about [each fingerprint] as a collection of sounds that needs to be categorized and notated.” He didn’t contribute to that work, but in a spin-off project, Berger and Coifman explored how sound could represent data.

So began a research partnership that continues today. They devised a means of compressing songs, creating an audio format that was eventually outstripped by MP3. They “sonified” photos of cancer cells so that malignancies could be identified by sharp sounds. They developed a reputation for de-noising old recordings, eventually restoring an 1889 recording of German composer Johannes Brahms performing his Hungarian Dances. 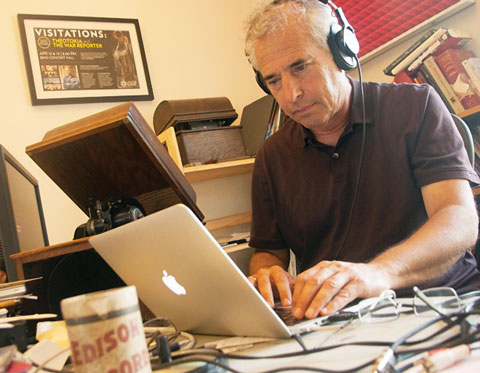 Berger also founded Yale’s Center for Studies in Music Technology—at that time the only place on campus where music, science and engineering coexisted. In the late ’90s, he returned to Stanford and its Center for Computer Research in Music and Acoustics.

Since then, Berger’s interests have moved into the study of music from the perspective of neuroscience and computation. Why do we tap our feet? he asks. And when we hear a scale, do-re-mi-fa-so-la-ti—why do we expect do to follow, and what do we feel when it doesn’t?

As he watched his daughters take up the cello, he grew fascinated with how they learned to hold the bow. At first, “they’re scratching away as 3-year-olds or 4-year-olds,” he says, “and they’re making these horrendous, awful sounds.” And then something happens: They slowly self-correct their hand positions based only on the sounds they hear. “I thought that in itself was magical,” he says. This process, in which abstract information is conveyed only by sound, is called auditory display. He wondered why we didn’t use our ears as learning tools more often.

Berger took auditory display to the golf course, where a good swing can be difficult to teach. Covering a golfer with sensors, he mapped out a “perfect” golf swing and assigned it the sound of a soprano singing laaaaa. Any deviation from that swing would distort the la into something uglier—a clear sign of a swing that needed work.

Says Coifman, “[Berger’s] defining characteristic is his curiosity and an ability to explore a field that’s completely unfamiliar.” To do that, Berger has to convince experts in other fields that he’s worth their time. “I’m good at asking questions,” he says. “And I’m good at getting really smart people to help me try to answer those questions.”

Kerry Klein is a freelance writer and radio producer based in Fresno, Calif.