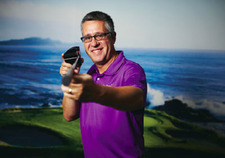 Jim Grundberg owns a tiny piece of sports history from his days at Stanford. When “the Play” took place—the Cal kickoff return that went through the Stanford Band for a touchdown on November 20, 1982—Grundberg was the student play-by-play announcer for KZSU. Looking back, he recalls confusion. “If I could have done it over again, I would have done it better.”

Today, Grundberg, ’83, shares ownership of another small part of the sports world—the SeeMore Putter Co., headquartered near Nashville, Tenn. Compared to golf’s biggest putter manufacturers, including former Grundberg employer Callaway, SeeMore is a boutique operation. But SeeMore has some history in its corner, too.

Grundberg and partner Jason Pouliot bought SeeMore in 2006. They sized up the company as underappreciated and under-managed despite a key asset: patented technology that gives the putters a unique sense of appeal. “This is really the type of thing that a marketer dreams about,” Grundberg says.

SeeMore is defined by its “riflescope technology.” The putters feature an elongated red dot situated between two “gun sight” white lines on the top of the club head. When a golfer takes the correct stance and aligns the putter so that the red dot is invisible behind the bottom portion of the shaft, the face of the club should end up square to the line of the putt.

Grundberg, 48, thinks that gives SeeMore an “original and different” identity in a culture of “sameness and interchangeable parts.” He also can point to the use of SeeMore putters in two memorable events: At the 1999 U.S. Open, the late Payne Stewart curled in a 20-footer on the final hole to defeat Phil Mickelson by a stroke; and in 2007 Zach Johnson torched the Augusta National greens during a 3-under-par final round to win the Masters. SeeMore is too small to sponsor any pros, but its putters get a measure of star power from their use by Johnson and a smattering of other well-known golfers, including Vaughn Taylor.

Stanford talked to Johnson a few days after he used his SeeMore to roll in a 10-foot birdie for a one-hole playoff victory at the Texas Open in May. Johnson said he shot a round of 61 eight years ago on just his third competitive outing with the putter. “It really hasn’t left the bag since.”

Johnson’s support notwithstanding, SeeMore is more a story of potential than results. The troubled national economy, Grundberg notes, has heightened the challenge of competing against big manufacturers. SeeMore, whose products range in price from $120 to $375, plans to ship 20,000 putters this year—1 percent of what Grundberg estimates will be a global market of 2 million putters in 2009. “We’re paying the bills,” he says.

Since 2007, the emphasis has been on stoking word-of-mouth credibility through so-called SeeMoreans—the most ardent consumers—and making contacts throughout the industry, particularly with younger golfers. “You have to have a cool factor,” says Pouliot.

Grundberg’s experience includes three years at Gibson Musical Instruments, where selling guitars brought lessons in coolness and celebrity power. That job came when he was honoring a noncompete agreement with Callaway, where he was the general manager for the Odyssey brand of putters. (Callaway bought Odyssey after Odyssey’s sales went from $3 million to $65 million in sales during Grundberg’s three years overseeing them.)

After receiving his bachelor’s in public policy, Grundberg went to work for Wilson Sporting Goods in Chicago and also got an MBA from Northwestern University. Moreover, he remet his wife in Chicago. He was acquainted with the future Donna Westmoreland Grundberg, ’85, as an undergraduate, but he notes, “She didn’t have anything to do with me at Stanford.”

They have four children. Grundberg says a 15-year-old son and 10-year-old daughter want to attend Stanford, and a 13-year-old son wants to go straight to the PGA Tour. The 6-year-old has yet to announce his intentions.