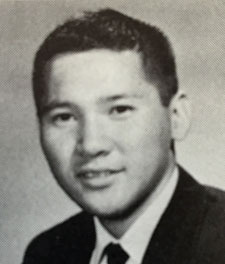 Lance Inouye’s name sits with those of hundreds of other graduates listed in the Class of 2016 commencement bulletin, but there’s a difference. Inouye hasn’t taken a final on the Farm in nearly 50 years.

In the mid ’60s, Inouye was a Stanford ROTC student whose commitment to the Navy kicked in as soon as he earned a degree. And so, with an eye on also earning a master’s before his commission, he successfully petitioned for permission—rarely granted at the time—to take graduate-level classes as an undergrad.

But there was a kink. At commencement in 1968, Inouye received his master’s diploma in aeronautical and astronautical engineering, but not his bachelor’s in mechanical engineering. It took him years to notice the oversight; but once he did, it became a persistent, if minor, thorn in his side.

It may sound silly, he says, but even with a résumé boasting two master’s degrees and a law degree, it’s awkward explaining his lack of a bachelor’s, especially when applying for public boards and commissions in his home state of Hawaii.

So more than a year ago, he turned to Stanford for help, a request that eventually initiated a dive into the registrar’s records to fish out Inouye’s hand-typed transcripts for comparison with a faded, dog-eared copy of a bulletin laying out degree requirements from 1963, Inouye’s first year on campus.

Susan Maher, a retired associate registrar who now works part time in that office, said she feared delving in only to have to inform Inouye that he was a few credits short. But that, happily, turned out not to be the case. And so Inouye, technically at least, joins the Stanford Class of 2016. Congratulations are long overdue.